The Memory of Running Reader’s Guide 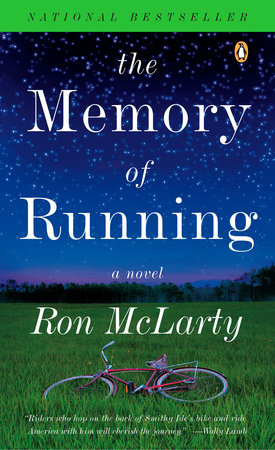 The Memory of Running Reader’s Guide

“Sometimes there are moments when a person has to make a decision, as opposed to just letting things just happen. A person then has to happen himself. I have never done this. Life bounced off me, and bounced me, and now it was going to bounce me to death.” —from The Memory of Running (p. 77)

The Memory of Running is a road novel, the story of one man’s journey across America toward personal redemption. It’s also a story of families and friendships, a story of mental illness and addiction, a story of Vietnam and AIDS, a story of growing up and growing older, a story of first loves and second chances—in short, a novel that traverses a whole landscape of American themes and preoccupations.

Smithson “Smithy” Ide, the protagonist, has all the makings of a classic American antihero. He’s a fat slob in a dead-end factory job who drinks too much, a chain-smoking forty-three-year-old loser lumbering toward an early death. He has no friends, no spouse, no lover—just his elderly parents and a head full of painful memories. When unexpected tragedy strikes, these memories (and a few drinks too many) launch Smithy on an improbable cross-country bicycle odyssey.

The novel interweaves the story of this epic cross-country ride with flashbacks to Smithy’s youth and young adulthood. As he pedals toward California, shedding pounds, sidestepping catastrophes, and reconnecting with humanity, we come to see the people and events that pushed Smithy from a happy youth to a middle-aged wreck: his beautiful and beguiling schizophrenic sister, Bethany, who broke his family’s heart; his tour of duty in Vietnam, which wounded him inside and out; and his childhood friend Norma, whom Smithy cruelly abandoned after an accident left her paralyzed.

Cycling westward, Smithy gets mistaken for a homeless vagrant, a con man, and a child molester—and gets run over, beat up, and threatened with a gun. But Smithy’s essential decency and honesty—his innocence—shine through. As he reaches out to people in trouble he meets along the road, and in turn experiences the kindness of strangers, Smithy begins to face up to his past. He talks to Norma over the phone and finds forgiveness and love. He visits the home of the man who saved his life in Vietnam. And he conjures up his sister, Bethany, who loved him, told him the truth, and ultimately succumbed to her own inner demons.

By the end of his journey, Smithy is finally ready to bury his memories and begin a new life. Literally and figuratively, he has shed the weight of his past. Rediscovering the power of love, reexperiencing the ups and downs of human interaction, and remembering a painful past rather than washing it away with vodka, Smithy has become, almost accidentally, a American hero.

Ron McClarty is an actor best known for his work on television shows such as Sex in the City, Law & Order, The Practice, Judging Amy, and Spenser: For Hire. He has also appeared in films and onstage, where he has directed a number of his own plays, and has narrated more than fifty audio books.

You can visit Ron McLarty online at www.ronmclarty.com.

Learn More About The Memory of Running
print

Driving on the Rim
Thomas McGuane

Where You Once Belonged
Kent Haruf

Run with the Horsemen
Ferrol Sams

The Ecstatic
Victor LaValle and Victor La Valle
Back to Top