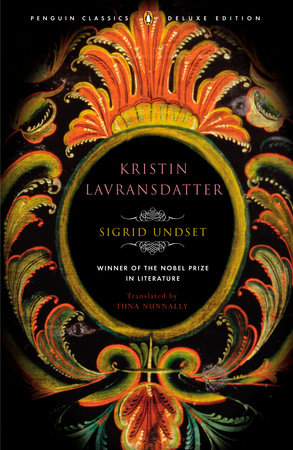 In Kristin Lavransdatter (1920-1922), Sigrid Undset interweaves political, social, and religious history with the daily aspects of family life to create a colorful, richly detailed tapestry of Norway during the fourteenth-century. The trilogy, however, is more than a journey into the past. Undset’s own life—her familiarity with Norse sagas and folklore and with a wide range of medieval literature, her experiences as a daughter, wife, and mother, and her deep religious faith—profoundly influenced her writing. Her grasp of the connections between past and present and of human nature itself, combined with the extraordinary quality of her writing, sets her works far above the genre of “historical novels.” This new translation by Tiina Nunnally—the first English version since Charles Archer’s translation in the 1920s—captures Undset’s strengths as a stylist. Nunnally, an award-winning translator, retains the natural dialog and lyrical flow of the original Norwegian, with its echoes of Old Norse legends, while deftly avoiding the stilted language and false archaisms of Archer’s translation. In addition, she restores key passages left out of that edition, including a sexually explicit love scene and several conversations among the characters that offer crucial insights into their feelings and motivation.

In depicting her country’s vanished culture, Undset, like others in the Modernist era, rejected the romantic view of the past prevalent in mid-nineteenth century literature, music, and art—from Tennyson’s fanciful retelling of the Arthurian legends,Idylls of the King to Wagner’s musical interpretations of Germanic myths to the dreamy paintings of the Pre-Raphaelite artists. Her realistic, unvarnished approach, as A.H. Winsnes notes in his biography, Sigrid Undset: A Study in Christian Realism, has led many scholars to call her “The Zola of Middle Ages.” Undset’s ability to present a meticulously accurate historical portrait without sacrificing the poetry and narrative drive of masterful storytelling was particularly significant in her homeland. Granted independence in 1905 after five hundred years of foreign domination, Norway was eager to reclaim its national history and culture. Kristin Lavransdatter became a touchstone for Undset’s contemporaries, and continues to be widely read by Norwegians today. In the more than 75 years since it was first published, it has also become a favorite throughout the world.

When The Wreath first appeared in English, the New York Times hailed it as “strong and dramatic, founded upon those emotions and impulses which belong not to any especial time or country, but to all humanity.” Against the background of a society ruled by centuries-old Norse traditions and the strictures of the Catholic Church (first established in Norway in tenth century), Undset tells the story of a headstrong young woman who defies the expectations of her much-beloved father, the lessons of her priest, and conventions of society when she is captivated by a charming and dangerously impetuous man. The courtship of Kristin Lavransdatter and Erlend Nikulaussøn is a far cry from the idealistic romances found in the historical novels of writers like Sir Walter Scott. Although she is betrothed to another man and is living in a convent, Kristin and Erlend manage to escape watchful eyes and give free rein to their love and their sexual impulses. When they are finally allowed to wed, they discover that the repercussions of their rebellious behavior are not easily put to rest.

In The Wife, Undset paints a vivid portrait of a marriage buffeted not only by private passions and recriminations, but by the forces of history. Kristin is determined to create a household and a family life that will mitigate the shame she brought upon herself and her parents. As Undset chronicles Kristin’s days as the mistress of Erlend’s ancestral estate and the mother of seven sons, she renders the details of everyday life with astounding precision—the eating and sleeping arrangements in both manor houses and humble peasant homes; the risks of childbirth and of raising children; and the social and religious activities that punctuate each week. Erlend’s involvement in a plot against an unpopular king brings to life the political intrigues percolating in Scandinavia during the period and captures the strong sense of justice and personal freedom that set Norway apart from most other medieval cultures. The inner lives of the characters are illuminated with the same care—from the painful secrets Kristin’s parents harbor to the destructive consequences of Kristin’s pride and resentment and of Erlend’s petulant refusal to accept his responsibilities.

The Cross finds Kristin returning with her husband and sons to her childhood home after Erlend’s narrow escape from the law. Kristin quickly discovers that the community where she was once loved and respected as her father’s daughter is not so willing to accept her and her family. The solicitous attention of her brother-in-law brings Kristin much-needed comfort, but even this relationship is fraught with unspoken tensions. Erlend and their sons, scorned as outsiders who arrogantly refuse to adapt to the customs of the region or its people, are bound to one another with an affection so strong that Kristin herself feels excluded. With the willfulness that is both her strength and her weakness, Kristin devotes herself to maintaining the farm and to instilling in her sons a sense of morality and purpose. The Cross unveils the complexities of maternal love, portraying with power and sensitivity the conflicts that arise as Kristin’s children forge their own identities. It explores, too, the impact of Christianity on a world still emerging from paganism and, as the Black Plague devastates Europe, the significance of the Church’s teachings to people seeking answers to mysteries of life and death, sin and redemption

Sigrid Undset (1882-1949) was born in Denmark, the eldest daughter of a Norwegian father and a Danish mother. Two years after her birth, the family moved to Oslo, where her father, a distinguished archaeologist, taught at the university. Her father’s interest in the past had a tremendous influence on Undset. She was particularly entranced by the dramatic Old Norse sagas she read as a child, later declaring that her exposure to them marked “the most important turning point in my life.”

Undset’s first published works—the novel Mrs. Marta Oulie (1907) and a short-story collection The Happy Age (1908)—were set in contemporary times and achieved both critical and popular success. With her reputation as a writer well-established, Undset had the freedom to explore the world that had first fired her imagination, and in Gunnar’s Daughter (1909) she drew upon her knowledge of Norway’s history and legends, including the Icelandic Sagas, to recreate medieval life with compelling immediacy. In 1912 Undset married the painter Anders Castus Svarstad and over the next ten years faced the formidable challenge of raising three stepchildren and her own three off-spring with little financial or emotional support from her husband. Eventually, she and her children moved from Oslo to Lillehammer, and her marriage was annulled in 1924, when Undset converted to Catholicism.

Although Undset wrote more modern novels, a collection of essays on feminism, as well as numerous book reviews and newspaper articles, her fascination with the Middle Ages never ebbed, and in 1920 she published The Wreath, the first volume of her most famous work, Kristin Lavransdatter. The next two volumes quickly followed—The Wife in 1921, and The Cross in 1922. The trilogy earned Undset worldwide acclaim, and her second great medieval epic—the four-volume The Master of Hestviken (1925-1927) —confirmed her place as one of the twentieth century’s greatest writers. In 1928, at the age of 46, she received the Nobel Prize for Literature, only the third woman to be so honored.

Undset went on to publish more novels—including the autobiographical The Longest Years—and several collections of essays during the 1930s. As the Germans advanced through Norway in 1940, Undset, an outspoken critic of Nazism, fled the country and eventually settled in Brooklyn, New York. She returned to her homeland in 1945, and two years later she was awarded Norway’s highest honor for her “distinguished literary work and for service to her country.” The years of exile, however, had taken a great toll on her, and she died of a stroke on June 10, 1949.