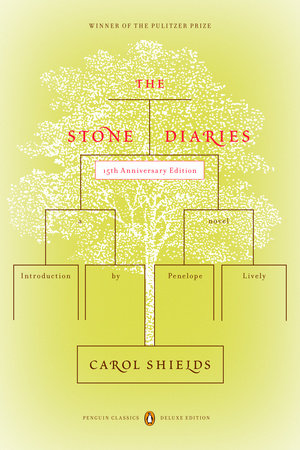 From her calamitous birth in Manitoba in 1905 to her journey with her father to Indiana, throughout her years as a wife, mother, and widow, Daisy Stone Goodwill struggled to understand her place in her own life. Now, in old age, Daisy attempts to tell her life story through a novel. She listens, she observes, and, through sheer force of imagination, she becomes a witness of her own life: her birth, her death, and the troubling misconnections she discovers in between.

“She enlarges on the available material, extends, shrinks, reshapes what’s offered; this mixed potion is her life. She swirls it one way or the other, depending on—who knows what it depends on?the fulcrum of desire, or of necessity. She might drop in a ripe plum from a library book she’s reading or something out of a soap opera or a dream.”

The life in question belongs to Daisy Goodwill Flett, “a middle-class woman, a woman of moderate intelligence and medium-sized ego and average good luck.” In other words, a woman so commonplace that her story would seem barely worth remarking, were it not, perhaps, for her own determination to tell it. And in telling it, give it shape and meaning—even if she must supply these herself.

This is the problem that Carol Shields addresses in The Stone Diaries: how do small lives, the kind most women were once assumed to lead, assume significance and coherence? How closely do our versions of those lives correspond to objective facts? Can facts be said to exist at all in the context of something as changeable and arbitrary as a life? To what extent do “our” stories really belong to us, considering the tendency that other people—parents, spouses, children—have to intrude in them, interpret them, claim them?

The Stone Diaries approaches these problems with seductive prose, a serene wit and an artfulness that is all the more dazzling given the novel’s apparent insistence on the ordinary. Indeed, one of Shields’ conceits has been to disguise her fiction as a “real” biography, complete with period photographs and a family tree. But beneath the scrupulous—if spurious—documentation and bland rural and suburban settings lie incidents as fantastic as the inventions of Gabriel García Márquez: a hugely fat woman dies in childbirth without ever realizing that she was pregnant; a dour Orkneyman journeys back to the island he left decades before, severing ties, jettisoning possessions, and living on to the age of 115 (with the uncanny ability to recite Jane Eyre from memory); a young husband falls to his death ten days after his wedding, possibly as the result of an unexpected sneeze, and his wife, who did the sneezing, never mentions her marriage and its grotesque ending to another soul. Strangest of all, the heroine of this novel passes through her life without ever fully occupying it—an absence that this beautiful and haunting book attempts to redeem.

Shields is the author of several novels and short-story collections, including The Orange Fish, Swann, Various Miracles,Happenstance, and The Republic of Love. Her books have won a Canada Council Major Award, two National Magazine Awards, the Canadian Author’s Award, and a CBC short story award. The Stone Diaries was nominated for the National Book Critics Circle Award and the 1993 Booker Prize, and won Canada’s Governor General Award. It was also named one of the best books of the year by Publishers Weekly and a Notable Book by The New York Times Book Review.

In this collection of stories, Shields illuminates the moments when ordinary people face extraordinary circumstances–wild coincidences, declarations of love, startling revelations. We are drawn, too, into a world of sharply observed characters: a comedy writer whose wife is dying, a couple who still gets Christmas cards from a man they assisted twenty-five years ago, an aging woman cutting the grass.

Autobiography of an Invisible Woman
Happenstance

Two dazzling companion novels, printed in one back-to-back book, tell the stories of Jack and Brenda Bowman, who for nearly the first time in their long marriage, spend a week apart. “Carol Shields is a name to set beside Margaret Atwood and Alice Munro”—Anita Brookner

These twelve stories exhibit Shields’s extraordinary ability to find both meaning and mystery in the chaos of ordinary life. “Infused with a sly humor, these poignant stories revel in the ordinary, with a few side trips towards the sublime.”—The Washington Post Book World

The Republic of Love

Fay, a student of mermaids who finds it difficult to make a commitment, and Tom, a radio talk-show host who commits all too easily to the wrong women, have each given up on romance…until they meet each other. But when reality intrudes they discover that taking up residence in the republic of love requires more than a touch of luck and a lightning bolt of love. “I envy those with The Republic of Love still ahead of them.”—The New York Times Book Review

After her brutal murder, all traces of the existence of Mary Swann, rural Canadian poet, begin to vanish. As her characters try to solve the puzzle of Swann’s disappearing legacy, Carol Shields explores the larger mysteries of the nature of art, as well as the powerful forces that motivate all of us. “One of the best novels I have read this year…deft, funny, poignant, surprising, and beautifully shaped.”—Margaret Atwood

AN INTERVIEW WITH CAROL SHIELDS

What were you trying to accomplish in The Stone Diaries? It seems to be the autobiography of a woman who wasn’t there.

I was interested in the notion of autobiography and, in particular, the idea of women’s life stories. A lot of women are erased from their lives, sometimes as a result of their own actions and attitudes, but mostly for societal reasons. The saddest thing about women like Daisy Goodwill is that they didn’t know what was owed them. They didn’t have the words to say “I want.” Ninety-nine percent of the women of Daisy’s generation never claimed their own lives. Only a few women did–and we have novels about them.

Although it purports to be the autobiography of Daisy Goodwill Flett, The Stone Diaries includes the stories of many other characters as well, and occasionally presents information that Daisy is unlikely to know.

I wanted to have a lot of other voices filtering in and out, representing Daisy’s fantasies of what other people imagined about her. We all wonder how other people see us, and Daisy is no exception. I also wanted to include legend along with facts. The birth scene, for example. Daisy wouldn’t remember her own birth, but doubtless she heard stories about it, remarkable as it was, just as I used to hear stories about my birth when I was a child. I remember my mother would always say, “You slipped out just like a lump of butter!” [Laughter]

Is The Stone Diariesmeant to represent Daisy’s real life? To fill in the gaps that the people around her missed?

Well, you know we all carry around in our heads what we think is our life story. When I read back over my manuscript, I saw that Daisy had somehow leaped over her experiences with childbirth, sexual initiation, and education. But that’s how life stories are. It’s as though you end up your life with a boxful of snapshots. They may not be the best ones, but they’re the ones you have. All the other pictures are in an album somewhere.

Speaking of pictures, what about your novel’s photo section? It’s a highly unorthodox touch that further pushes the envelope between fiction and autobiography. How did you come up with it?

When I read real biographies, I always turn to the photos in the middle. I’m always checking the image against the text. I found the photo of the Ladies Rhythm and Movement Club at a small country museum here in Manitoba. The photos of Daisy’s grandchildren are actually of my own children. I asked them for permission, of course.

The idea of a woman being erased from her own life seems almost unbearably sad, but The Stone Diaries doesn’t read like a sad book.

One of the things that redeems Daisy’s life is her friendships with other women. Lifelong friends like Beans and Fraidy, along with the bridge club companions of her later years. Sometimes I think that those “bridge club biddies” were forerunners of consciousness-raising groups. They were early feminist cells.

In one interview you’re quoted as having an interest in “subversive fiction.” Is The Stone Diaries a subversive novel? In what way?

I love writing novels because the novel is such an accommodating form. You can do such a lot within one. I suppose a contemporary novel isn’t supposed to rely too heavily on coincidence and synchronicity, but The Stone Diaries is filled with coincidences. So are most people’s lives. I like to collect stories of other people’s coincidences because I suspect that that’s how the universe really works. Everything I’ve read about chaos theory bears this out. For a while I was worried because The Stone Diaries didn’t seem to have a plot. And then I read an interview with Patrick White—I love Patrick White—in which he says, “I never worry about plot. I worry about life going on toward death.”

What are you working on presently?

I’m writing a novel about work. I love the idea of work, the things people actually do for a living, and I’ve always been struck by the fact that in most novels people aren’t working. I’d like to look at that.

In the Skin of a Lion
Michael Ondaatje