No! I Don’t Want to Join a Book Club Reader’s Guide 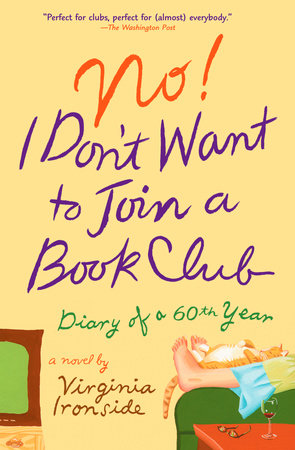 No! I Don’t Want to Join a Book Club Reader’s Guide

print
No! I Don’t Want to Join a Book Club Reader’s Guide

NOTE: We recognize that reading is a personal experience, and we hope that the author interview and questions below will provide a springboard to provoke a lively discussion.
INTRODUCTION
Marie Sharp, a child of the 1960s, is entering her own 60s. Behind her is a life full of experiences: not just marriage, family, divorce, and work but also experimenting with drugs and having unprotected sex. In other words, Marie has lived. She has had adventures. She has been known to be reckless and irresponsible, at least by today’s standards. Now she’s old and wants to feel that way.

In No! I Don’t Want to Join a Book Club, Marie swears off all kinds of things that her friends and contemporaries are embracing: book clubs, yes, but also learning new things like foreign languages and joining gyms. Activities that challenge the mind and body, activities that others like to brag about—these are not for Marie. Writing in the diary that forms the narrative of this novel, she exults in what lies ahead: time to take it easy, refrain from doing what anyone else tells her, relish the diminishing possibilities. Her friends may see her as a contrarian—especially the loyal Penny, who braves the dating scene and struggles with her own self-image crises—but Marie has always been her own person. However, she shocks everyone when she declares she is swearing off sexual and romantic relationships—in short, she is swearing off men. Forever. She doesn’t intend this declaration to be a public one, but of course word gets out.

Marie wants her life to be simple and manageable. She can handle her own hypochondria. She can handle redecorating her bedroom. She can even handle—nay, embrace!—grandmotherhood (that is, when she isn’t sick with worry over the baby’s falling prey to kidnappers or too-small socks). A man would not only confuse matters; he also wouldn’t fit in her new, smaller bed. But amid the simple pleasures Marie craves are real complications she cannot ignore. Some of those dearest to her may not be around to grow old along with her. She must realize that no matter what life one chooses, embraces, or is given, it has only one possible ending.

Still, maybe there are more possibilities ahead for her than she allows herself to dream—or to admit to her diary. Perhaps, even for Marie, this new stage in life won’t turn out quite according to her simple plan.

Virginia Ironside is a journalist, agony aunt, and author, divorced living in West London. She has one son and one grandson.

A CONVERSATION WITH VIRGINIA IRONSIDE
Q. Pardon the obvious question, but do you belong to a book club or have you in the past?

A. No, I have never belonged to a book club and would certainly not wish to read books dictated by a group. I have my own strong preferences for books and they don’t include the usual contemporary fiction featured in most book clubs. Having said that, I know that some book clubs are very good fun—and admit that I belong to a very jolly cinema club that meets every Friday.

Q. What inspired you to create Marie Sharp?

A. Marie Sharp is in many ways me. I just felt so depressed when people sympathized with me for being sixty, as if it were the end of the world, that I wanted to say that being old was actually wonderful and that the last stage of life—well, so far for me—is by far the happiest, most fulfilling and creative period.

I also felt there was a gap in the market. When I was young, The Catcher in the Rye was a wonderful for book for adolescents that captured the mood of the times. There seemed to be no entertaining books for those of us who had reached the age of sixty, except dismal tomes like Autumn Leaves and Armchair Aerobics.

Q. Second obvious question: Do you now keep or have you ever kept a diary? When did you start?

A. I have kept a diary but never kept it up. Daily diaries can get pretty boring, just like life.

Q. What does writing a novel in the form of a diary allow you to do—with story, with character—that a more conventional first-person narrative does not?

A. It is much easier to write a diary, and much easier, I think, to read. You only have to look at Bridget Jones’s Diary or, my favorite, the classic Diary of a Provincial Lady by E. M. Delafield, to see how easily a diary slips down. Read John Evelyn’s diaries, Pepys’s, Keith Vaughan’s, Evelyn Waugh’s, Chips Channon’s, The Diary of a Nobody, Alan Bennett’s diaries, Duff Cooper’s, Kenneth Williams’s, Anne Frank’s, Adrian Mole’s. They are all compulsively readable.

Q. Marie does not particularly like psychotherapists. What would she think about your line of work as an agony aunt?

A. The work of an agony aunt is completely different from that of a psychotherapist—and I think Marie would agree with this. Agony aunts give free advice. They also give public advice. They are up there in the public domain and people can laugh about them and take the piss out of them. Psychotherapists enter completely private, personal, and powerful relationships with vulnerable people for money. There are some very good psychotherapists around but I’m afraid there are an awful lot who can be, often unwittingly, abusive.

Q. You have written a number of self-help books, and No! I Don’t Want to Join a Book Club raises a lot of issues that could be covered in such books. Why did you choose to address them in fictional form?

A. Around four of my fifteen books are self-help books, most of which are about loss of one kind or another—death, pet loss, and subfertility. The others are novels and an autobiography about myself and my alcoholic mother, a fashion icon, calledJaney and Me. I didn’t intend this current book to be in any way a self-help book in disguise. I wrote Book Club to make people laugh and to make them feel good about getting older, not to solve any problems.

Q. Your novel points out many of the wonderful bonuses of growing older. Why do you think so many people paint such a dreadful picture of aging and overlook the positive aspects of the process?

A. I think maybe one of the reasons is that many people have had a very happy youth and middle age. I have been dogged by depression a great deal of my life and have quite honestly always seen life like one of those interminable daylong plays at the National Theatre—the ones divided into three parts and you have to take sandwiches. In the morning you just don’t know how you’re going to hack sitting there for hours, but as four o’clock comes and it’s nearing the end of the third part, you start to think “Hurrah! It’s not so bad after all! And anyway, soon I’ll be able to go home and have a delicious drink!” Or, indeed, several delicious drinks. I just love feeling that the vast majority of my life is behind me and there’s only a little bit left.

The other reasons of course that I love being old are that I have far more confidence than I used to. I don’t feel nearly as guilty. I feel more and more like me every year that goes by. And of course I have two wonderful grandsons—who mean more to me than any man has ever done. I finally know what it means to be in love!

Learn More About No! I Don’t Want to Join a Book Club
print
Back to Top