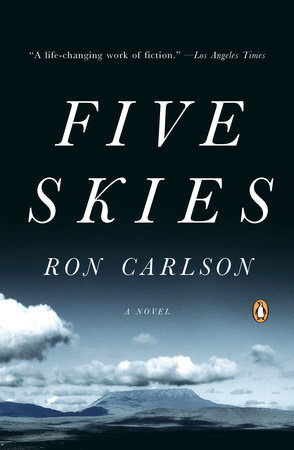 In his first novel in twenty-five years, Ron Carlson tells the story of three men—each locked in his own isolation, each trying to escape a painful past—who come together for a strange job: to build a stunt ramp in the “ruined mountains” seventeen miles south of Mercy, Idaho. On the surface, it is a simple story, marked by the formal tightness and emotional subtlety that have long characterized Carlson’s fiction. But the novel’s depths reach to the very heart of human suffering, ultimately revealing the healing power of work done well and the redemption that can be found in telling one’s story. In prose that is lyrical, precise, and deeply attuned to the fluctuations of the human spirit, Five Skies offers readers an extended meditation on the relationship between past and present, grief and the unburdening of grief, self-concealment and self-revelation.

When hiring Art Key and Ronnie Panelli, Darwin Gallegos senses that things are “all wrong.” He can tell from Ronnie’s jittery gaze that he’s been in jail and senses that Key has been damaged in some deep, essential way. But Darwin’s in a hurry and hires them anyway. On the drive up to the job site, they spin off a snow-covered mountain road, and this accident, which could easily have been disastrous, sets the tone of impending tragedy that haunts the novel. The site, Darwin notes, is a “nice place,” prompting Key to respond, “beautiful. . . . We’ll fix that,” for the ramp—and the motorcycle jump across the gorge for which the ramp is being built—makes clear the sacrifice of the beauty and wildness of the American West to greed and spectacle and high-risk recklessness. In fact, Key is appalled by the job because of what it is and because of the memories it evokes of a tragedy in his own past, but he decides he would “just do it as a job, not get involved in anything else.”

But not getting involved proves to be impossible as Key is drawn into the lives of Darwin and Ronnie—and brought closer to his own grief and guilt. Ronnie is running from the law, from a painful family life, and from his past as a petty shoplifter and unsuccessful thief. Darwin is haunted by the sudden and inconsolable death of his wife several years before. Each of them has been set adrift by a pain they are trying to escape. But in the shared pride of doing a job right, even if it is a bad job, they establish a kind of stoic intimacy and gradually reveal themselves to each other, a fact that in the end allows a kind of redemption—and makes its terribly high cost painfully clear.

ABOUT RON CARLSON
Ron Carlson is the award-winning author of four story collections, including At the Jim Bridger and The Hotel Eden, two novels, and a young adult novel. His stories appear regularly in Harper’s, The New Yorker, GQ, Esquire, Playboy, The Best American Short Stories, and The O. Henry Prize Stories. He is the director of the graduate fiction program at the University of California, Irvine.
A CONVERSATION WITH RON CARLSON

Q. This is your first novel in twenty-five years. Why did you wait so long?

A. I wasn’t waiting really. I’ve been writing stories steadily and they ranged widely, serious to comic, and then some years ago I imagined a scene on a high desert river gorge with two men talking about work, the things they had made that had lasted, and I saw that to treat them, I would need a larger form. I would need to tell of an entire summer and that would require a novel.

Q. What challenges does the novel form present for you?

A. The opportunities in a novel are so different from those in a story. The world is larger and requires patience in every way. The writing isn’t full of sudden surprises, but discoveries that evolve credibly over time. The changes accrue steadily and you have to live in them as the wear and the tear and the real lessons gather. It is such a different pleasure from those in writing the sharp surprises that appear in many stories. The light doesn’t flash or surprise you but it breaks evenly and surely. I loved being in the world with these men for that longer season.

Q. Characters like Key, Darwin, and Ronnie are becoming increasingly rare in American fiction. What draws you to write about such men?

A. I wanted these to be simple men, each hauling his life forward as well as he could. They have been reduced by their histories, and they are weary or incapable of subterfuge. Sometimes, all you’ve got is the day, and I tried to use the days of their time together to test them, to see how they might emerge.

Q. What interests you about the kind of work you describe in the novel? Do you see parallels between the pride and care someone like Arthur Key takes in his work and your own work as a writer?

A. I’m not sure. I worked as carefully on this book as on any project I’ve had in my hands, and I measured twice before cutting once. (But I did cut more than once.) I like Arthur Key, his care, his understanding of materials and design, and his hesitance to be rash or hurried.

Q. Have you done the kind of work you describe so precisely in the novel? Did you do much research for Five Skies?

A. My father was a very fine craftsman and engineer, and I saw him every day admire the problems before him and approach them with the best design and the proper tools. We talked all the time about these things and he told me about the famous accidents in building design, bridges and hotel balconies. His drawings were beautiful. He gave me the equation about a motorcycle’s trajectory over a river gorge in a wonderful sketch. I still have it. My two brothers and I are fairly handy, though they are better at such things than I.

Q. Why is talking—telling one’s story—so important in Five Skies, for all the main characters, but especially for Arthur Key?

A. It is hard to talk, to build a sure story, something true that actually helps the current moment. We have things welded into our hearts that seem they will never open, and Arthur Key knows that he needs to tell his story; it is the only method forward. And he knows he will need new muscles to approach this important task.

A. I started with them and there was no other choice. I did know a fine man named Darwin a long time ago. I consider them real names. I was not trying for anything symbolic, any more than all of our names are.

Q. Will you return to writing stories now or are you at work on another novel? What’s next for you?

A. I am finishing another novel right now. It has my attention in the way I’d hoped. Since finishing Five Skies I have written a number of stories and I’m sure there are more ahead, but the long form has sort of swept me away, and I’m happily taken.

The Tiger in the Grass
Harriet Doerr

The Temple of Gold
William Goldman

Inside
Alix Ohlin
Back to Top