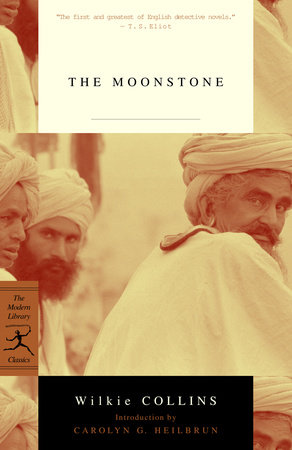 1. T. S. Eliot called The Moonstone “the first and the best of English detective novels.” What classic elements of mystery are present in this story, and how has the genre of detective fiction evolved from the 1860s to the present day?

2. Discuss Collins’s employment of first-hand accounts to tell the story of The Moonstone. What does each narrator bring to the story, and how skillful is the author in shifting from comedy to pathos, romance to suspense? Is it an effective method of storytelling?

3. According to his 1868 preface, Collins’s stated objective was to trace the influence of character on circumstances. Whose character exerts the strongest influence on the plot of this novel, and how?

4. Drawing on the Prologue, as well as the opinions expressed by characters including Mr. Betteredge and Mr. Murthwaite, what may be determined about Collins’s views on British imperialism? Does he support or defy racial stereotypes in his depiction of the trio of Brahmins?

5. When Penelope suggests to her father that Rosanna Spearman has fallen in love with Franklin Blake, Betteredge bursts out laughing at the “absurdity” of it. What additional examples of class distinctions are evident in The Moonstone?

6. Dorothy L. Sayers, the acclaimed detective novelist, noted that, for his time, Collins was “genuinely feminist” in his treatment of women. Do you agree?

7. Discuss the role that opium plays in The Moonstone. Is it a believable plot device? Does the fact that the author created the story while under the influence of laudanum lend credibility to his depiction of its effects?

8. Charles Dickens, longtime friend and mentor to Wilkie Collins, edited and published The Moonstone in its initial serialized form. What do these two writers have in common in terms of style, structure, and characterization? How do they differ?

Learn More About The Moonstone
print

The Law and the Lady

Bleak House
Back to Top