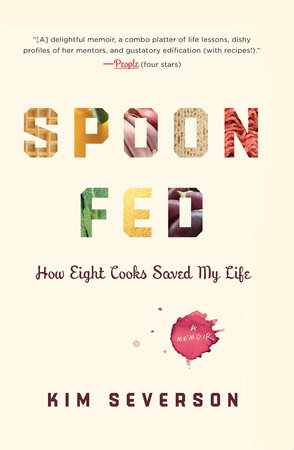 Somewhere between the lessons her mother taught her and the ones she is now trying to teach her own daughter, Kim Severson stumbled. She lost sight of what mattered, of who she was and who she wanted to be, and of how she needed to live her life. It took a series of encounters with female cooks (including Marion Cunningham, Alice Waters, Ruth Reichl, Marcella Hazan, and Rachael Ray) to reteach her the life lessons she had forgotten—and many she had never learned in the first place. Some as small as a spoonful, and others so big they saved her life, the best lessons she found were delivered in the kitchen.

An emotionally rich, funny, multilayered memoir and an inspirational, illuminating series of profiles of the most influential female cooks, Spoon Fed is Severson’s story and the story of the women who have changed her life—and ultimately, a testament to the wisdom that can be found in the kitchen.

Kim Severson has been a food writer for The New York Times since 2004. Previously, she was a food writer and editor at the San Francisco Chronicle, where she received four James Beard Foundation Awards and the Casey Medal for Meritorious Journalism.


Learn More About Spoon Fed
print
Back to Top