The Deep End of the Ocean Reader’s Guide 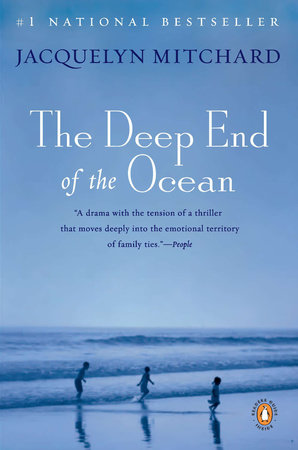 The Deep End of the Ocean Reader’s Guide

print
The Deep End of the Ocean Reader’s Guide

The Deep End of the Ocean is a story about every parent’s worst nightmare: the loss of a child. It is a story that is all too familiar to many of us, made frighteningly routine by the young faces emblazoned on milk cartons or steeped in pathos by Hollywood scriptwriters. In Jacquelyn Mitchard’s deft hands, however, the story of the Cappadora family is neither routine nor cliched. It is chillingly and beautifully real.

Photographer Beth Cappadora is far from the ideal mother and wife. She is harried, impatient, disorganized, and ambivalent about her husband and her kids—faults that come back to haunt her after her middle child disappears in a crowded hotel lobby. The ensuing decade of unbelievable grief and pain, of Beth’s attempt at recreating a life after her son disappears, is lovingly documented in this electrifying novel. Like photographs in a family album, scenes from Beth’s life are offered in startling detail: the scoops of coffee she forces herself to measure out each day; snatches of conversation between a husband and wife doggedly trying to return to a normal life; the cynical observations of her oldest child as he struggles to be noticed and loved; the “purple elephants” that loom in every family’s living room—unspoken pain so huge one can only step around it, for to acknowledge it is too terrifying a prospect. And, like all good photographs, this one is not without many shades of gray. There are no easy heroes in this story, although heroism abounds. While the novel speeds along with the pace of a thriller, its drama reaches far beyond the story of Ben’s disappearance. The mystery of what happened to Ben is only one of the mysteries that envelop this novel. In revealing what happens to the Cappadora family, Mitchard offers us no easy answers. Instead she raises difficult questions about the nature of grief and loss, about the value of families of all kinds, and about the gifts of love, redemption, and forgiveness.

Jacquelyn Mitchard’s venture into fiction with her first novel, The Deep End of the Ocean, marks the latest evolution in her diverse and distinguished career as a writer. A native of Chicago, Mitchard graduated from the University of Illinois and Rockford College and became a newspaper reporter. From 1984 to 1988 she was metro reporter for the Milwaukee Journal-Sentinel. Her weekly column, “The Rest of Us,” has appeared in the Journal for over a decade and will be nationally syndicated starting in September 1996.

From 1989 to 1993, Mitchard was the speechwriter for now U.S. Secretary of Health and Human Services Donna Shalala, while Shalala was Chancellor of the University of Wisconsin. Mitchard has also been a contributing editor for Parenting magazine since 1990; she is a regular columnist for TV Guide and has been a regular contributor to such national magazines as Money, Self, and Woman’s Day. She is the author of two nonfiction books,Mother Less Child: The Love Story of a Family and a biography of Jane Addams for teenagers. She has also written two screenplays with her writing partner, Amy Paulsen: A Serpent’s Egg for cable television and Typhoid Mary for feature development. Her essay on adoption was anthologized in the Adoption Reader.

The mother of five children, Mitchard lives in Madison, Wisconsin, where she is at work on a second novel entitled The Most Wanted.

“The Deep End of the Ocean burns itself into the memory line by line. It is by turns lyrical and startling, brilliant.” —Kaye Gibbons

“A beautifully timed, wrenchingly told story of a family’s worst nightmare… has the pace of a thriller with the emotional wallop of August and Endless Love.” —The Boston Sunday Globe

“So well observed and perceptive it’s hard to shy away from… masterfully paced… A story… of one family’s slow tumble back into light.” —Los Angeles Times

“Mitchard delivers a drama that has the tension of a thriller but moves more deeply into the emotional territory of family ties.”—People

“[A] rich, moving and altogether stunning first novel… Readers…will find this compelling and heartbreaking story—sure to be compared with The Good Mother—impossible to put down.” —Publishers Weekly, starred boxed review

“Riveting…. Mitchard keeps her compassionate eye focused… [as she] examines love and loss, and what it means to be a family.” —Glamour

A CONVERSATION WITH JACQUELYN MITCHARD

The Truth Depends on Who’s Telling It

How did you come to write The Deep End of the Ocean?

I dreamed the story about three years ago. For a year after that I didn’t do anything with it beyond the notes I made about the dream. I’d never written a novel before, but the dream was clear and astonishing. And I’m not much of a dreamer in the ordinary sense.

After your long career writing nonfiction, did you find the transition to writing fiction difficult?

It was the hardest thing I’ve ever had to do professionally, to make that transition. It’s the difference between accompanying yourself on the guitar and conducting an orchestra. It was tremendously taxing for me. The only training I had for writing fiction was reading fiction.

You’ve written journalistic pieces on adoption and the nature of identity, which continue to be topics in the news. Did your research, and the custody cases in the media, influence your writing of the novel?

Of course. And I’m sure that more than that, it influenced my subconscious to the degree that I had that particular dream. The questions about nature and nurture are vexing to all parents, whether they’ve given birth or adopted children.

Did you draw on your own experiences while writing this book?

I drew on my experiences growing up in an Italian and Irish neighborhood on the West Side of Chicago. And the people, the loves, the jealousies, and the friendships of my youth drift in and out of the book.

Throughout the novel you alternate narrators from Beth to Vincent. What was your reason for doing so?

I’m also doing that in the novel I’m working on now. Some books just happen that way; they are like blind men describing an elephant. The truth depends on who’s telling it, and that was certainly true in this story. Beth and Vincent, combatants in the novel, are poles apart in their ways of seeing the same basic facts.

Which character in the novel do you most identify with?

Vincent. If there’s anybody who I might say is like I am, it would be him; I remember that caged, stubborn anger of adolescence.

As a mother, was it difficult for you to write about the kidnapping of a child?

It was truly painful. The most painful part was also the most necessary, and that was talking with and listening to people who had had a child kidnapped.

Have the reactions to the book been strong?

Absolutely. Especially from people who have not yet read the book. People believed at first that this book was a crime thriller and that the unraveling of the kidnapping case was what this book was about, instead of being about family bonds and what constitutes them. Much of that sort of reaction, that wincing, that shuddering at the book, is much more pronounced from people who have not read it.

Was there a piece of advice that was inspirational to you in pursuing The Deep End of the Ocean?

Jane Hamilton said to me, “This story belongs to you, so don’t be afraid of it. Just go ahead and tell it.”

What advice would you give to aspiring novelists?

Two pieces of advice, and they’re in order of importance. One, read a lot more than you think you have time for. And two, never let anyone talk you out of your dreams.

Learn More About The Deep End of the Ocean
print

While I Was Gone
Sue Miller