The Brightest Star in the Sky Reader’s Guide 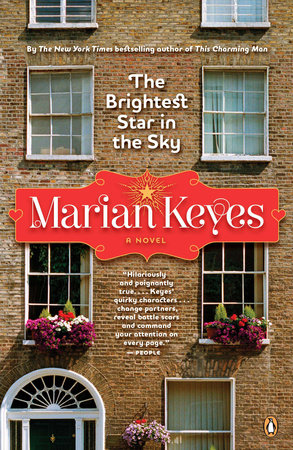 The Brightest Star in the Sky Reader’s Guide

print
The Brightest Star in the Sky Reader’s Guide

The occupants of the townhouse at 66 Star Street could not be more different if they tried, and they each face their own volatile mix of exactly the same issues: love, lust, heartache, and forgiveness. Over the course of sixty-one days, these neighbors, the core characters of Marian Keyes’s new novel The Brightest Star in the Sky, become more closely entangled than they ever thought possible. There’s Matt and Maeve, the young married couple on the ground floor who strive to be good and yet are dragged down by a secret in their past that they cannot bring themselves to discuss. Upstairs, Lydia, a twenty-something cabbie, talks tough but harbors a hidden tenderness, spending her spare time caring for her sick mother. On the top floor lives Katie, a music PR executive who has just turned forty and is questioning her choices in life, not to mention her relationship with a man who has tons of money but too little time. And circling above them all is a knowing little spirit who peeks in and out of their struggles as it decides whose life it should land in next.

Keyes is known for her fearlessness, sensitivity, and wit, and, as with her previous books, The Brightest Star in the Skycrackles with the energy of real life. She is never afraid to tackle challenging topics or prickly emotions, and in this novel she grapples with issues as complex and difficult as depression, illness, and even suicide—yet Keyes never loses her sharp sense of humor. Like a good best friend, she’s ready with a smile when things are at their darkest, able to generate a laugh in the face of pain. In addition, Keyes has added a touch of magic to her mix of characters in the form of Jemima and Fionn. The elderly Jemima works as a phone psychic and hides her true intuitive powers, while her foster son (and aspiring actor) Fionn is so sexy and flirtatious, even his photographs wink. Over the course of the novel, this potent cast of characters swaps partners, changes jobs, and reevaluates their lives, but not even the mysterious spirit, who sees into the hearts, hopes, and fears of all the occupants of Star Street, can predict the terrible event, years in the making, that will bring them all together—and the wonderful news that will change their lives.

In The Brightest Star in the Sky, Keyes has created a kaleidoscope of a story, real life improved by a small dose of the kind of magic we all need, and a large dose of the magic we provide each other. As her characters push through sufferings large and small, Keyes steers them toward conclusions that are both satisfying and unexpected, and the characters find, in the end, the beginning of their new lives.

Marion Keyes is the author of ten novels, including This Charming Man and Anybody Out There?, as well as two collections of personal essays. Her books have sold millions of copies worldwide and have been translated into thirty-two languages. She lives with her husband in Dún Laoghaire, Ireland.

Learn More About The Brightest Star in the Sky
print

Confessions of a Shopaholic
Sophie Kinsella

One Day (Movie Tie-in Edition)
David Nicholls
Back to Top