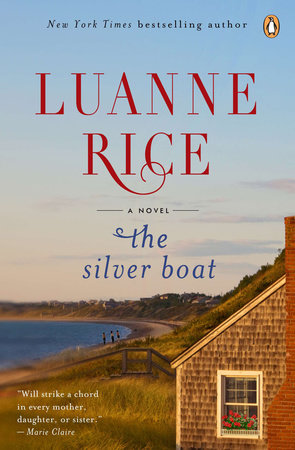 INTRODUCTION
Ever since she was a girl, Dar McCarthy’s favorite constellation has been “the Pleiades, sisters clustered together” (p. 35). Now, decades later, closeness with her younger sisters, Rory and Delia, continues to define her—almost as much as the loss of their father, who abandoned them when Dar was just twelve years old. So when their mother dies and the three sisters can no longer afford to keep the family home on Martha’s Vineyard, they gather for a final visit to clean out a house filled with memories. Each is grappling with a private grief until a bundle of old letters hints at a different ending to the tragedy that has marked all their lives.

“Back when they’d been kids… every boy on the Vineyard had wanted Rory” (p. 25), but it was Jonathan Chase—the scion of another eminent Vineyard clan—who won her. After a rocky start, they settled down and began to raise a family. But Rory is still reeling from her mother’s recent death when she discovers that her marriage is not as solid as she’d imagined.

Delia, the youngest, put down roots furthest from the Vineyard. “Jim, Delia’s husband… considered it too snobby” (p. 13) and usually skipped the family get-togethers to stay at home in Annapolis. So Delia would come with their only son, Pete, who grew to love the ocean and its wild beauty—until he fled a paternity suit two years ago. Delia’s been nursing her heartache ever since.

Unlike her sisters, Dar has always been a loner. She returned after art school to live in a cottage on the perimeter of Daggett’s Way, the main estate. There, Dar cared for their aging mother, Tilly, and created a successful series of graphic novels featuring Dulse, a water spirit with two sisters. She also drank until she hit bottom, and was saved only by AA and the fear of losing her muse.

In the midst of their packing and memories, Dar unearths some letters from Michael McCarthy, their father, to their mother. Michael was a penniless black-Irishman who came to the Vineyard in search of land he believed to be rightfully his. He fell in love with Tilly, but her mother, Abigail, accused him of being after the family property. She continued to scorn him even after the girls were born.

For a time they lived on Abigail’s largesse and Michael’s scant wages. Then, he built the Irish Darling and sailed the boat solo to Ireland. He wrote: “I won’t come back home until after I retrieve what I’m owed” (p. 89). He sent word of his arrival, but never returned. Inspired by his letters, the three sisters embark on an Irish adventure that will transform both their past and their future.

Luanne Rice is the author of twenty-nine novels. She lives in New York City and Old Lyme, Connecticut.

A CONVERSATION WITH LUANNE RICE
Q. You made your writing debut in 1985 with Angels All over Town. The Silver Boat is your twenty-ninth novel. How—if at all—has your writing process changed over time? Have the Internet and other technological advances affected your writing experience?

In many ways my process has changed very little. My novels always begin with a character. I wait for her to tell me who she is; often she inhabits my dreams. Once I know her name, I’m ready to start writing. Although I now work on a MacBookPro 15, I still like to write the earliest scenes on a yellow legal pad with a fountain pen. The Internet makes research go faster, but something is lost. It’s too easy to search for information, take what I need, and move on. I prefer to do research from books, getting lost in the background and immersed in the realm of whatever I’m trying to learn.

Q. The importance of family is a recurring theme in your novels. How did your own upbringing influence your decision to become a writer?

My family was loving but complicated. Our house was filled with secrets and bass notes. As a child I was a detective, listening at walls and going through drawers, looking for answers to what was wrong. My writing has been my lifelong solution to figuring things out, finding the love I know was there, learning everything I can about the way families work, ways of loving and trying to be happy.

Q. “Was that the inspiration for Dulse’s latest adventure? Dar wasn’t sure. She only knew that her ideas came from deep down, experiences and emotions of her own” (p. 282). Part of what makes your novels so heartfelt is that each of them comes from a deeply personal place. What was your inspiration for The Silver Boat?

The answer has three parts:

a) Like the McCarthy sisters, my sisters and I had to face what to do with our beloved family beach cottage after our mother died. It was an immense challenge. The house contained so many ghosts and memories. My grandparents had built it; no other family had ever occupied it. It sits on a granite hill, and the top step still has three pennies placed there by my grandfather in 1938, the year it was built. We put it on the market for ten seconds—selling felt unthinkable. My sisters were very generous and let me buy them out. I still want it to be the family house.

b) My father had a way of disappearing. Not forever, like Michael McCarthy, but frequently, and without explanation. I’ve been writing my way into that situation my whole life.

Q. Harrison is such a glorious character. Is he based on someone you’ve known?

Yes, but like the character, he would want to remain a mystery.

Q. In your blog, you have a section called “Advice to Young Writers.” What is the one bit of advice that you consider most important to a writer just starting out?

Write every day; don’t worry what your parents, true love, or teacher will think; go to the library, find the shelf where your book would be, and imagine it right there.

Q. In an alternate universe, is Luanne Rice still a novelist, or is there a “road untaken” that the other Luanne has followed?

One of the best parts of being a writer is that I get to take all those roads; for months on end I’ve lived the lives of an oceanographer, gardener, sculptor, anthropologist, veterinarian, actor, beachcomber, researcher at the Louvre, and many more.

Q. Poetry always has a prominent supporting role in your novels. Who are your favorite poets, and why?

W. B. Yeats for the language, beauty, mysticism; Eavan Boland for her strength and evocation of Dublin; Mary Oliver for her connection to nature and the sea; Jim Harrison and Ted Kooser for their friendship; my sister Maureen Rice Onorato because her work is tender and powerful.

Q. Dulse is another name for a type of seaweed also called “Irish moss.” Why did you give her this name?

Dulse’s element is water. She is a fluid character, flowing in and out of fantasy and dreams. She leads Dar deep into her own subconscious, allowing her to bring forth things buried inside, answers she didn’t know she had.

I chose the name because it’s beautiful to say. Also in honor of the seaweed that fills tidal pools, hides sea creatures, smells like life and death, and because I love its Latin name, Chondrus crispus.

Also because the short story “Dulse,” by Alice Munro, affected me greatly when I first read it in The New Yorker.

Q. You describe Dulse and her world so vividly that the reader can really picture the pages. Is there a graphic artist whose work inspired Dar’s?

My niece Amelia Onorato inspired me and helped me research the character. She is a writer and an artist, getting her master’s degree in cartoon studies, working on her first graphic novel.

Q. Have you found the seed of your next novel yet? If so, could you share a bit of the story?

It starts with a crime, continues with an unexpected visitor, threads of estrangement, lost love, and the kind of deep love a person can have for someone she’s never even met.

The Language of Light

The Elegant Gathering of White Snows

One True Thing
Back to Top