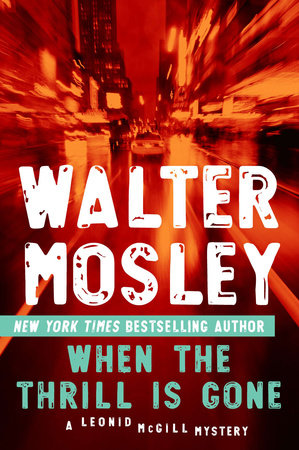 print
When the Thrill Is Gone Reader’s Guide

Leonid McGill is back, in the third installment in Walter Mosley’s latest New York Times bestselling series. The economy has hit the private-investigator business hard, even for the detective designated as “a more than worthy successor to Philip Marlowe” (The Boston Globe) and “the perfect heir to Easy Rawlins” (Toronto, Globe and Mail). Lately, Leonid McGill is getting job offers only from the criminals he’s worked so hard to leave behind. Meanwhile, his life grows ever more complicated: his favorite stepson, Twill, drops out of school for mysteriously lucrative pursuits; his best friend, Gordo, is diagnosed with cancer and is living on Leonid’s couch; his wife takes a new lover, infuriating the old one and endangering the McGill family; and Leonid’s girlfriend, Aura, is back but intent on having some serious conversations…

So how can he say no to the beautiful young woman who walks into his office with a stack of cash? She’s an artist, she tells him, who’s escaped from poverty via marriage to a rich collector who keeps her on a stipend. But she says she fears for her life, and needs Leonid’s help. Though Leonid knows better than to believe every word, this isn’t a job he can afford to turn away, even as he senses that—if his family’s misadventures don’t kill him first-sorting out the woman’s crooked tale will bring him straight to death’s door.

Walter Mosley is the author of more than 34 critically acclaimed books, including the New York Timesbestselling mystery series featuring Easy Rawlins. His work has been translated into 21 languages and includes literary fiction, science fiction, political monographs, and a young adult novel. His short fiction has been widely published, and his nonfiction has appeared in The New York Times Magazine and The Nation, among other publications. He is the winner of numerous awards, including an O. Henry Award, a Grammy, and PEN America’s Lifetime Achievement Award. He lives in New York City. Author website: waltermosley.com


Learn More About When the Thrill Is Gone
print

The Lake of Dead Languages

An Honest Living
Back to Top