A Sense of Direction Reader’s Guide 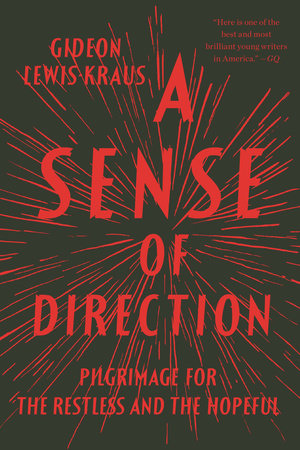 A Sense of Direction Reader’s Guide

In medieval times, a pilgrimage gave the average Joe his only break from the daily grind. For Gideon Lewis-Kraus, it promised a different kind of escape. Determined to avoid the kind of constraint that kept his father, a gay rabbi, closeted until midlife, he moved to anything-goes Berlin. But the surfeit of freedom there paralyzed him, and when a friend extended a drunken invitation to join him on an ancient pilgrimage route across Spain, he grabbed his sneakers, glad of the chance to be committed to something and someone.

Irreverent, moving, hilarious, and thought-provoking, A Sense of Direction is Lewis-Kraus’s dazzling riff on the perpetual war between discipline and desire, and its attendant casualties. Across three pilgrimages and many hundreds of miles-the thousand-year-old Camino de Santiago, a solo circuit of eighty-eight Buddhist temples on the Japanese island of Shikoku, and, together with his father and brother, an annual mass migration to the tomb of a famous Hasidic mystic in the Ukraine-he completes an idiosyncratic odyssey to the heart of a family mystery and a human dilemma: How do we come to terms with what has been and what is-and find a way forward, with purpose.

Gideon Lewis-Kraus has written for Harper’s, The Believer, The New York Times Book Review, Los Angeles Times Book Review, n+1, McSweeneys, The Nation, Bookforum, Slate, and other publications. A 2007-8 Fulbright brought him to Berlin, a hotbed of contemporary restlessness where he conceived this book and more or less continues to live.


Learn More About A Sense of Direction
print

A Gift from Brittany

Beyond the Sky and the Earth

Reading Jackie
Back to Top