The Book of Life Reader’s Guide 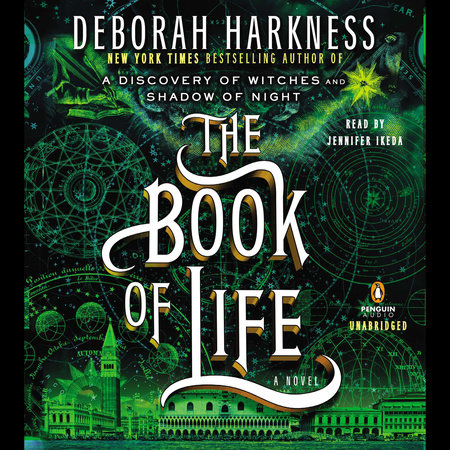 The Book of Life Reader’s Guide

In The Book of Life, historian-turned-novelist Deborah Harkness delivers the breathtaking final installment of her #1 New York Times bestselling All Souls Trilogy. At the end of Shadow of Night, time-walking weaver witch Diana Bishop and vampire Matthew Clairmont are newly returned from the year 1591. There—after an extended sojourn in France with Matthew’s father, Philippe de Clermont—they pursued the mysterious volume, Ashmole 782, from the court of England’s Queen Elizabeth to Emperor Rudolf II’s Prague. Now back in the present, married, and expecting twins, Diana and Matthew must out-maneuver both the Congregation and an even more sinister enemy who’s been lurking in the shadows since the very beginning.

Much has changed since Diana and Matthew embarked on their journey. Emily Mather—the beloved partner of Diana’s aunt, Sarah—has died under suspicious circumstances. Was it the Congregation? Diana suspects yes, and she is prepared to make them pay. While Satu easily dominated a spellbound Diana in their first encounter, the witches in Elizabethan England helped Diana to unlock her unique abilities as a weaver witch. Accompanied by a firedrake named Corra, the Diana that returns to the present shimmers with power. As her nephew Gallowglass states, “I did warn everybody that Auntie Diana wasn’t going to be the same witch she was before” (p. 9).

Diana also returns as Philippe’s blood-sworn daughter. Baldwin—the official head of the de Clermont clan—was unwilling to defy the Congregation and support Matthew’s relationship with Diana. Now, Baldwin is compelled to treat Diana as a sister. Despite their father’s vow, however, the rift between Baldwin and Matthew grows wider—especially after Baldwin learns that Matthew is tainted by the vampire scourge known as blood rage. Meanwhile, Benjamin—the son whom Matthew renounced centuries ago—launches a ruthless game of cat-and-mouse designed to topple the de Clermonts and to acquire both Ashmole 782 and Diana for his own nefarious purposes.

At a Yale University lab, Miriam, Marcus, and Diana’s best friend, Chris, work furiously to uncover the genetic roots of blood rage. Although Marcus did not inherit his father’s blood rage, he is a carrier, and the de Clermonts must face the possibility that Diana and Matthew’s unborn twins will be infected—especially after two familiar faces from 1591 unexpectedly appear in New Haven. The secret of blood rage may also be locked within Ashmole 782, so Diana sets out to find the final missing page, hoping that—once returned to wholeness—the volume’s hidden text will reveal itself.

As old friends—and older enemies—converge for a final battle, Diana and Matthew must face their darkest fears to protect the new lives they have created. Masterfully drawing together timeless themes of passion, loyalty, and family with the history, magic, and science that have dazzled readers from the very first pages of A Discovery of Witches, Deborah Harkness’s The Book of Life is a triumphant conclusion to one of the most beloved series of recent times.

1. Throughout The Book of Life, the ghosts of Philippe de Clermont and Emily Mather observe what their loved ones are doing in the world of the living. Have you ever felt the protective presence of friends or family who have passed on?

2. Although we don’t meet Matthew’s nephew Gallowglass until Shadow of the Night, we learn that—under orders from Philippe—he has been protecting Diana from afar since she was born. We also learn that Gallowglass has fallen deeply in love with Diana. How did this knowledge affect your opinion of him? Are there ways in which he might have made Diana a better mate than Matthew?

3. After they meet at Sotheby’s in Shadow of Night, Marcus and Phoebe fall in love. Phoebe agrees to become a vampire in order to become a near immortal like Marcus. Compare her decision to Diana’s decision to remain a warmblood. What are the pluses and minuses of each woman’s choice?

4. Advances in genetics have now made it possible for us to learn if we carry genes for a variety of heritable diseases. Would knowing that your romantic partner was a carrier for something as potentially dangerous as blood rage prevent you from marrying and/or having children with him or her?

5. Matthew’s centuries-old decision to let Benjamin live set in motion a chain of events that threatens Diana as well as their newborn twins. To what extent is Matthew responsible for the suffering that Benjamin has caused?

6. Several characters from earlier in the series return to play a part in the final volume, including Jack, Father Hubbard, and Timothy Weston—the daemon from the Bodleian. Whose reappearance astonished you the most? Whose absence did you find most painful?

7. After his violent confrontation with Matthew at the twins’ naming ceremony, Baldwin transforms from imperious bully to gracious brother. If you were Diana, would you be able to forgive him for his earlier behavior?

8. Matthew deliberately walks into Benjamin’s trap, initiating the Queen’s Gambit, a chess move that he habitually avoids in order to protect his queen. In this case, he puts his queen—Diana—into play against Benjamin. Were you surprised by Matthew’s decision? Would it have been possible to overcome Benjamin if Matthew hadn’t allowed Diana to risk her life?

9. The de Clermonts eventually discover that Gerbert—the vampire who led the congregation in denouncing Matthew and Diana’s relationships—had himself been consorting with witches and daemons for centuries. Unfortunately, the news is full of illegal and often hypocritical acts committed by people in positions of power. Do you think that it’s power that corrupts, or are the corrupt more inclined than most to seek power?

10. What do you think the future holds for Matthew and Diana? Which characters from the series would you like to have learned more about?

Deborah Harkness is a #1 New York Times bestselling author and a professor of history at the University of Southern California. The recipient of Fulbright, Guggenheim, and National Humanities Center fellowships, she currently lives in Los Angeles.
Learn More About The Book of Life
print
Back to Top