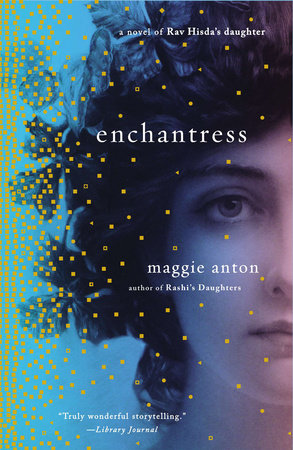 Fantastic tales of demons and the Evil Eye, magical incantations, and powerful attractions abound in Enchantress, a novel that weaves together Talmudic lore, ancient Jewish magic, and a timeless love story set in fourth-century Babylonia.

One of the most powerful practitioner of these mysterious arts is Rav Hisda’s daughter, whose innate awareness allows her to possess the skills men lack. With her husband, Rava–whose arcane knowledge of the secret Torah enables him to create a “man” out of earth and to resurrect another rabbi from death–the two brave an evil sorceress, Ashmedai the Demon King, and even the Angel of Death in their quest to safeguard their people, even while putting their romance at risk.

The author of the acclaimed Rashi’s Daughters series and the award-winning Rav Hisda’s Daughter: Apprentice has conjured literary magic in the land where “abracadabra” originated.  Based on five years of research and populated with characters from the Talmud, Enchantress brings a pivotal era of Jewish and Christian history to life from the perspective of a courageous and passionate woman.

Maggie Anton is a writer and scholar of the Talmud and ancient texts. She lives in Los Angeles.

1. Many of the characters in the novel, including Hisdadukh, are historical figures. What drew you to her story? How much did you know about her before you began writing Rav Hisda’s Daughter: Apprentice and Enchantress?

The Talmud passage where her father calls up Rami and Rava, asks her who she wanted to marry, and she replies “Both of them” astounded me, especially since that is what eventually happened. I had to know more about her. When I started my research, I knew very little about her, or the Babylonian rabbinic community. I knew Rav Hisda was a wealthy brewer, that he was one of the rabbis creating the Talmud in the 3rd-4th centuries, and that Babylonia was the same place as modern Iraq.

2. Stories of ancient Jewish magic and teachings from the Talmud are threaded throughout the novel. What challenges did you face in creating an atmosphere grounded in historical fact but also infused with the supernatural?

In my Rashi’s Daughters trilogy, which takes place in medieval France, characters accept that illness came from foul air or bad food, but might also be the result of demon attacks or divine punishment. Precautions against these include actions we would call superstitions, such as wearing amulets or avoiding certain activities on “unlucky” days. I detailed many of these “magical” practices, but left it up to the reader whether they actually worked. I wrote Apprentice and Enchantress from the heroine’s first person POV, which meant that I, the purported author, believed just like everyone else that misfortunes such as disease, miscarriage and premature death were caused by demons, sorcerers’ curses, and the Evil Eye. She/I also believed that these problems could be cured or prevented by spells inscribed by skilled healers on amulets and incantation bowls. In Apprentice, my heroine trains to become one of these healers. Though the techniques she learns would certainly be considered magic today, I tried to stay on the historical fiction side rather than cross into fantasy. My heroine sensed, not saw, the angels who made her incantations work. With Enchantress, rather than pussyfooting at the border, I charged fully into fantasy. My hero consults with ghosts, creates a golem, and resurrects another rabbi – all as described in the Talmud. My heroine conjures Ashmedai the Demon King, uses a magic ring to speak with animals, and creates food from nothing – again, magic described in the Talmud. I knew this might take Enchantress out of my readers’ comfort zone for historical figures, but I couldn’t leave out their supernatural actions and be true to their story.

3. You write in the afterword that you hope this novel will inspire readers to learn from the Talmud text itself. How important is it to you that your writing opens new doors for your readers, and pushes them to learn more? Is that something you think about regularly while you’re working on a novel?

It is important to me, but not something I consciously think about when I’m writing. I hope that what they learn while reading my novels will whet their appetites to study more.

Beside a Burning Sea
Back to Top