No One Could Have Guessed the Weather Reader’s Guide 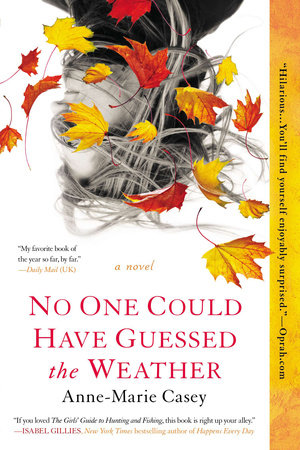 No One Could Have Guessed the Weather Reader’s Guide

print
No One Could Have Guessed the Weather Reader’s Guide

After her husband loses his job, Lucy has to leave behind her posh life in London and settle into a tiny East Village apartment. Now she’s a middle-aged mother in the midst of hipsters, homesick and resentful until she embarks on a new love affair—with New York City and three new friends.
Julia has left her family for a mini breakdown and a room of her own. Trophy wife Christy is a bit adrift, as only those who live in penthouses can be. Robyn is constantly compensating for her wunderkind husband who can’t seem to make the transition to adulthood. And all of them are starting to learn that what you want in your twenties isn’t always what you need in your forties…
ABOUT ANNE-MARIE CASEY

Anne-Marie Casey was a script editor and producer of prime-time television drama. No One Could Have Guessed the Weather, her first book, was inspired by her time living in Manhattan and her love-love relationship with the city. She is married to the novelist Joseph O’Connor. They live in Dublin with their two sons.


Learn More About No One Could Have Guessed the Weather
print

So Near
Liza Gyllenhaal

All the Truth
Laura Brodie

The Hole in the Middle
Kate Hilton

Without a Backward Glance
Kate Veitch

Women on the Verge of a Nervous Breakthrough
Ruth Pennebaker