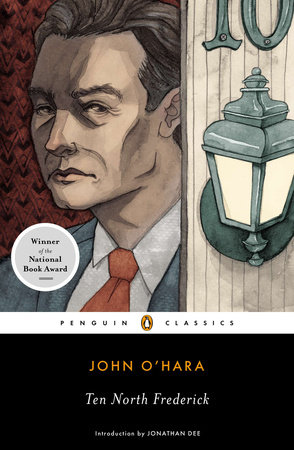 “A married couple always presents an absurdly untruthful picture to the world, but it is a picture that the world finds convenient and a comfort.” (p. 134)

This modest but explosive dictum appears in the middle of the sequence that recounts the marriage of Ben and Charlotte Chapin, parents of the protagonist of John O’Hara’s novel. It could have served as the novel’s epigraph since it accurately characterizes most of the marital unions in Ten North Frederick. In this particular instance, Charlotte and Ben’s marriage may appear to those in their social circle as a model of happiness. However, we learn that Charlotte, after her second stillborn pregnancy, denies her husband sexual affection, and that he in turn goes to the local whorehouse or the arms of a hotel chambermaid. Charlotte’s own sexual impulses, we are led to believe, are not dead just misdirected. In one incident, she coyly decides to walk downtown rather than to take a carriage, the proper means of conveyance for a woman of her station at the turn of the twentieth century. Outside a saloon a drunken man rudely accosts her with sexually explicit language and before the situation can escalate into a scandal she is rescued by her coachman Connelly. The narrator concludes: “The uncaring whores and the chambermaid [he could have added the Irish servants] were the only ones who had been given an inside look. The rest of the world saw a happy couple, a long-established happy couple who might even be asked for recipes and formulas for the creation of a happy marriage” (135).

This dismal domestic dynamic repeats itself throughout the novel. What appears to be a blissful union of two loving individuals is only a cover for the trapped existence of two emotionally and sexually incompatible adults. When something, usually of a sexual nature, threatens to mar this picture of family bliss, a person from the lower social strata—usually Irish and Catholic—is called upon to mop up the mess. A generation later, Ben and Charlotte’s son Joe uses the Irish power-broker Mike Slattery as a fixer. When Joe’s daughter Ann indulges in promiscuous behavior in the back of a butcher’s van, Slattery is phoned and the delivery boy summarily driven out of town. Slattery’s services are more urgently needed later when Ann scandalously elopes with a jazz piano player named Charley Bongiorno. Before Gibbsville even notices Ann’s disappearance, Slattery arranges for a secret abortion of their child and an annulment of the marriage. He even manages to expunge the marriage from all public records. Thus, the picture of Chapin family happiness is restored.

The family picture may be one of happiness but the internal lives of the main characters are desperately sad and lonely. Joe, early in his marriage, confides to his friend Arthur, “it’s awful how much of our lives we spend just waiting, isn’t it?” (114). This is not the typical sentiment of a newlywed about to embark on fatherhood. The children, who are often the pawns between two warring spouses, suffer even worse fates. This explains the impulsiveness of Ann, Joe and Edith’s daughter, and the aimlessness of her brother Joby. To return to Charlotte and Ben, their mutual hostility grows as their son gets older. Charlotte, we are told, “destroyed any love between the boy and his father. The father was made to seem just short of a fool; the son was made to seem just short of sacred” (144). Ben experiences some retribution later when he witnesses the birth of his granddaughter, a potential rival to Charlotte for Ben’s attentions. “You ran his life,” Joe confronts his wife. “You got the affection and respect. But watching you lose it to a tiny girl, an infant, that’s going to be some satisfaction to me” (184). Although Ben’s outburst is partly motivated by a desire to see his son break his unhealthy attachment to his mother and to “be the man I wish I’d been and didn’t turn out to be” (192), it also expresses a wish to use his son and granddaughter as instruments of revenge.

These dysfunctional dynamics, alas, are repeated in Joe and Edith’s marriage. Their sex life appears to end after he breaks his leg, even though he is still an active man in his forties. Edith, on the other hand, has a single dalliance with Gibbsville’s notorious womanizer Lloyd Williams. The cause was not lust or longing but revenge for Joe leaving her alone in Philadelphia, which to her was an expression of “his docile refusal to let her guide his life” (263). Joe redirects his passions towards a political career. After his hopes for the Republican nomination for Lieutenant Governor end in “spontaneous combustion” (376), Joe is left a shell of a man, now in his fifties. Joe and Edith share a moment of honesty when they confess their respective infidelities to each other but nothing at this point can bring them closer together. Joe’s final alcoholic years, enabled or even accelerated by Edith, constitute the grim conclusion to their marriage and to the novel.

Ten North Frederick presents a bleak picture of adult love. Yet O’Hara’s universe permits the possibility of meaningful intimacy, however rare and brief it may be. Before Joe’s descent into alcoholism he experiences an intense passion for Ann’s New York roommate Kate. Never before has he felt so “surely, and deeply, and completely, and happily” in love (409). Kate reciprocates his love but convinces him it would be impossible to continue the affair given their differences in age. Rather, they should separate and he should forever think of their one night together “as a separate part of your life” (411). Before the affair can even blossom it is over, taking up just a fraction of the narrative of Joe’s life. Similarly, Ann’s one chance at love, her marriage with Charley Bongiorno, is abruptly cut short; the episode fills up a mere paragraph. She later tastes the dissatisfactions of an unhappy marriage to another man but unlike her father she divorces her husband since “incompatibility had led him to other women and her to other men” (426). Joe is nourished but also haunted by the memory of Kate much like Ann is by Charley’s memory whenever she hears his song “Sweet and Lovely.” Late in the novel, Ann, who feigns ignorance of her father’s affair with her one-time roommate, informs him that Kate is married but still in love with someone else. Joe’s response— “Well, of course life is full of inconsistencies” (428)—is a tragic summary of the many long, unhappy marriages and the few brief unions of love in Ten North Frederick.
ABOUT JOHN O’HARA

John O’Hara was born in Pottsville, Pennsylvania, in 1905 and died in Princeton, New Jersey, in 1970. His father’s untimely death made it impossible for him to afford to attend Yale University, a disappointment which rankled him for most of his life. He wrote for local newspapers before moving to New York to pursue a career as a fiction writer. There he became a prolific writer of short stories. The New Yorker published 247 of his stories, which is still a record for a single author in the history of the magazine. Many of his stories are set in the coal country town of Gibbsville, Pennsylvania, a fictionalized version of the author’s hometown.

O’Hara’s first critical success was the novel Appointment in Samarra (1934), which portrayed the downfall of a car dealer. The protagonist, Julian English, makes a cameo appearance in Ten North Frederick. He followed that work with BUtterfield 8, a bestselling novel about the relationship between a wild and beautiful young woman and a respectable, married man. Among the other twelve novels he published are Pal Joey (1940), A Rage to Live (1949), Ten North Frederick (1955), and From the Terrace (1958).

Several of O’Hara’s works were adapted for the stage and screen. Elizabeth Taylor won an Academy Award for her portrayal of BUtterfield 8’s heroine in the 1960 film version. That same year O’Hara helped write the screenplay for From the Terrace, a film starring Paul Newman and Joanne Woodward. Gary Cooper played Joe Chapin in the 1958 film Ten North Frederick, which O’Hara helped adapt. The most famous adaptation of an O’Hara work was Pal Joey, which was immediately adapted and released as a musical, with a libretto by O’Hara and songs by Rodgers and Hart. The musical was revived in 1952 and re-adapted in 1957 as a motion picture, starring Frank Sinatra and Rita Hayworth.


Learn More About Ten North Frederick
print
Back to Top