Any Other Name Reader’s Guide 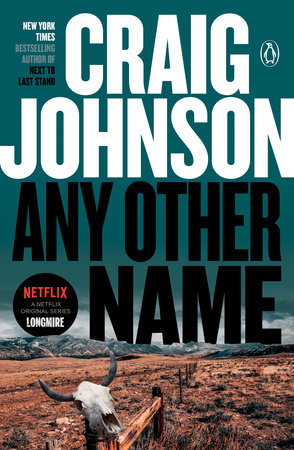 Any Other Name Reader’s Guide

print
Any Other Name Reader’s Guide

“Sheriff Walt Longmire, they talk about you like you’re some inevitable form of justice” (Any Other Name, p. 76).

It’s deep winter, and Walt Longmire’s got no business being in Campbell County. The Sheriff of Absaroka County should be on his way to Philadelphia, where his daughter, Cady, is about to give birth to Walt’s first grandchild. He would be, too, if his old boss, Lucian Connally, hadn’t dragged him over county lines to investigate what looks like an open-and-shut suicide.

According to the autopsy report, Detective Gerald Holman shot himself twice at close range in a locked motel room. The first shot tore open his face and the next blew off the top of his head. His wife, Phyllis, is certain that Gerald would never kill himself and suspects there’s something fishy about his death—something the Campbell County authorities aren’t telling her. Lucian and Phyllis are old friends, but Lucian knows that there are limits to what an old man with one leg can do, so he asks Walt to help.

Sandy Sandburg, the Campbell County Sheriff, explains that Holman was the department’s one-man cold case squad. When Walt looks through Holman’s files, he finds that the detective was last working on a not-so-cold missing persons case. Jone Urrecha was a stripper at Dirty Shirley’s in Arrosa, “a little crossroads east of here along the railroad tracks” (p. 35). Five weeks earlier, Jone went to work and hasn’t been seen since.

Walt is all too aware that a stripper’s disappearance isn’t unusual. But then he learns that two other local women—waitress Roberta Payne and Kmart employee Linda Schaffer—vanished within six months of Jone. Holman’s replacement, Richard Harvey, insists “there’s nothing to connect them other than the fact that they were women and are missing” (p. 37). Still, Walt can’t shake the feeling that something more sinister than coincidence is at work.

Meanwhile, Cady’s obstetrician is concerned about the baby’s position in the womb and wants to schedule an induction. Cady was born “back in the dark ages when they made the father sit on a bench in the hallway” (p. 47), so Walt is both pleased and startled to learn that Cady wants him present in the delivery room. He’s less pleased to hear that Cady’s booked him on a flight to Philadelphia in just four days. Nothing can save Holman now, but Walt hopes the three missing women might still be alive.

With the clock ticking down to his scheduled departure, Walt heads out to Dirty Shirley’s. Besides the strip club, Arrosa—Basque for “rose” —consists of little more than a post office and Sixteen Tons, a bar named during the town’s heyday as a coal-mining hub. From there, the trail leads Walt out to a casino in Deadwood, South Dakota, just as a blizzard threatens to cover the culprits’ tracks for good.

Fortunately, Lucian, Undersheriff Vic Moretti, and Henry Standing Bear have got Walt’s back because an old nemesis has joined the mix of bad guys gunning for the Sheriff in this action-packed addition to Craig Johnson’s bestselling Longmire series.

1. Lucian Connally convinces Walt to investigate Gerald Holman’s death because he feels he is indebted to Phyllis. Was Lucian, in fact, responsible for Phyllis’s accident?

2. Even though they’ve never met, Phyllis calls Jone Urrecha a whore because she worked as a stripper to finance her college education. What does this tell you about Phyllis’s character?

3. As a widower, Walt has experienced his share of grief and loss. How does this inform his work as a law enforcement officer?

4. On their way to the Holman household, Lucian tells Walt, “they used to have bumper stickers over here that read CAMPBELL COUNTY—GIVE US ONE MORE BOOM AND WE WON’T SCREW IT UP” (p. 5). Discuss an instance in which a character’s actions are driven by the country’s current economic downturn.

5. Johnson always packs his novels with interesting facts and statistics. What is one of the most astonishing things you learned from Any Other Name?

6. (Spoiler Warning: Don’t read on if you don’t what to know whodunit!)


Walt is an enlightened spiritualist and a hard-boiled detective put together in one plain spoken, shearling-wrapped package. What aspect of Walt do you find most appealing? In what ways is he uniquely shaped by the traditions of the American West?

7. Both Connie and Thor have troubles stemming from drugs they used to further their aspirations as, respectively, a dancer and football player. Does society put too much pressure on young people involved in sports and other performance-oriented activities?

8. When her role in the crimes becomes clear, Connie tries to kill herself. Should Walt have intervened to save her?

9. The bond between parent and child is a recurring theme in the Longmire novels. Compare Gerald Holman and Connie’s father-daughter relationship to Walt and Cady’s. How are they similar? How far would Walt go to protect Cady?

10. Were you surprised to learn that Tomas Bidart—Walt’s nemesis from A Serpent’s Tooth—is still seeking revenge? Do you think Walt will tell Vic that Bidart is still in the picture?

Craig Johnson is the New York Times bestselling author of the Walt Longmire mystery series, now the hit drama series, Longmire, returning this fall on Netflix. He is the recipient of the Western Writers of America Spur Award for fiction, the Mountains and Plains Booksellers award for fiction, the Nouvel Observateur Prix du Roman Noir, and the Prix 813. He lives in Ucross, Wyoming, population twenty-five.
Learn More About Any Other Name
print
Back to Top