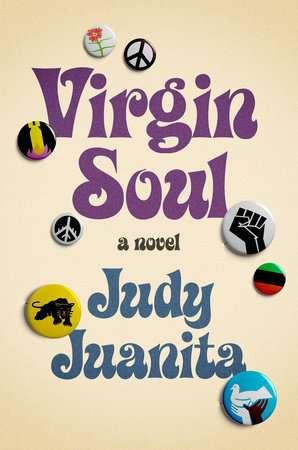 Lauded poet, playwright, and scholar of African American history Judy Juanita delivers a debut novel that brings to life one of the most politically and racially charged eras of American history. Virgin Soul focuses on the college years of Geniece Hightower, known as “Niecy” to the aunts and uncles who raised her. At first glance, Geniece’s story sounds like that of a typical young woman: She goes to college, finds her first boyfriend, loses her virginity, builds meaningful friendships, questions her ideals, and juggles her busy schedule with a part–time job. However, she does all of these things in 1960s San Francisco, while becoming a militant member of the Black Panthers. When Huey Newton is jailed in October 1967 and the Panthers explode nationwide, Geniece enters the organization’s dark and dangerous world of guns, FBI agents, freewheeling sex, police repression, and fatal shootouts—all while struggling to complete her formal education.

Virgin Soul, narrated by Geniece, details the many ways in which her life is forever changed by these experiences. As Geniece tries to shape her own identity—as a woman, as an African American, and as an adult—the world around her is shifting radically; everything seems to be in flux. She begins her college education as a reporter for the school newspaper, and she narrates her story with a trained journalist’s ear for dialogue and gritty details. Through Geniece’s eyes, we witness news of the Vietnam War, Haight Street’s hippies, violent protests by the Black Panthers, and systematized racism in action. This moving novel is a striking depiction of the circumstances that spin a young woman’s life, and an entire nation’s history, out of the typical and into the extraordinary.

Judy Juanita’s poetry and fiction have been published widely, and her plays have been produced in the Bay Area and New York City. A native Californian, she lived for nearly two decades in New Jersey, where she worked as a Poet–in–the–Schools and as a reporter for The Record. She was awarded New Jersey Arts Council Fellowships for poetry and an MFA in creative writing from San Francisco State University. She has taught writing at Laney College in Oakland since 1993. This is her first novel.

A CONVERSATION WITH JUDY JUANITA

Q. How much of your own life experience did you use in this novel?

Q. What writers have influenced your work the most?

Q. You’ve written plays, poems, and now your first novel. When you have an idea for a story that you want to tell, how do you decide which form or genre in which to tell it?

Dialogue racing around in my head points me to narrative in play or fictional form. My father and mother ingrained the habit of newspaper reading in our family. Very often, a news event will become a narrative vision. Also I love gossip and have the soft shoulder that people cry on. My mom said I have a listening ear. What goes in my journal I use, even decades later, in drama or fiction. I see a play scene by scene. By teaching Shakespeare and August Wilson I learned that plays need grounding and a temporal quality, first and foremost. Fiction can delve into the depths of the mind and, with flashbacks (and forward), cover lifetimes and beyond. Poems seem to arise from righteous indignation or profound anguish; my heightened emotions end up in poetry.

Q. How does writing a novel differ from writing a play? Describe your writing process.

I learned to write a play through years of writing ten–minute plays overnight and many ten–week playwriting workshops. However, the novel is not a sprint or even a marathon. It’s the trek up Mt. Everest. My equipment includes rough outlines, notes and research, and the character whose journey to the top makes me her Sherpa. I will give my life for her, since she will ruin it if I try to escape. Obsessed much? That’s why I don’t start a novel unless I commit to finish. I’ll make notes and do research, but once the writing starts, it’s on to the summit.

For the novel I do use the way of writing a scene that I learned in playwriting. I make notes and snatches of dialogue for weeks. I have idea files that are overflowing. When I’m ready to write a scene, I sit down with the outline, my notes, research, and ideas spread over my dining room table, and write, going from note to note. This piecemeal construction requires extensive editing, which I love. Rewriting strikes thematic gold. When I rewrite I feel like I’m hitting the mother lode again and again.

Q. You worked as a reporter for years. In Virgin Soul, Geniece is primarily attracted to journalism, but over the course of the novel decides it is not the career for her. How has your history with journalistic writing informed your own creative writing style?

One of my mentors, the late Robert Maynard, taught us in j–school to end interviews with “Is there anything else you’d like to tell me?” That push to go beyond what’s apparent is what I took from journalism into creative writing. Of course, I love the currents of history and social change that journalists document. But I wanted more. Fiction probes the why.

Q. This novel is rooted in a volatile period of American history. What kind of research did you do while writing this book?

There is a growing and substantial body of nonfiction and poetry on the Black Panther Party, the civil rights movement, the student movement at SFSU, and the sixties. I plumbed that work and used archives at Merritt College, SFSU, the Oakland Public Library, and the Huey P. Newton collection at Stanford University.

Q. What is your approach to writing dialogue? Did your early reporting experience help to tune your ear?

I read my dialogue out loud over and over; if it doesn’t sound right, I’m not comfortable until I change it, sometimes in the middle of the night. Reading literature out loud is unbeatable for understanding the author’s intention, even if the author is the self.

Wanting to hear people talk is key for a good reporter. I had such interesting voluble characters in my family, extended family, friends’ families, and my marital family that they, in effect, trained me to listen to garrulous people. It took years for me to understand that the uncommunicative, the tight–lipped, have as much, often more, to say.

Q. The value of education is a strong theme in Virgin Soul. How has your own education, both academic and experiential, influenced your writing? Did you have any teachers who particularly inspired you?

A great storyteller, my mother, inspired me to treasure stories, whosoever delivers them. My high school journalism teacher, Roland Christensen, taught me well, as did the poets and writers in the Black Arts Movement, Amiri Baraka, Sonia Sanchez, Haki Madhubuti, Marvin X, and Carolyn M. Rodgers. My writing changed for the better once I began teaching English at the college level in 1983. Often I had to read all night long to try to catch up with my students; when I didn’t catch up I learned even more and gave them something from my unique toolbox in exchange.

Q. When did you first realize that you wanted to become a writer?

At eight years old, I was first published in the Aunt Elsie Page of The Oakland Tribune. Getting those first bylines hooked me on getting into print. The desire has never been sated.

Q. It is interesting to watch Geniece struggle with her political views and with her position in the Black Panther Party. To what degree, if any, do her doubts and intellectual struggles mirror your own?

My character and I both got our education in the movement during college. My intellectual education began immediately after graduation when I started teaching and realized how little I knew. I began a program of study that’s lasted all my life. I funneled some of my intellectual inquiry into Geniece’s collegiate journey.

The Book of Peach

How to Fake It in Hollywood

Everything She Thought She Wanted

Memories of a Marriage
Back to Top