The Truth About the Harry Quebert Affair Reader’s Guide 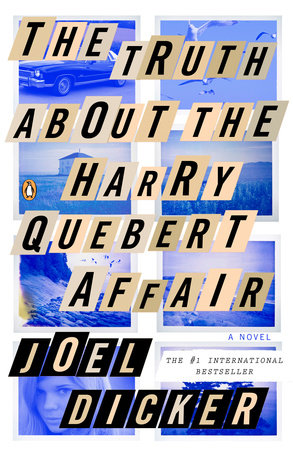 The Truth About the Harry Quebert Affair Reader’s Guide

print
The Truth About the Harry Quebert Affair Reader’s Guide

INTRODUCTION
“Only write fiction. Anything else will just bring you trouble” (p. 161).

Marcus Goldman is riding high. The twenty-eight-year-old writer is “the new darling of American letters” (p. 12), and his debut novel has sold two million copies. But when it comes time to produce a new book, Marcus is sidelined by a crippling case of writer’s block. As he struggles to rediscover his muse, Marcus becomes enmeshed in a mystery of more than three decades that will ultimately threaten both his career and his very life.

Before becoming a big-time New York City writer, Marcus attended Burrows College. It was at Burrows that Marcus first met his writing professor—and his personal hero—Harry Quebert. Thirty years earlier, Harry’s novel The Origin of Evil won a slew of prestigious awards and turned him into an overnight celebrity. The star professor took a liking to Marcus and made him his protégé. In despair and with no one else to turn to, Marcus decides to pay Harry a long-overdue visit in the quiet town of Somerset, New Hampshire.

Harry welcomes Marcus to Goose Cove, his large and lovely seaside home. During his stay, Marcus stumbles upon a passionate correspondence between Harry and a young girl named Nola Kellergan. He also finds old newspaper clippings detailing Nola’s mysterious disappearance in 1975. She was last sighted covered in blood in the woods near Somerset—and never seen again.

In 1975, Harry was in his mid-thirties, and Marcus is shocked by the fact that his adored mentor had been romantically involved with a fifteen-year-old girl. Childless and unmarried, Harry swears Nola was the love of his life, and Marcus promises never to reveal Harry’s secret.

Still unable to write, Marcus returns to New York City, where he grimly awaits his publisher’s deadline. Then the news breaks: Nola’s remains have been found buried at Goose Cove—along with a manuscript copy of The Origin of Evil. The evidence is circumstantial, but Harry is indicted for murder and his affair with an underage girl has been made public.

Marcus again travels to Somerset, this time to support the man who’s always stood by him. The media is having a field day, and even the once adoring townspeople have turned against Harry. Only one person is thrilled with the scandal: Marcus’s publisher, Roy Barnaski. Since Marcus hasn’t delivered another novel, he proposes that his delinquent author instead write a nonfiction account of “The Harry Quebert Affair.” The crime has captured the public’s imagination, and Barnaski believes Marcus’s insider’s account could make millions.

Marcus refuses to exploit Harry’s tragedy, but he can’t help wondering about the fifteen-year-old girl who captured his friend’s heart—and why someone wanted her dead. Much to the chagrin of state and local authorities, one question leads to another, and soon Marcus has undertaken his own investigation.

A blockbuster bestseller in Europe, The Truth About the Harry Quebert Affair brilliantly skewers small-town life, the publishing industry, and our cultural obsession with celebrity and scandal. Filled with more twists and turns than a Hitchcock film, Joël Dicker’s sly and action-packed book-within-a-book firmly establishes the Swiss writer as one of the most dynamic new voices in fiction.

Born in 1985, Joël Dicker first began writing when he was ten years old, founding a nature magazine called Animals’ Gazette. He was named “Switzerland’s youngest editor in chief” by the Tribune de Genève, and the publication won the Cunéo Prize for the Protection of Nature. Later, he attended drama school and earned his law school degree before turning to writing full time. The Truth About the Harry Quebert Affair is his second novel. In Europe, it knocked Dan Brown’s Inferno off the top of the bestseller lists, and rights have been sold in more than thirty countries. Dicker grew up in Geneva, but spent childhood summers in the United States.

A CONVERSATION WITH JOEL DICKER

Q. Your Web site says that you wrote The Truth About the Harry Quebert Affair because you wanted to try your hand at an “American novel.” Did you simply mean “set in America” or something else?

I simply wanted to place a work of fiction in a New England setting, a place I know well.  Very quickly I realized that I was so familiar with the U.S. that I could allow myself to create an American town with American characters.  Actually, this book helped me discover a part of myself: that I could surpass my origins and my writing language and re-create a part of the United States in French.

Q. It’s impossible to read Harry Quebert without thinking of Lolita. How much—if at all—were you conscious of Nabokov’s novel while writing your own?

The Lolita image came to me late.  I was well into writing the book when I decided that Harry’s character would have a relationship with a young girl.  In my head I immediately made the link to Lolita, from which came my reference N-O-L-A, like L-O-L-I-T-A.  However, having read Lolita when I was fifteen, I had an image which was much more naive than the image that hit me straight in the face when I reread the book a few months ago.  I realized that we evolve with books, and that reading Lolita at age twenty-nine is a different experience from reading it at fifteen.

Q. Does either Harry Quebert or The Origin of Evil have a real-life counterpart?

Not at all.  Nothing in the book or in the characters is based on anything real, anything experienced or a true event.  That’s precisely why I like fiction: you can invent everything.

Q. Like you, the novel’s narrator is a young, attractive, and incredibly successful author. Do the parallels between Marcus Goldman and Joël Dicker go any deeper?

No, not at all.  There is a little bit of me in each character.  That’s normal, since I’m the one who created them.  But aside from our common love of running, there is no more Marcus in me than there is Harry, Jenny, Tamara, Robert, or Gahalowood.

Q. Many writers fall victim to what’s called the sophomore slump. You did just the opposite and wrote a second book that was even more successful than your first. Did you—like your characters—experience a long period of writer’s block before you began Harry Quebert? Did you have any inkling that you had written a million-plus-copy bestseller?

No, luckily I’ve never had writer’s block.  Sometimes I have doubts, as there are always lots of questions that arise while a book evolves, but I’ve never had a block.  Doubt is good: it makes us reexamine ourselves and allows our work to progress.  So, no, I never thought this book would be a bestseller, because of my doubts.  In fact, I was wondering who among my friends would accept to read such a long manuscript all the way to the end!

Q. You began your writing career early and founded a nature magazine when you were only ten. But then you went to law school before returning to writing. Why the detour?

Because I also wanted to study, and to get a diploma.  There are no creative writing courses in Switzerland or France, and the humanities department at the university didn’t interest me.  I’ve always liked law.  For me, it wasn’t a detour.  I like variety.

Q. Who are your major literary influences?

I’ve always learned a lot by reading Romain Gary.  And when reading Marguerite Duras, you get the impression that not one word, not one sentence, is out of place. In American literature, I have always loved John Steinbeck.

Q. Do you think that the potential for the kind of evil that killed Nola Kellergan lurks in every small town?

No, it’s not a question of small town or big city.  It’s a question about people.

Q. The novel has an incredibly cinematic feel. How would you feel about it being turned into a movie?

Excited, obviously, because the movie world is very exciting.  But worried at the same time: books are better than movies.  The imagination is free, time is unlimited, and characters take the face you lend them.  Cinema is not free: the film’s length is limited, you have to cut so it fits into two hours, and the characters’ faces are set as the  faces of the actors who play them.

Q. Did you invent Harry’s thirty-one rules for writing or were they handed down to you by someone else? And would you recommend these rules to real-life writers?

I made up those rules.  I would not recommend them, in the sense that they are self-evident: for example, I say that the first chapter has to be attention-grabbing or else you lose your reader.  That seems totally obvious!   Regardless, these rules are related to creative writing theories, which don’t exist in French literature.

I’m working on a new novel.  I prefer not to talk about it, because that’s my fun and my freedom, to be the only one to know for the moment.  I think it’s a pity to talk about the book you’re in the middle of writing: you deprive yourself of a rare and precious moment of freedom.

[Spoiler warning: Don’t read ahead if you don’t want to know too much!]


Learn More About The Truth About the Harry Quebert Affair
print

Sun Storm
Back to Top