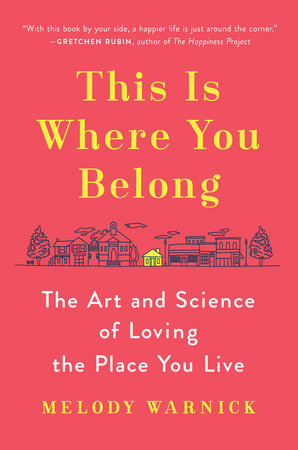 print
This Is Where You Belong Reader’s Guide

1. What place do you consider home? Why? Do you ever think about moving elsewhere? If so, where would you go?

2. In chapter 1, Melody Warnick describes her belief in “the geographic cure,” the idea that a new place will change her life and make her a better, happier person. Do you think there’s any truth to the geographic cure? Why or why not?

3. Although some research shows that children who relocate a lot struggle with relationships and life satisfaction as adults, in other ways, highly mobile children do just fine. In what ways has your moving history as a child influenced the person you’ve become as an adult? Did moving or staying put help or hurt you?

4. What are the differences between being mobile, stuck, and rooted? What makes someone like Gertie Moore seem more rooted than stuck? In which category would you put yourself?

5. How well your town makes you happy is in part a product of person-environment fit. For instance, Warnick’s friend Amber has such a good person-environment fit with Austin, Texas, that “if Austin were a guy, you would set Amber up with him on a blind date.” Who would you set up on a date with your current town? Why?

6. One of the Love Your City Checklist suggestions in chapter 2 is to “follow the ‘1-Mile Solution’” by replacing one car trip per week with a biking or walking errand instead. Why are walking and biking so popular right now? If you lived close enough to walk or bike to the supermarket or another important local spot, how would it change your experience of your city?

7. Warnick tells the story of Jay Leeson, a transplant to Wilmore, Kentucky, who organized a campaign to keep Leonard Fitch’s grocery store from going out of business. Leeson calls this neighborly economics. Do we have a moral responsibility to support local businesses, even if they’re more expensive? Or should market forces determine which businesses survive?

8. A Pew Research Center study found that people who live within an hour’s drive of at least six family members are the least likely to move. Would living close to your extended family make you happier? Or like Warnick, do you consider distance from family a “get-out-of-jail free” card?

9. Almost a third of Americans don’t know any of their neighbors by name, and yet many studies show the value of neighborhood relationships, including the fact that when you are friends with your neighbors, you’re 67 percent less likely to have a heart attack and 48 percent less likely to have a stroke. Why are Americans less neighborly than they used to be? Do you wish you knew your neighbors better, or are you happier being left alone?

10. According to the Knight Soul of the Community study, the three factors that are most influential in creating place attachment are social offerings, aesthetics, and openness. Did anything about this list surprise you? Which of these three elements is most important for you? What’s missing from the list that’s helped you feel attached to where you live?

11. In chapter 7, Warnick introduces Brian Mogren and Don Samuels, who chose to move to troubled neighborhoods in Minneapolis. Do you think this approach can genuinely change a place? What factors do you normally consider when you’re deciding where to live? Would you ever make a similar choice to move somewhere because you hoped to improve it?

12. Does being aware of your city’s problems make you love it less? Would volunteering with your city’s homeless community, for instance, make you feel more attached, or simply more worried about the future of your city?

13. Warnick cites several reasons why people gravitate toward certain landscapes, from childhood history to evolutionary biology. What kind of landscapes draws you? Why? Can you find some element of that landscape where you live?

14. If you moved away from your town tomorrow, what restaurant meal or local food would you miss the most? Why do sense memories of the tastes, smells, and sounds of places you’ve lived or visited seem to last longer than other kinds of memories?

15. How does personality affect our ability to become place attached? For example, do you think it’s easier for extraverts than for introverts? What about people who rate highly on openness or agreeability?

16. Among the book’s Love Where You Live principles is this: If you love your city, you should do what’s good for it. Is there something you could contribute to your city to make it a better place to live? How do you think organizing a placemaking project or running for local office might change the way you feel about where you live?

17. How attached are you to the place where you live now? Which statements from the place attachment scale in chapter 1 do you agree with most strongly? Which do you disagree with?

18. What Love Where You Live experiment would you be willing to try where you live now?

Learn More About This Is Where You Belong
print

The Emotional Life of Your Brain
Richard J. Davidson

The Imp of the Mind
Lee Baer

What Shamu Taught Me About Life, Love, and Marriage
Amy Sutherland

If You Meet the Buddha on the Road, Kill Him
Sheldon Kopp

Things Are What You Make of Them
Adam J. Kurtz

A Thousand Names for Joy
Stephen Mitchell and Byron Katie

The Stuff of Thought
Steven Pinker

Essential Writing Skills for College and Beyond
Charlene Gill and C.M. Gill

I AM
Howard Falco

The Uses of Enchantment
Bruno Bettelheim

When Food Is Love
Geneen Roth
Back to Top