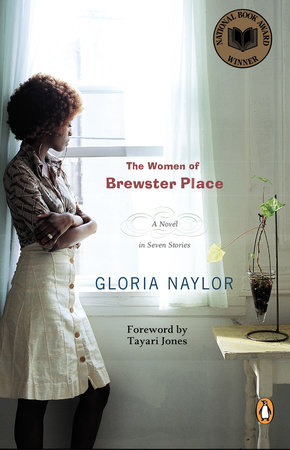 INTRODUCTION
“Gloria just gets smoother and better, doesn’t she? The Men of Brewster Place is sort of like a clear, cool mountain stream; too cold to wade in; too swift to dare take a drink from; yet clear and inviting nonetheless: sort of like black men. ‘Difficult and dangerous; delicate and deep,’ in the words of James Baldwin. Maybe more like a winter day with that clear blue sky and though the sun is shining we know we need protection before going out. A natural precaution that in no way spoils the adventure; that, indeed, allows us to interact with varying phenomena. I’m so glad to know what happened to Basil and why he didn’t return. Ben needed to tell his story. C. C. Baker has reason for rage albeit misplaced. The men are standing on the mountain top looking over into the valley. They, too, have dreams that are being deferred, no, destroyed. Gloria was very brave to once again follow this trail into the uncharted territory of the heart.” ?Nikki Giovanni

“Two or three things I know for sure: and one of them is that telling the story all the way through is an act of love.”
?Dorothy Allison

Fifteen years ago I wrote The Women of Brewster Place and whenever I traveled and spoke publicly about the book, I inevitably got the question, “Where are the men?” This always struck me as curious since I thought the title of the novel was self-evident. But what people were really asking was, where is the rest of the story? Or should I say, the other side of the story. It has taken me these many years to decide finally that I wanted to give the men who had appeared briefly in The Women a voice of their own. Like many in this country I was profoundly moved by the Million Man March and the images of all those black men calling themselves to task, promising to return home and be better citizens by concentrating on being better fathers and brothers. The march provided an alternative to the popular media image of the troubled black man. In The Men of Brewster Place, the women are still present, but they take a back seat as I look at these men in all their complexity, and in their relationships to their families, their community. But above all, I wrote The Men of Brewster Place as a testament to the hidden majority, men like my father who worked hard all of their lives, who struggled to keep their homes together against incredible odds and who remained even after their deaths unsung, unknown.

Gloria Naylor was born in 1950 in New York City. Her father, Roosevelt Naylor, a transit worker, and her mother, Alberta Naylor, a telephone operator, immigrated north from rural Mississippi the year before Gloria’s birth. From an early age Gloria was an avid reader, a passion she inherited from her mother, who used to go to great lengths to buy books she could not otherwise get from the Mississippi libraries because blacks were not allowed inside. Gloria was a shy and introverted child, but she found expression in a diary she kept as a young girl. This affinity for the written word continued throughout high school, where she was introduced to the English classics and where her own writing earned her praise and high marks from her teachers.

The year Gloria graduated from high school, the Reverend Dr. Martin Luther King, Jr. was assassinated. The shock of this event compelled Gloria to postpone college. She chose instead to become a Jehovah’s Witness missionary, and for the next seven years she traveled the country evangelizing. At age twenty-five she abandoned this effort and resumed her education, enrolling at Brooklyn College. There she experienced an awakening of sorts, realizing for the first time the importance of her identity as both a woman and a black American. She was introduced to some of the great black women writers, and this fueled her passion to produce her own work.

Naylor’s early attempts at writing were hugely successful. One of her first short stories was published in Essence magazine, and soon after she negotiated a book contract. Published in 1982, that novel, The Women of Brewster Place, was an immediate success, earning her great critical praise as well as the National Book Award for the year’s best first novel. From there, Naylor went on to publish Linden Hills (1985), Mama Day (1987), and Bailey’s Cafe (1992). Each of these novels garnered much attention for their exploration of the modern black American experience.

In addition to her novels, Naylor has written essays and screenplays, as well as the stage adaptation of Bailey’s Cafe. The Women of Brewster Place was made into a television movie starring Oprah Winfrey, who is an ardent fan of the novel and the writer. Naylor herself is the founder of One Way Productions, an independent film company, and is also involved in a literacy program in the Bronx. She is the recipient of numerous awards, including fellowships from both the NEA and the Guggenheim Foundation, and frequently serves as a lecturer and visiting professor at universities across the country.

A CONVERSATION WITH GLORIA NAYLOR
You mention that you wrote The Men of Brewster Place as a response to the many readers who wondered about these characters. How much had you already developed their personalities and situations when you introduced them in The Women of Brewster Place, and how did they evolve as you were writing this book?

When I was writing The Women of Brewster Place I had not developed these male characters beyond playing the roles of antagonists for the women who were my central concern. At that time the men were used as dramatic devices to bring conflict, of some sort, into the lives of the women. In The Men of Brewster Place they developed as characters in the same way that all characters evolve: I start with a few basic facts and watch the characters gain a life of their own with surprising twists and turns for me as well as for the reader.

Many of the men’s stories took surprising turns: Eugene’s homosexuality; Moreland T. Woods’s betrayal of the community; Basil’s attempt to make amends with his deceased mother. To what extent were these developments a product of social changes?or changes in your own life?that occurred in the fifteen years spanning the two novels?

As you grow older hopefully you mature and gain insight about yourself as well as the world at large. But I believe that the major twists and turns in the situation of these men come from the characters themselves. I like to let my characters breathe and develop on their own as much as possible. Of course, what they develop into and what they see depends upon my own growth as a human being since I am the filter for their lives.

In the fifteen years since you published The Women of Brewster Place how has your outlook on the role and condition of America’s black man changed?

I now see that black men are in a dangerous situation in this country. While two-thirds of them are managing their lives as best they can and are providing for themselves and their families, there is that one-third who have succumbed to the pressures and don’t see any hope for themselves. This is the one-third that helps to make up the prison population and the under-employed or unemployable.

Unlike men, all women have a history of repression in this country. Is there a similar experience shared by America’s black and white men, or are the men of the two races fundamentally different?

I believe that the two races are not only fundamentally different but irrevocably different because race determines everything in America. And while black women have had to battle both sexism and racism, the black man is seen as more of a threat than the black woman because of his race and gender. So while a few men have managed to excel in this country the majority find themselves having to overcome stereotypes and negative images.

The Men of Brewster Place is about both race and gender because you cannot separate the two when dealing with the black community or any community’s experience. I wrote about a cross section of black men?some who were powerful like Moreland T. Woods, and on the other end of the spectrum some who were powerless like C. C. Baker.

By this time in my career I have no trouble writing from the male point of view because I have been doing that from my second novel?Linden Hills?on to this one. While the new book is my first attempt to write a novel totally from a male perspective, I have had over ten years of experience with other male characters who played major roles in all my novels except for The Women of Brewster Place.

Although both novels conclude with the destruction of Brewster Place, The Women ends on a note of despair, while The Men ends with a definite sense of hope. How would you account for this difference in outlook?

I don’t see The Women of Brewster Place ending on a note of despair. The spirit of the street is still there even though the physical place is now deserted. So both novels end on a note?however small?of survival. This is because I believe that no matter how bad things might get, if there is still life within our bodies then there is hope.

The Women of Brewster Place was your first published novel. How have you changed as a writer since then? Do you think your role as a writer is different?

I still see my role as a writer to be a guardian of the lives that were entrusted to me. I am still obligated to tell the best story that I know how.

Pertaining to The Men of Brewster Place


Pertaining to both novels:

Learn More About The Women of Brewster Place
print

The Penguin Book of Migration Literature

The Life and Times of the Thunderbolt Kid
Bill Bryson

In God We Trust
Jean Shepherd

The Meaning of Matthew
Judy Shepard

Wow, No Thank You.
Samantha Irby

Year of the Monkey
Patti Smith

Everything Inside
Edwidge Danticat