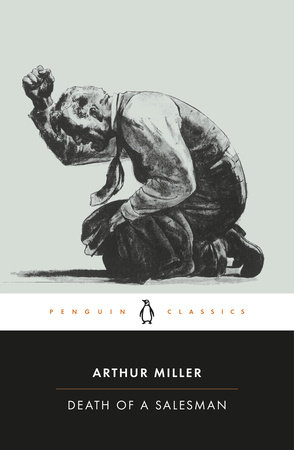 INTRODUCTION
Willy Loman, the central figure in Arthur Miller’s Death of a Salesman, occupies a position to which few characters in literature ascend. Willy serves as a point of reference in contexts outside of literature—invoked to describe anyone who is crushed by the immense forces of American capitalism. This habit suggests a certainty about the play’s meaning that often forms around a widely acknowledged masterpiece despite its multitude of ambiguities. Death of a Salesman vividly portrays the destructive power of certain American tendencies, such as equating wealth with virtue and possessions with self-worth. But the extent of the play’s ambition can quickly obscure the fact that it is also a story about one family and its individual members, culminating in the father’s suicide.

What brings Willy Loman to this point cannot be reduced to the malignant influence of the society in which he lives, although an economic system determined by abstract principles rather than human needs is in part responsible for Willy’s fate. As he says to Howard, his boss, “a man is not a piece of fruit!” (pp. 61-62), but to Howard and the world he represents, the bottom line always comes first. Willy’s history with the Wagner Company and Howard’s father cannot keep Howard from firing Willy. All Howard can say to Willy is “business is business” (p. 60). Believing that his family will benefit more from his life insurance policy than from his continuing to live, Willy seems to accept the implication underlying Howard’s statement—that the value of a person can be quantified according to actual wealth or earning potential. As he says to Charley, “you end up worth more dead than alive” (p. 76).

To argue, however, that Willy kills himself primarily because he realizes the true nature of his world neglects the all-consuming power of his illusions, which retain their hold on him to the end. He is seduced by an American dream that is corrupted; he spends his life working to pay for a house, a car, and a refrigerator, without suspecting that it’s a game he cannot win. Even though Willy finally seems to understand the absurdity of owning something only when it is no longer of any use to him, he maintains his belief in the worth and worthiness of being well liked, as if the game were about something more than numbers. But what makes Death of a Salesman more than an indictment of a system and gives Willy a truly tragic dimension is the intimation that Willy suffers not just from the inhumanity of free enterprise, but also from his inability to reconcile the hopes he had for his life with the one he has actually lived.

As Miller excavates the various layers of Willy’s life, we become aware of the hollowness of his dreams and the extent to which his illusions protect him from being overwhelmed by guilt and regret. He constantly laments his decision not to go with his brother, Ben, to Alaska, where he believes he would have had the kind of life he longs for throughout the play—away from the confinement of the city, having a more direct relationship with the natural world, and being spiritually invigorated by the tangibility of his work’s rewards. At the same time, he continues to profess his faith in the honor of his profession. Is Ben’s life a credible alternative to the one Willy lives, or does Willy’s memory give it the shape of another kind of American dream—the solitary man reaping the bounty of a vast virgin wilderness—that is in fact as devoid of reality as the one Willy buys into? Just as Willy refuses to acknowledge the consequences of his not going with Ben, so he refuses to accept the consequences of his affair with the woman in Boston. If Willy sees Biff as he truly is—as Biff himself finally does—Willy will have to admit to himself that Biff’s discovery of the affair might have undermined the inflated self-image Willy encouraged in him. “I won’t take the rap for this, you hear?” (p. 103), Willy says to Biff, even as Biff insists that he does not blame his father for his own failures. Willy’s needless protest might suggest an unwillingness to accept responsibility for Biff’s mistakes or for his own.

Perhaps it is the illusion of a continuous present—the essential condition of childhood—that Willy finally cannot live without. Unable to bear the disparity between his dreams and the life he has wrought through his decisions and actions, Willy lives almost entirely within his imagination, where disappointment and loss are impossible because nothing is irrevocable. When Willy reprimands Charley for not sharing his sense of gravity before Biff’s championship high school football game, Charley asks, “Willy, when are you going to grow up?” (p. 68). This may be the deepest insight into Willy’s character the play offers. But what kind of model of adulthood is Charley himself? When Willy points out that Charley never took an interest in his son, Bernard, Charley responds, “My salvation is that I never took any interest in anything” (p. 74). Without desire, there is no reason to fear disappointment. The play leaves us to wonder whether it is possible to inhabit a middle ground between Willy’s inability to release his dreams and Charley’s practiced detachment.

Lingering at the end of the play is the question of how much Willy’s childishness is due to a culture that might be said to encourage it, and how much is due to his character and personal circumstances. As his wife, Linda, stands over his grave repeating, “We’re free” (p. 112), her words become more enigmatic the more deeply we consider them. The family is free from financial stress, at least for now, thanks to Willy’s insurance policy. But they are also free of Willy, and perhaps more aware of the harm he caused them. Broadly understood, Linda’s proclamation prompts us to wonder about the nature of freedom. Is the kind of freedom Willy seems to long for possible, or is it necessarily at odds with the maintenance of a coherent society? Even in the freest society, old age is not as free as youth—this may be the more tragic fact to which Willy cannot reconcile himself.

Arthur Miller was born in 1915 in New York City. He held several jobs after high school, including a position as a clerk in an automobile parts warehouse, before he could afford to attend the University of Michigan, where he began writing plays. Returning to New York after graduation, Miller wrote a number of plays for radio. His first play produced on Broadway, The Man Who Had All the Luck (1944), closed after only a few performances but received the Theater Guild National Award. All My Sons premiered in 1947 and won several awards, among them the New York Drama Critics Circle Award.

With Death of a Salesman (1949), winner of the Pulitzer Prize, Miller entered the first rank of American dramatists. In response to McCarthyism and the practices of the House Un-American Activities Committee (HUAC), Miller wrote The Crucible (1953), depicting the Salem witch trials of 1692. Miller was later subpoenaed by HUAC and convicted of contempt of Congress when he refused to identify writers sympathetic to communism; the United States Court of Appeals overturned the conviction.

Miller is also the author of Focus (1945), a novel; The Misfits (1961), a screenplay for his second wife, Marilyn Monroe; andTimebends: A Life (1987), an autobiography. His books of reportage with photographs by Inge Morath, his third wife, includeIn Russia (1969) and Chinese Encounters (1979). Among Miller’s other plays are A View from the Bridge (1955), After the Fall(1964), The Price (1968), The Ride Down Mount Morgan (1991), Broken Glass (1994), and Resurrection Blues (2002). Miller has won seven Tony Awards, an Olivier Award, an Obie Award, the John F. Kennedy Lifetime Achievement Award, the National Book Award 2001 Medal for Distinguished Contribution to American Letters, and the Jerusalem Award.

Saul Bellow, Seize the Day (1956)
Tracing the calamitous events of a single day in the life of its central character, this novella explores the conflicts between the imperatives of free enterprise and the desire for an emotionally authentic life.

F. Scott Fitzgerald, The Great Gatsby (1925)
This classic novel is the consummate depiction of the American belief in the possibility of self-invention and its tragic potential.

Grace Paley, “The Floating Truth” (in The Little Disturbances of Man) (1959)
This story chronicles the humorous, disconcerting experience of an idealistic young woman trying to get her foot in the door of the business world.

Richard Yates, Revolutionary Road (1961)
Frank and April Wheeler, trapped in the deadness and banality of their suburban lives, concoct an absurdly optimistic plan of escape in this dark, insightful novel about American ideals and the disillusion they breed.

Learn More About Death of a Salesman
print

The Short Novels of John Steinbeck

Welcome to the Monkey House

The Age of Innocence
Back to Top