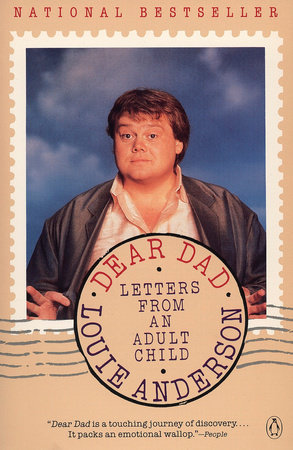 Letters from an Adult Child

Comedian Louie Anderson grew up in a household held hostage by the unpredictable and violent behavior of an alcoholic father. In letters that are poignant and often angry, yet touched with the humor that characterizes his monologues, Dear Dad chronicles Anderson’s hard journey from shame and fear to understanding.

Anderson’s many appearances on The Tonight Show, his specials on HBO and Showtime, and his concerts across the country have won him wide acclaim. But when he found that, despite his considerable success as a comic, he felt no relief from his pain, Anderson entered therapy and joined an Adult Children of Alcoholics group. Only then was he able to break a lifelong pattern of denial.

Includes an introduction by Anderson and a selection of letters from Dear Dad readers about their own experiences.

“Compelling, tender, funny, and well-written. . . . I respect Louie’s courage for talking so openly. Writing the book may have helped the writer in his healing process, but it will also assist readers in theirs.”—Melody Beattie, author of Codependent No More

Louie Anderson is a much-loved stand-up comedian and actor. He is a three-time Emmy Award winner and has been named “One of 100 Greatest Stand-Up Comedians of All Time” by Comedy Central. His bestselling books include Dear Dad: Letters from an… More about Louie Anderson