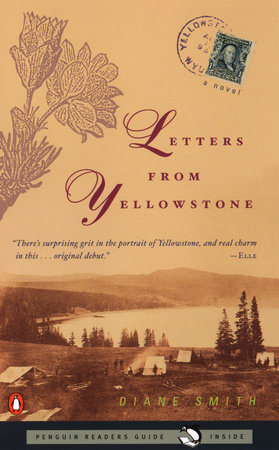 It is the spring of 1898, and Cornell medical student Alexandria Bartram is on her way to the wilds of Montana to pursue her life’s passion—botany. Bright and independent-minded, Alex has found that despite her family’s hopes for her medical career, she is more interested in plants than in patients. The previous March, she heard about a Smithsonian-sponsored summer field study in Yellowstone National Park and immediately wrote to the trip organizer, Professor Howard Merriam. He accepted her proposal, and Alex anticipates an edifying summer.

What Alex doesn’t know is that Merriam’s expedition is riddled with problems. “I have put together the barest bones of an expedition,” the professor writes to a friend. There is little project funding, still less support from the president of Merriam’s college, and two key members of the field party have bailed out at the last minute. The professor, a quiet intellectual who readily admits to weak “people skills” (“I barely get along with my colleagues, let alone understand their true natures,” he writes to his mother), is now faced with a small, makeshift field party that consists of an eccentric entomologist, an alcoholic agriculturist, two student interns, and a driver with an attitude problem. On top of all this, Merriam thinks that his Cornell medical student, whom he has never met, and who signs her letters “A. E. Bartram,” is a man.

These profound misperceptions form the basis of Diane Smith’s unique and warmhearted novel about naturalists and nature at the turn of the century. The story is told entirely through correspondence—an unusual style for a late-twentieth-century novel, but a common one in the nineteenth century, when letters and the telegraph were the most vital forms of personal communication. Smith’s elegantly crafted writing bestows each character with a distinctive voice, and through a wide variety of interactions—from Alex and Merriam’s debates over scientific methods to Rutherford’s determined attempts to teach his pet raven to talk—readers gain insight into the novel’s many disparate characters. In their letters to friends, family, and colleagues, Alex, Merriam, and the others describe events from contrasting perspectives, a kaleidoscopic effect that unites the fragments of multiple viewpoints into a multifaceted whole.

The relationship between parts and the whole is crucial to the development of the novel, which begins with a group of strong-minded strangers—each with his or her own separate purpose—who are forced into a partnership that proves more fruitful than any of their personal goals. As the field study progresses through the summer, botanical discoveries, snowstorms, sabotage, and a pivotal Fourth of July celebration are among the many events that compel the group members to cooperate and eventually lose their preconceived ideas about each other.

Throughout the novel, the characters’ letters touch on pressing issues of the era, many of which are still with us today, from conservation to Native American displacement to feminism. The story is also a coming-of-age novel, not only for Alex, but for Merriam and the others as well, as they confront their fears and conquer them or, in a few tragic cases, are conquered by them. Brimming with humor, excitement, and the romance of the Yellowstone landscape, Smith’s enlightening novel shimmers with discoveries—both human and scientific—that beckon the dawn of a new century.

Diane Smith has lived most of her adult life and a few years of her childhood in Montana, with only brief interruptions to live in San Francisco and London. She studied western and environmental history at the University of Montana, and now specializes in science writing, with an emphasis on public understanding of science and the reform of science education. She also does some travel writing, which often integrates her interests in history and the environment. In her free time, she visits the national parks, volunteers on archaeological and paleontological digs, explores the back roads of Montana, and tries to learn all she can about the natural history of the West.

A CONVERSATION WITH DIANE SMITH

What made you decide to write your novel completely in the form of correspondence? What were the challenges and rewards of writing in this format? Would you do it again?

I originally opened Letters from Yellowstone with a traditional narrative, following Professor Merriam as he prepares for the expedition and ending the first chapter with the arrival of the letter from Miss Bartram. However, once I wrote that letter, it was clear that the book was coming to life in a way that the preceding 50 or so pages simply had failed to do. I was also interested in investigating the characters’ various perspectives on the science of nature—and the nature of science. The letter format allowed the characters to express his or her point of view—as well as their consternation with the beliefs of their colleagues. And yes, I am integrating some letters into my next novel, but since Professor Merriam and his party have been invited back, I hope to revisit the Park with them again sometime in the future. I assume if I write such a book it would once again be told entirely in the form of letters.

I have to respectfully disagree that communicating electronically is the same as corresponding by mail. Although writing down your thoughts and beliefs and experiences can be revealing to oneself and to others regardless of the medium, I view electronic mail simply as a fast and convenient way to transfer information and data asynchronously. I am a regular user, preferring it to the telephone in most cases because it is so nonintrusive and efficient for getting things done. But electronic mail is not what I would call a reflective medium. We’ve become so conditioned to having information on demand that, I believe, many of us have lost the simple joy of anticipating the arrival of a letter, and the leisure to consider our reply. And yes, for the last year, I have benefited from such an antiquated correspondence, which I have found to be immensely rewarding. I feel fortunate indeed to have a friend who is even more atavistic than I am when it comes to letter writing.

How did your background in science and the environment help inform your approach to the novel?

Certainly the characters in Letters from Yellowstone reflect many of the experiences I have had working in science and engineering, although the specifics of the novel are entirely imagined. My interaction with scientists and mathematicians also provided me with the confidence to teach myself new disciplines, and to open my eyes to the natural world in much the way the characters in the book open themselves to Yellowstone National Park and its environs. I think it’s important to point out that I have no training as a scientist. I believe all of us can, and should, develop a very basic understanding and appreciation of science and mathematics. At their heart, both are exquisitely simple and elegant if you can get past the scientific jargon. On the other hand, in the natural world in particular, botanical and other scientific nomenclature can help enrich our understanding. So I agree in general with the statement widely attributed to Linnaeus (although apparently first written by Isidore of Seville) that who knoweth not the names, knoweth not the subject. I guess in the end, I’m sympathetic with both Professor Merriam’s and Miss Bartram’s points of view.

The novel touches on many late-nineteenth-century political and cultural concerns such as the growth of the railroad, conservation concerns, and Native American issues. How did you research these issues?

I studied nineteenth-century western and environmental history in graduate school, and to this day have a keen interest in the subject, having read and enjoyed a wide variety of historians from Frederick Jackson Turner to contemporary feminists. Aubrey Haines wrote a two-volume history of Yellowstone Park, which helped inform some of the issues debated in the book, while other details were drawn from the many excellent books written by Park archivist Lee H. Whittlesey. In addition, there are a number of great books on the late-nineteenth-century environmentalist movement and on the interpretation of nature; the one which comes to mind first is The Nature Fakers: Wildlife, Science and Sentiment by Ralph Lutts. This one covers a slightly later period of time, but is still relevant to the issues of my book. And I will always be deeply indebted to Vine Deloria, whose work questioning the traditional assumptions of science and academia has helped me see the world in new ways.

What made you choose early botanical research in a U.S. national park as the topic for your first novel?

On an unrelated project, working in the special collections library at Montana State University-Bozeman, I discovered photographs of Teddy Roosevelt and John Burroughs in Yellowstone National Park. To this day those images stay with me and, based on seeing those, I started reading about the history of the Park. The Hayden expedition was of particular interest to me. Around the same time, a writer friend suggested botany as a topic, since it was one of the few scientific fields in which women were accepted during the Victorian age. A Hayden-like expedition in the Park seemed a natural extension of those two seemingly disparate ideas and interests.

Andrew Rutherford grows from a blustery curmudgeon to an interesting and sympathetic character during the course of the novel. Did you plan his development from the outset or did he take on a life of his own as you wrote?

I have heard writers say this happens, but I never really believed it until I started writing about Andrew Rutherford, Ph.D. I always envisioned him as being sympathetic by the end of the book, but my initial vision of him was nothing like the character he grew into over the course of writing about that summer in the Park.

Who is your favorite character in the novel? Why?

That’s a difficult question, since I feel a certain affinity with all of them—with the possible exception of the mountain man driver. I think I relate best to Miss Bartram and Professor Merriam, but the so-called minor characters—Rutherford, Miss Zwinger, Mrs. Eversman, and even Peacock—never failed to amaze me when I was writing about them. Clearly, I was quite fond of Rutherford’s bird, having once been amazed myself by a turkey-gobbling raven in the Park.

I am currently at work on another novel tentatively entitled Evolution. It, too, uses a unique format to relay the story and is set in the Montana Territories in the late 1800s.

Beyond the Sea of Ice
William Sarabande

In the Wilderness
Sigrid Undset

The Gospel According to the Son
Norman Mailer

The Red Heart
James Alexander Thom
Back to Top