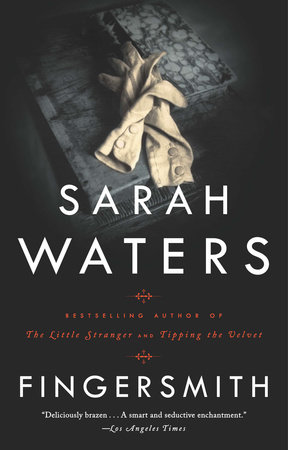 Sue Trinder is an orphan, left as an infant in the care of Mrs. Sucksby, a “baby farmer,” who raised her with unusual tenderness, as if Sue were her own. Mrs. Sucksby’s household, with its fussy babies calmed with doses of gin, also hosts a transient family of petty thieves—fingersmiths—for whom this house in the heart of a mean London slum is home.

One day, the most beloved thief of all arrives—Gentleman, a somewhat elegant con man, who carries with him an enticing proposition for Sue: If she wins a position as the maid to Maud Lilly, a naïve gentlewoman, and aids Gentleman in her seduction, then they will all share in Maud’s vast inheritance. Once the inheritance is secured, Maud will be left to live out her days in a mental hospital. With dreams of paying back the kindness of her adopted family, Sue agrees to the plan. Once in, however, Sue begins to pity her helpless mark and care for Maud Lilly in unexpected ways….But no one and nothing is as it seems in this Dickensian novel of thrills and surprises.

The New York Times Book Review has called Sarah Waters a writer of “consummate skill” and The Seattle Times has praised her work as “gripping, astute fiction that feeds the mind and the senses.” Fingersmith marks a major leap forward in this young and brilliant career.

Sarah Waters, 35, was born in Pembrokeshire, South West Wales, United Kingdom. She studied English Literature at the undergraduate and postgraduate levels, at the universities of Kent and Lancaster. As a student she lived for two years in Whitstable, the sea-side town—famous for its oysters—in which her first novel, Tipping the Velvet, is partly set. In 1988 she moved to London; her first full-time job was in an independent bookshop; later she worked in public libraries. In 1991 she decided to return to postgraduate study, and she spent the next three years writing a PhD thesis, on lesbian and gay historical fiction. She developed a daily writing routine, and a passion for language and composition. She had articles on gender, sexuality and history published in various scholarly journals, including Feminist Review, Journal of the History of Sexuality, and Science as Culture.

But while working on her thesis, and becoming increasingly interested in London life of the nineteenth century, Waters began to conceive the historical novel that would become Tipping the Velvet. With the thesis complete, and supporting herself with bits of teaching and part-time library work, she started to write. The novel was finished in just over a year, and was published in the U.K. by Virago (1998) and in the U.S. by Riverhead (1999).

The British Broadcasting Corporation (BBC) is in the process of adapting the book into a major series with director Andrew Davies, who also directed the BBC’s adaptation of Jane Austen’s Pride and Prejudice and Anthony Trollope’s The Way We Live Now.

By 1991, Waters had already begun her second novel, Affinity. This was completed with help from a London Arts Board New London Writers Award, and appeared in the U.K. in 1999 and in the U.S. in 2000. Waters taught for a time for the Open University, a national educational institution offering undergraduate schooling to mature students from a range of social backgrounds. She has also tutored on creative writing programs. She published articles on literature as recently as 1999, but now devotes herself full time to the writing of fiction. Her third novel, Fingersmith, was completed in 2001, and she is currently at work on her next book. She still lives in London, a city she finds endlessly inspiring; but she dreams, too, of returning to a life by the sea.

The Pursuit of Love
Nancy Mitford

The Other Typist
Suzanne Rindell

The Sense of an Ending
Julian Barnes

The Shadow Land
Elizabeth Kostova
Back to Top