Sister of My Heart Reader’s Guide 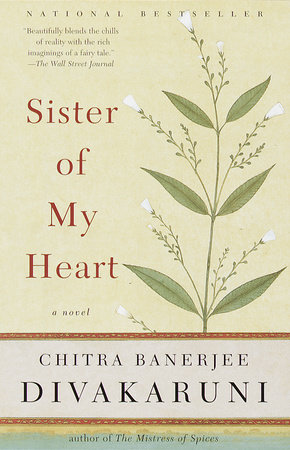 Sister of My Heart Reader’s Guide

In Sister of My Heart, Divakaruni tells the moving story of two cousins, Sudha and Anju Chatterjee. Born twelve hours apart in the same house, the women consider themselves twins, and from a very early age get everything they need from life–love, respect, council, and friendship–from each other. Together they experience the joys, pains, mystical tales, and tiresome tasks that accompany growing up in a traditional Indian house in Calcutta. Their exceptional bond remains the core of the novel as their affection for each other increasingly shapes the course of their lives.

Intensely rich and complex, Sister of My Heart eloquently reveals the underlying tension between the desires of the girls’ mothers, who embrace traditional Indian culture, and those of the Sudha and Anju, who are more enticed by Western philosophies. But an even greater obstacle penetrates the Chatterjee household. The disturbing truth about the circumstances under which Sudha and Anju were born is only known by Sudha, and the secret tortures her and weaves a menacing thread through their friendship. When the cousins are physically separated by arranged marriages, their uncommon bond faces its hardest test. One travels to America, and one remains in India–each to lead lives of more secrets. When tragedy strikes both, they discover that, despite distance and marriage, they must turn to each other once again for support and friendship.

Exceptionally moving, dramatic, and exquisitely rendered, Sister of My Heart is a passionate novel about the extraordinary bond between two women, and the jealousies, loves, and family histories that threaten to tear them apart.

1. What kind of relationship is there between the older generation in India, who live in a world full of mystical tales and magical occurrences, and Anju and Sudha’s generation, which is more drawn to Western ideals? Why are both cousins, especially Anju, skeptical of their own culture and interested in the west, particularly America? How do they incorporate each world into their lives?

2. How are Sudha and Anju different, and how are they similar? Despite their differences, what continues to keep their relationship strong?

3. The mothers tell the girls that loving someone too much is dangerous. What are they trying to achieve with this warning?

4. What does the ruby symbolize? What is the significance of Anju and Sudha being so "unlucky" in the circumstances under which they were born? Why was it significant for Sudha to know the truth about her past and not be able to tell Anju?

5. There is often a great disparity between what is the proper thing to do and what is the fun, exciting thing to do. How does this theme play itself out in the novel?

6. Why does Anju’s mother welcome Sudha and her mother into the family even though she knows the truth about Sudha’s father? In contrast, why is Sudha’s mother so harsh and seemingly ungrateful? Do she and her daughter belong in the house?

7. The mothers often tell stories and gossip. What role do these stories play in their livesand in the lives of Sudha and Anju?

8. According to Bidhata Purush’s predictions, Anju is supposed to be brave and clever, fight injustice, marry a fine man and travel the world, while Sudha is supposed to have a life of sorrow. Do the girls live up to these predictions? If not, how else would you characterize each?

9. How did having a man enter each of their lives affect the girls’ friendship? Would the friendship have evolved differently had they not married? Are men portrayed positively or negatively in this book?

10. Why is there jealousy between the two cousins? Is it inevitable despite their mutual love? Do they ever successfully rise above it?

11. How does Anju change after she comes to America? Would she have been as independent and assertive if she had stayed in India?

12. Sudha defies traditional Indian culture by leaving her husband and raising her child on her own. How do her actions affect her deep connection to Indian culture? How does the author portray Sudha’s decision?

13. The keeping of secrets and the telling of lies play a huge part in the novel. Why are so many secrets kept? Is it better to keep some secrets and to tell some lies or to always share the truth?

14. Discuss your reaction to finding out Singhji’s identity. Was Sudha’s response reasonable?

15. Should Sudha have gone with Ashok? Throughout the novel, does Sudha give up too much for Anju? Are sacrifices required of a true friend?

16. For Discussion: Divakaruni’s Novels and Stories

17. In the story "Affair," Abha says, "It’s not wrong to be happy, is it? To want more out of life than fulfilling duties you took on before you knew what they truly meant?" How is this idea further developed in The Mistress of Spices? In Sister of My Heart?

18. In Divakaruni’s stories, women are wives and mothers, but the men are portrayed primarily as husbands, not fathers. How are the men’s roles in the novels similar to or different from those in the stories?

19. How does the Indian immigrant experience compare to that of other immigrants–Spanish, Italian, Chinese?