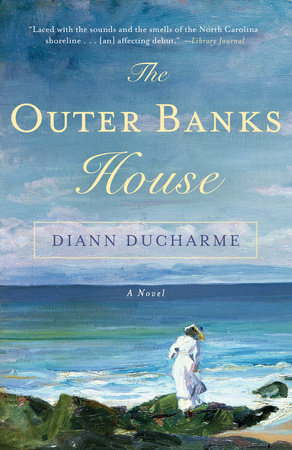 1.  The Outer Banks of North Carolina is a chain of thin, fragile barrier islands that stretch the length of the state. They are rich in history and natural beauty, but in 1868, they were quite isolated from the mainland in both location and national progress. How does the setting of the Outer Banks serve as a character in the novel? How does the island’s remoteness and pervading provinciality help to further Abby and Ben’s relationship?

2.  The novel opens with Abigail Sinclair eschewing proper decorum and running across the island to get to the ocean. Why do you think Diann Ducharme opened the novel in this way? How does Abigail’s character change throughout the novel? What events bring about these changes?

3.  Ducharme alternates points of view between the two main characters, Abigail and Ben.  Why do you think she chose to use these two points of view to tell the story? How does this decision further the novel’s plot?

4.  Each chapter begins with a quote from the classic work Robinson Crusoe. Why do you think Ducharme chose Robinson Crusoe as a vehicle of discussion? In what ways do the quotes reflect what is happening in the novel? How does Robinson Crusoe further the relationship between Abby and Ben?

5.  What are the Bankers’ opinions of the summer vacationers? Why does Ben see Abby differently than the other Bankers do? Why does Ben want a different life than his father has? How do Ben’s aspirations both help and hinder him throughout the novel?

6.  Racial injustice is a major theme of the book. How does Abby come to terms with her own role in her family’s slave-owning past? How does she eventually show her contrition?

7.  Why does Abigail forgive Ben for his part in her father’s man-hunt? Why does her mother forgive Abby for teaching at the Freedmen’s school?

8.  Roanoke Island is a small island between the mainland of North Carolina and the Outer Banks. It is also full of history, having been the site of two doomed colonies. How is the Freedmen’s Colony similar to the Sir Walter Raleigh’s “Lost Colony”? How are the two colonies different from each other?

10.  What is your opinion of Elijah Africa? Why do you think Elijah Africa returned to North Carolina to become a preacher?

12.  What does Abigail give up when she rejects Hector’s marriage proposal? What does Ben give up when he breaks off his relationship with Eliza Dickens? Do Abby and Ben fully realize the implications of their decisions as they make them?

13.  What does the title of the book, The Outer Banks House, refer to? Did your opinion about the meaning of the title change at the end the book?

14.  What similarities does Abby see between her Uncle Jack and Ben? Why does Abby throw Uncle Jack’s letter into the ocean at the end of the novel?

15.  Do you think Abby and Ben will find happiness in “the Outer Banks House”? Why or why not?


Learn More About The Outer Banks House
print
Back to Top