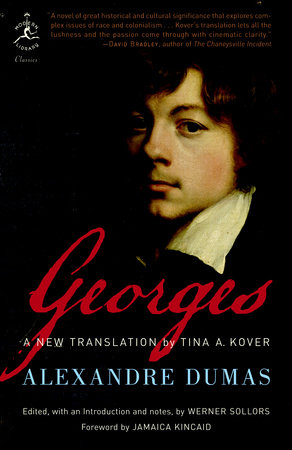 1. Dumas opens the novel advertising the île de France as “the Promised Land . . . [a] land of fertile fields, bountiful harvests, and endless springs and summers bursting with flowers and fruit. . . . A veritable Aphrodite, born of sea foam to reign over a celestial empire” (p. 5). Why do you think he chooses such an embellished tone to describe the setting?

2. As Werner Sollors points out in his Introduction, Alexandre Dumas never visited the île de France in his lifetime; his grandmother, however, had been a slave on Haiti, an island with similar mixed demographics and the site of history’s most famous slave rebellion. Why do you think Dumas did not choose to set his novel there?

3. When Georges goes abroad to study in Paris, he is popular, wealthy, and well loved. Why is he treated so differently in Europe than on the island? Why does he return to the île de France?

4. When Jacques finally returns to the île de France, Georges expresses some concern upon learning his brother’s profession: “Naturally, Georges’s European-educated heart had given a lurch of regret when he learned that his brother was a trader in human flesh,” but their father is less concerned: “As for Pierre Munier, an islander born and bred, he did not give his elder son’s profession a second thought” (p. 138). How do Pierre and Jacques reconcile their own mistreatment as mulattos with their position as slave owners and even traders?

5. Though the focus of the racial tensions in the novel revolve around blacks and whites, the île de France is home to a surprising number of ethnic groups, including Muslim and Hindu Indians, Chinese, Arabs, Malagache, and Malays. How would you describe Dumas’s characterization of some of the other ethnic characters, particularly Miko-Miko and Antonio the Malay?

6. Dumas sets up nearly identical scenes between Nazim and Laïza and between Jacques and Georges at different parts in the novel. In each, one brother tries to convince the other to flee with him, but the other brother refuses. Why do you think he included these parallel scenes? How do the pairs of brothers compare to each other?

7. Sara seems to be a typical romantic heroine—vulnerable and in need of rescue. But she also shows strength and enlightenment. What surprised you about Sara’s character? What, if anything, do you think sets her apart from other heroines? How important for her characterization is the contrast with the figure of the governess Henriette?

8. In her Foreword, Jamaica Kincaid portrays Georges as a very conflicted character: “Georges is not a slave but he is descended from slaves; Georges is not white but he could pass for white; Georges is not an entirely free man (he is partly descended from the enslaved) but his manners in every way are so correct that really free men (European) cede him a place in their presence and even their society” (pp. xii–xiii). How do you think these contradictions shape Georges’s character? His motivations?

9. Why do you think Lord Murray goes through with Georges’s death sentence? How significant is their friendship to the story?

10. Several characters in the novel, including Georges, Laïza, and Lord Murray, seem to abide by a particular code of honor that others lack, particularly M. de Malmédie, Henri, and Antonio the Malay. How do you think each of these characters would define honor?

11. The publication of Georges preceded Dumas’s best-known works, the d’Artagnan trilogy, the Valois romances, and his sweeping success, The Count of Monte Cristo. How, if at all, do you think Dumas sets readers up for these longer works in Georges? What particular themes and elements of his style do you see emerging?

The Devil in the Flesh
Raymond Radiguet

The Thing About December
Donal Ryan

All Our Worldly Goods
Irene Nemirovsky

The Age of Extremes
Eric Hobsbawm

No Telephone to Heaven
Michelle Cliff

Balcony in the Forest
Julien Gracq

The Fish Can Sing
Halldor Laxness

All We Shall Know
Donal Ryan

A Map of Home
Randa Jarrar

Walking Into the Night
Olaf Olafsson

The Leopard
Giuseppe Tomasi Di Lampedusa
Back to Top