In the Company of the Courtesan Reader’s Guide 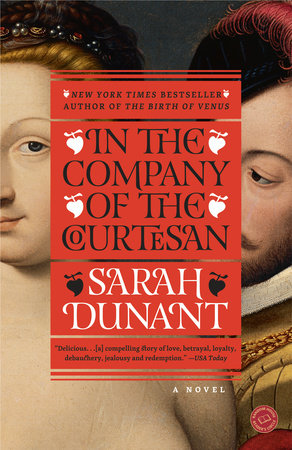 In the Company of the Courtesan Reader’s Guide

print
In the Company of the Courtesan Reader’s Guide


About IN THE COMPANY OF THE COURTESAN


IN THE COMPANY OF THE COURTESAN grew out of two 16th century Italian paintings. In one, an attractive young woman, dressed only in her hair, lies languidly on a bed, a sleeping dog curled up at her feet. She stares directly out at the viewer; the invitation she offers is coyly explicit. An early “page three girl”, or a subtle renaissance masterpiece?

Titian’s “Venus of Urbino” (called after the city where it hung for many years), has many claims to fame. Titian was Venice’s greatest artist when he painted it in the 1530s and Venice was the most powerful city in Europe, the hub of 16th century global capitalism. But it’s that look on the young woman’s face that really marks out this portrait. Up until now, renaissance art had had its fill of classical naked Venuses, but they had all been demure; asleep or eyes elsewhere, pretending they didn’t know you were looking. There is no pretending here.

The model was almost certainly a Venetian courtesan. These were women to make your mouth water, as vital to the city’s well-being as the waterways that ran through it. To keep the wealth of Venice’s ruling elite intact, each generation of nobles had to sacrifice some of their sons to eternal batchelorhood: spoilt men used to the privileged comforts of home, and eager for a bit on the side without any pressure of marriage. Courtesans were the answer. Women of lower birth but high wit, beauty and the cunning to keep their patrons well entertained and satfistied. I spent a year researching these formidable women, half my time on the canals and back streets of Venice, the other half in the British Library. There was gold in that history. Politicians, churchmen, bankers, writers, diplomats, rich merchants, they all sat at the courtesan’s table and put down the money to get into her bed and keep her in the manner to which, for a while at least, she could become accustomed. This was Venice at its most powerful, the church at its most corrupt and sin at its most deliciously profitable. What more could a novelist ask for?

The only question was, through whose eyes did I tell the story? Not the woman on the bed. Every time I tried to imagine inside her head she came out too modern. The truth was more complex. The fact that women like Titian’s Venus were successful in 16th century Venice was not to do with any early spark of proto-feminism. No, the courtesan’s talents showed themselves in ways more fitting to the period.

But if I couldn’t tell it through her eyes, then where else could I go? The men were all too self absorbed or besotted. I needed someone with a clearer head and a eye for the absurd as well as the romantic. I found him in another painting, in the Academia Gallery in Venice. There, on the bottom left of a Venetian street scene by Vittorio Carpaccio was a dwarf, well dressed and with a keen intelligence in his eyes. A man standing outside the scene, watching the world and its power games from a different perspective, yet a man whose exoticism gave him entrance to high places. It was fact as well as fiction. There are records of courtesans who were known to keep dwarfs, along with parrots, monkeys and other “interesting pets.”

Once I had their partnership I had the story. His voice, her body. The courtesan and her faithful majordomo, the model and the manager, beauty and beast, both of them sharper than they looked and cleverer than most of the men they set out to dupe. Grifters, 16th century Venice style. What a fortune was to be made there. IN THE COMPANY OF THE COURTESAN; how to take a city by storm. Until you get caught…..

1. In what way does In the Company of the Courtesan seem historically accurate to you? What details about Renaissance Italy do you think came from the author’s imagination, and what aspects of it do you think are based on her historical research of the period?

2. Do you think a character like Fiammetta could exist in today’s world? What, if anything, is modern about her?

3. What did you think of Fiammetta’s relationship with her mother, and of her mother’s influence on her life?

4. In the Company of the Courtesan is told from Bucino’s perspective. Why do you think the author wrote it this way, rather than from Fiammetta’s point of view? What are the benefits of hearing the story and seeing Venice from Bucino’s standpoint? What are the limitations?

5. We tend to think of Fiammetta’s profession as one that is very hard on women, one that doesn’t make for a happy life. On the whole, do you consider Fiammetta to be content or unhappy?

6. Did you find La Draga to be a likeable character? Did your view of her change as your reading progressed?

7. Is it accurate to describe Courtesan as a novel of “rebirth”? What are some other themes of this novel?

8. Do you think Fiammetta was truly in love with Foscari? If you don’t, how would you define their relationship? Was Bucino’s anger at this relationship justified?

9. What does sixteenth-century Venetian society have in common with our society today?

10. Why do Bucino and Fiammetta make such a good team? What makes them successful?

11. The picture on the cover of Courtesan is a detail from a painting by Tiziano Vecellio (Titian). When you were reading the novel, did you form an image of Fiammetta that was based on this cover image, or did you make up your own image of her? If your own, can you describe it?

12. What predictions would you make about little Fiammetta’s future life? Do you think she’ll have the same profession as her namesake?

Learn More About In the Company of the Courtesan
print

I Shall Be Near to You
Erin Lindsay McCabe

Zoli
Colum McCann
Back to Top