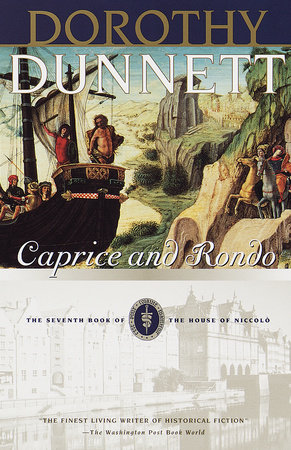 The questions, discussion topics, historical background, and author biography are designed to enhance your group’s reading and discussion of Dorothy Dunnett’s eight bestselling novels in the House of Niccolò. We hope this guide will enrich your experience of these intriguing and adventuresome works of historical fiction.

Winter 1474 finds Nicholas exiled in the frozen port of Danzig, Poland. His Machiavellian exploits in Scotland have cost him friends and family–not to mention countless riches. As the ice melts, temptations arise. Will he assist the Muslim Prince Uzum Hasan against the Turks? Will he lose himself among the secret, scented gardens of the Crimea, in the arms of a close friend’s bride? As Nicholas pursues his future, his estranged wife, Gelis, seeks the truth about his past, only to discover the secret identity of his latest comrade in arms–a tantalizing ghost from the past poised to deal him the crowning death blow. Shimmering with detail, alive with intrigue, Caprice and Rondo is Dorothy Dunnett’s quicksilver evocation of a world where joy is fleeting, love is unexpected, and truth the rarest commodity of all.

1. For Discussion: Caprice and Rondo

A single exchange of letters, puzzles, music and numbers, constitutes the only adult meeting of Nicholas and his grandfather, Thibault de Fleury. What do you think of this brilliant and enigmatic figure? How does he help change the relationship between Nicholas and Gelis? Do you think he foresaw or intended this consequence?

2. Dorothy Dunnett puts Hans Memling’s massive and elegant painting of "The Last Judgement" to many uses in the novel; one of them, surely, symbolic of the protagonist. In what respects does Nicholas fit each category in the painting, the Elect, the Saved, the Damned? What are the signs of a self destructive spirit, of a redeemable spirit, in him in the first half of the novel?

3. Two of the men who have vexed and manipulated Nicholas de Fleury for decades become humanized, their motives clarified, during the course of Caprice and Rondo. What view emerges, finally, of the subtle Greek aristocrat Nicholai Giorgio de’ Acciajuoli? Of the boisterous Latin Patriarch Ludovico da Bologna?

4. Two nations-in-the-making come to grief in this novel–one in the East, one in the West. A new Persia might have consolidated itself in a Western-assisted strike at the Turkish empire, a new Burgundy might have arisen to dominate the European heartland from the North Sea to the Middle Sea. How much are these failures a matter of the tides of "history"? the sway of political interests? the imperfections of key individuals? How do these failures affect the life of Nicholas?

5. What does Anna want from Nicholas, and why? How does she produce the opposite of what she wants? Or does she, in the end, get what she wants? How is her "caprice" a "rondo" of Gelis’s actions in the previous novel?

6. Throughout the eight books of the House of Niccolò, a series a picture emerges of Sophie de Fleury, the mother of Fro.
For Discussion: The House of Niccolò, Nicholas, and of her centrality in the life of her son. Can you put this picture together now — the Sophie of rumor and gossip, the Sophie of Nicholas’s slowly revealed memories, of his maturer judgement, of Andro Wodman’s reporting? Are there still some mysteries and obscurities in this portrait?

7. The House of Niccolò series offers a sustained and in many ways highly sophisticated version of the changes in intellectual, political and psychological structures which mark the transition from the medieval to the modern world. But like any good set of historical novels it abounds too in individual scenes and characters of great emotional, dramatic, and visual power, or stylistic verve, "set pieces" which hang in the memory even longer, perhaps, than the plot or the author’s philosophy of history. What are some of your favorites here–scenes of comic impact or tragic illumination? Best-drawn villain or victim, most vexatious female adolescent? Most breathtaking fight or chase? Most engrossing moment of romance? Most stunning surprise?

9. Some readers will have come to the Niccolò series after reading the Lymond Chronicles, to which they are a ‘prequel’; others have now finished the Niccolò series and will go on to the sequel, the Lymond Chronicles. What are some of the dividends of doing it the first way? The second way? How (after a reading of both) are these two heroes, these two worlds, these two intricate plots, alike and different?

She has also led a busy life in public service. In the past, she has been a member of the Board of Trustees of the National Library of Scotland, a Trustee of the Scottish National War Memorial, and Director of the Edinburgh Book Festival. She has also served on numerous cultural committees, and is a Fellow of the Royal Society of Arts. In 1992 she was awarded the Office of the British Empire for services to literature. She lives in Scotland and has two sons and one grandson.
Learn More About Caprice and Rondo
print

The Lost Sisterhood
Anne Fortier
Back to Top