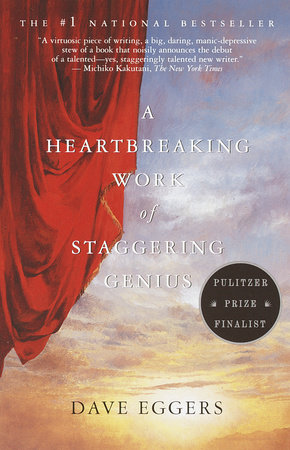 The questions, discussion topics, and author biography that follow are designed to enhance your group’s reading and discussion of Dave Eggers’ A Heartbreaking Work of Staggering Genius. We hope that they will provide you with a variety of ways of thinking and talking about this extraordinary and unique book.

Dave Eggers was only twenty-one when his parents died of cancer within weeks of each other. In the aftermath of their deaths, Eggers became the acting parent of his eight-year-old brother, Toph. A Heartbreaking Work of Staggering Genius is the story of their life together, with Dave’s efforts at housekeeping, cooking, and getting Toph to school on time comically at odds with his desire to spend time at bars with friends, to put out a satirical magazine–in short, to live a life suited to a person his own age.
This thoughtful, moving, and at times uproariously funny memoir has been widely hailed as a major literary debut, not least for Eggers’ ability to combine rueful humor with unmatched insight into the banality and pathos of contemporary life.

1. The material preceding the main text in this book–called "front matter" in the publishing business–has been entirely taken over by the author, including the usually very official copyright page. Why might the publisher have allowed Eggers to take this unconventional route? Why does Eggers work so extensively at disrupting the formality of publication and his status as an author?

2. On the copyright page we find the statement, "This is a work of fiction"; and at the beginning of the preface Eggers writes, "This is not, actually, a work of pure nonfiction." What point is Eggers making by casting all these doubts on the veracity of the book’s contents? In his discussion about the current popularity of memoirs [pp. xxiÐxxiii], Eggers admits that the book is a memoir but encourages his readers to think of it as fiction. What is the difference, in a work of literature, between fact and fiction, and does it matter?

3. In the remarkable acknowledgments section, which is a brilliant critique and discussion of the book as a whole, Eggers points out that "the success of a memoir . . . has a lot to do with how appealing its narrator is" [p. xxvii]. What is appealing about Eggers as a narrator?

4. Eggers notes that the first major theme of the book is "The Unspoken Magic of Parental Disappearance" [p. xxviii]. It is a psychological truism that most children occasionally fantasize about being orphans, because parents often stand in the way of their children’s desires. Along these lines, Eggers admits that the loss of his parents is "accompanied by an undeniable but then of course guilt-inducing sense of mobility, of infinite possibility" [p. xxix]. Does he ever find a way to resolve his conflicting emotions of grief and guilt?

5. If it is true, as Eggers points out, that he is not the first person whose parents died or who was left with the care of a sibling, what makes his story unique?

6. Eggers worries that because he is neither a woman nor a neat, well-organized person [pp. 81, 99], people assume that he can’t take care of Toph. Which aspects of Eggers’ parenting are most admirable? Which are most comic? What are the benefits and drawbacks of each aspect?

7. How do Eggers’ memories of his father compare to those about his mother? To what degree are his feelings about his parents resolved, or at least assuaged, through the act of writing this book?

8. Much of the central part of the book relates to the business of launching and producing Might magazine. What does this section reveal about the concerns, desires, and frustrations of thoughtful, energetic twenty-somethings in contemporary America?

9. Eggers expresses ambivalence about having written this book because he feels guilty about exploiting his family’s misfortune and exposing a private matter to the public. Among the epigraphs that Eggers considered, and then didn’t use, for the book are "Why not just write what happened?" (R. Lowell) and "Ooh, look at me, I’m Dave, I’m writing a book! With all my thoughts in it! La la la!" (Christopher Eggers) [p. xvii]. How do these two epigraphs crystallize the memoir writer’s dilemma?

10. Why does Eggers judge himself so harshly for returning to the family’s old house in Lake Forest and for trying to retrieve his mother’s ashes? Does the trip provide him and his story with a sense of closure, or just the opposite? Is there a central revelation to Eggers’ narrative, a strong sense of change or a significant development? Or would you say, on the contrary, that the book has the haphazardness and lack of structure that we find in real life?

11. Eggers refers, half-jokingly, half-seriously, to himself and Toph as "God’s tragic envoys" [p. 73]. Is it true, as Eggers suggests, that tragic occurrences give those to whom they happen the feeling of having been singled out for a special destiny? Is it common among those who have suffered intensely to expect some sort of recompense?

12. Recurring throughout the interview for MTV’s The Real World [chapter VI] is the image of what Eggers calls "the lattice." What does he mean by this, and does it amount to a kind of spiritual belief on his part?

13. Mary Park, writing for Amazon.com, notes that "Eggers comes from the most media-saturated generation in history–so much so that he can’t feel an emotion without the sense that it’s already been felt for him. . . . Oddly enough, the effect is one of complete sincerity." How does Eggers manage to turn his generation’s burdens of self-consciousness into strengths? What are the qualities that make his writing so vivid and memorable?

Dave Eggers is the author of four books, A Heartbreaking Work of Staggering Genius, You Shall Know Our Velocity!, How We Are Hungry, and What Is the What. He is the editor of McSweeney’s, a quarterly magazine and book-publishing company, and is cofounder of 826 Valencia, a network of nonprofit writing and tutoring centers for young people. His interest in oral history led to his 2004 cofounding of Voice of Witness, a nonprofit series of books that use oral history to illuminate human rights crises around the world. As a journalist, his work has appeared in The New Yorker, Esquire, and The Believer. He lives in the San Francisco Bay area with his wife and daughter.
Learn More About A Heartbreaking Work of Staggering Genius
print
Back to Top