You Shall Know Our Velocity Reader’s Guide 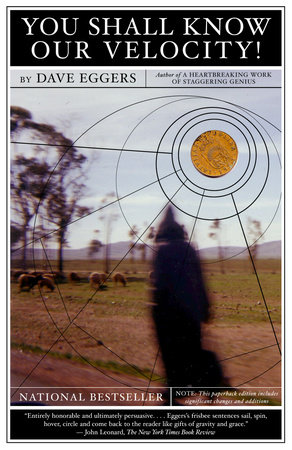 You Shall Know Our Velocity Reader’s Guide

print
You Shall Know Our Velocity Reader’s Guide

The introduction, discussion questions, suggestions for further reading, and author biography that follow are designed to enhance your group’s discussion of Dave Eggers’s You Shall Know Our Velocity!. We hope they will offer you interesting ways to talk about a novel that is by turns hilarious, grief-stricken, furious, compassionate, and always surprising.

Dave Eggers’s first book, A Heartbreaking Work of Staggering Genius, turned the conventions of the memoir inside-out. It questioned, parodied, stretched, and subverted the rules for writing about one’s life in a book that ultimately lived up to its tongue-in-cheek title. The deaths by cancer of Eggers’s parents, within a few weeks of each other, his efforts to raise his younger brother, Toph, coupled with Eggers’s self-conscious genre-bending, made the book both deeply emotional and brilliantly innovative.

In You Shall Know Our Velocity!, his first novel, Eggers tells another story of loss and its aftermath. After their childhood friend Jack is killed in a highway accident, Will and Hand decide to fly around the world, giving away the windfall money Will has recently received. And while their travels take them from Chicago to Dakar, Morocco, Estonia, and Latvia, the real journey is an interior one, into Will’s tormented consciousness. He can give away his money—and the occasions for doing so range from the hilarious to the awkward to the poignant—but the voices in his mind are another matter. However much he wants to “throw his head to the world,” it remains firmly on his shoulders, filled with memories of childhood and of Jack, and with an overwhelming desire for vengeance—on the yahoos who beat him up and on the trucker who killed his friend.

In writing that is brilliant, unpredictable, and paced at breakneck speed, Eggers takes readers halfway around the globe and all the way into the inner world of his narrator’s unrelenting grief.

1. You Shall Know Our Velocity contains drawings, photographs, and reproductions of notes and maps that Will and Hand create in the story. How surprising is it to come upon such visual elements in a literary text? What do they add to the novel? In what ways do they challenge the conventions of the novel form?

2. Do Will and Hand decide to take their trip in order to escape their grief over Jack’s death, or to confront that grief and possibly transform it? Is their trip an act of penance? What guilt do they feel in relation to Jack?

3. Will received his money for allowing an advertising company to use his silhouette, a shadow image of him screwing in a light bulb. In what ways is this circumstance both meaningful and absurd? What other absurd elements appear in the novel? Does the book’s humor diminish or deepen its more serious concerns?

4. Will carries on internal conversations and arguments in his head, with Hand, with strangers, with Jack. But he’s tired of them. “I wanted the voices silenced and I wanted less of my head generally” [p. 27]. Why is he so tormented by these voices? What does he want instead of the constant arguing? Does he find it by the end of the story?

5. In Estonia, Will questions why he is giving away his money: “Was the point to give it to people who needed it, or just to get rid of it? I knew the answer, of course, but had to remind Hand” [p. 239]. What is the point of giving the money away? Why does Hand need to be reminded?

6. Hand describes at length the nomadic tribe of “Jumping People” in South America. These people believed in “the impermanence of place” [p. 376] and felt that they carried the souls of their dead loved ones on their backs like mountains. In what ways is their story relevant to Will and Hand’s story? In what instances is jumping, or leaping over, important in the novel? Why has Eggers used the message the Jumping People carved into the cliff above their village, “YOU SHALL KNOW OUR VELOCITY,” as his title?

7. Will winces at Hand’s awkwardness when he spills his soda while giving money to a Moroccan family. “What kind of person brings his soda? You’re giving $300 to people in a shack and you bring your soda? Nothing we did ever resembled in any way what we’d envisioned” [p. 226]. Why is it so hard to give the money to people gracefully? What are some of their more fanciful ideas about how to deliver the money? Why is the way they give it so important to them?

8. In what sense can the novel be read as an elegy to childhood, or to the lost innocence of childhood? What childhood experiences do Will and Hand remember most vividly? In what ways is their behavior still childlike?

9. Will describes a swarm of birds as “swinging to and fro, overlapping, like a group of sixth graders riding bikes home from school” [p. 101]; and of the smoothness of a Moroccan woman’s skin, he says: “Next to skin like that, ours seemed so rough, like burlap woven with straw” [p. 220]. Where else does this kind of metaphorical language appear? What does it add to the novel?

10. Near the end of the novel, as they prepare to part, Hand asks Will when he will return from Mexico. Will says he doesn’t know but thinks to himself “I’m going to keep going” [p. 389]. What does he mean by this? Is he suggesting suicide, the death by drowning referred to in the novel’s opening sentence?

11. Will is beaten when Hand disappears. Later, in one of his interior dialogues, Will says “Most of being a man is being there, Hand” [p. 347]. Why is “being there” so important for Will? What other absences haunt him? Is Will able to be fully “there” for others?

12. Apart from disencumbering them of Will’s money, how does this journey affect Will and Hand? Does it affect them differently? What do they discover about themselves and each other, about the world and their place in it, during the course of their travels?

13. In what ways does Eggers speak for or represent not only his own experience but the sensibility of his generation? How does that sensibility differ from previous generations?

14. Will’s mother thinks it is “condescending” to swoop in and give poor people cash, while Will considers that attitude illogical, a defense for her own “inaction” [p. 123]. Is Will right? Is his way of giving better than his mother’s support of charities? What is the essential difference between giving something to someone face to face as opposed to giving through a charitable institution? In what sense is the novel, as a whole, an act of giving?

Dave Eggers is the author of A Heartbreaking Work of Staggering Genius. He currently lives in San Francisco, CA.

A Book of Common Prayer
Joan Didion
Back to Top