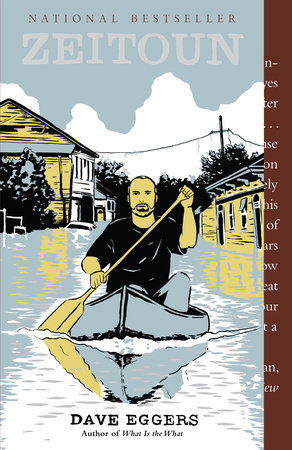 This guide is intended to enhance your group’s reading and discussion of Dave Eggers’s Zeitoun, a harrowing nonfiction account of what happened to one man, and his family, in the chaotic aftermath of Hurricane Katrina.

Abdulrahman Zeitoun is a Syrian-born entrepreneur who runs a busy painting company in New Orleans. He is a devout Muslim, married to a native of Baton Rouge who had converted to Islam before meeting Zeitoun. As Hurricane Katrina barrels toward New Orleans, his wife Kathy takes the children out of town, while Abdulrahman stays to keep an eye on their house and several rental properties they own. In the first couple of days, his decision to stay behind seems a good one, and even after the levees break and the streets and houses fill with water, he is able to help several people who have stayed behind but now need to be rescued. As the National Guard enter the city, armed with machine guns and surveillance helicopters, things begin to go very wrong for Abdulrahman. He is taken into custody and put into a temporary jail—a cage, in fact—hastily erected behind the Greyhound station. There he is subject to strip searches, and he witnesses beatings and other mistreatment of fellow prisoners, and is denied the right to phone his wife and let her know where he is.

Zeitoun’s ordeal is the main subject of this harrowing nonfiction book, while Eggers enriches the shocking tale of injustice with a richly layered account of Zeitoun’s early life on the coast of Syria, his large and loving family, his relationships with his friends, employees, and neighbors.

1. “Notes About This Book” (xv) gives a sense of how the book was written, whose point of view it reflects, and Eggers’s efforts at accuracy and truth in his depiction of events. By choosing to portray the response to the hurricane through its effects on one family, what kind of story (or history) does he achieve?

2. The book opens with “Friday, August 26,” an expository chapter that introduces us to Zeitoun’s family life and his business life, the two very interconnected. What are some of the ways in which the descriptions here draw you in as a reader, and make these people and their situation real? Why is the timeline a good structural choice for this story?

3. Kathy has grown up as a Southern Baptist. Drawn to Islam through her childhood friend Yuko, she decides to convert. Why, when she comes to visit wearing her hijab, does her mother tell her, “Now you can take that thing off” (57)? Why does the prayer from the Qur’an quoted on page 51 have a strong effect on her? What does her reaction to the evangelical preacher who mocks Islam and says that Kathy’s temptation to convert was the work of the devil (65–66), say about Kathy’s character and intelligence?

4. Do Abdulrahman, Kathy and their children make up an unusual American family, or not? How would you describe the relationship between Zeitoun and Kathy, in marriage and in business? What effect does their religion have on the way others in the community see them?

5. Why has Eggers woven into the story accounts of Zeitoun’s past in Syria, his upbringing, his brother Mohammed, the champion swimmer, his brother Ahmad, and their close bond? What effect does this framework of family have on your perception of Zeitoun’s character, his ethics, his behavior?

6. The plight of the neighborhood’s abandoned dogs comes to Zeitoun’s attention as “a bewilderment, an anger in their cries that cut the night into shards” (93). The next day, he sets out in the canoe and tries to do what he can for animals and people trapped by the flood. How does Zeitoun feel about what he is doing? How does he think about these days after he has been imprisoned (262–64)?

8. Part IV (203–90) tells the story of Zeitoun’s imprisonment. Here we learn in great detail how Zeitoun is denied the right to call Kathy, how his injured foot is not attended to, how the other men are beaten, stripped, and starved, how he prays constantly, yet loses hope. What is the impact, as you read, of this narrative?

9. “Zeitoun is a more powerful indictment of America’s dystopia in the Bush era than any number of well-written polemics” (Timothy Egan, New York Times, August 13, 2009). Would you agree with this statement? Can Zeitoun be read as a contribution to the history of hurricane Katrina and the failure of government to handle the disaster effectively?

10. Discuss Kathy’s situation, and her actions once she learns where Zeitoun is. The aftermath is more difficult, and she still suffers from physical and psychological problems that seem to be the result of post-traumatic stress. What was the most traumatic part of her experience, and why (319)?

11. Given that the other men who were imprisoned with Zeitoun were held much longer than he was, and that Nasser lost his life savings, is it surprising that these men were not compensated in any way for their time in prison (320–21)?

12. What is Zeitoun’s feeling now about what happened? How does he move forward into the future, as expressed in the book’s closing pages (322-25)?

13. If you have read What is the What, Eggers’ novel about Sudanese refugee Valentino Achak Deng, how does Zeitoun compare? Discuss Eggers’ approach to writing about traumatic regional and political events through the lives of individuals impacted by them.

Dave Eggers is the author of six previous books, including What Is the What, a finalist for the 2006 National Book Critics Circle Award and winner of France’s Prix Medici.  That book, about Valentino Achak Deng, a survivor of the civil war in southern Sudan, gave birth to the Valentino Achak Deng Foundation, run by Mr. Deng and dedicated to building secondary schools in southern Sudan.  Eggers is the founder and editor of McSweeney’s, an independent publishing house based in San Francisco that produces books, an eponymous quarterly journal, a monthly magazine (The Believer), and Wholphin, a quarterly DVD of short films and documentaries.  In 2002, with Nívine Calegari he cofounded 826 Valencia, a nonprofit writing and tutoring center for youth in the Mission District of San Francisco.  Local communities have since opened sister 826 centers in Chicago, Los Angeles, Brooklyn, Ann Arbor, Seattle, Boston, and Washington, D.C. In 2004, Eggers taught at the University of California–Berkeley Graduate School of Journalism, and there, with Dr. Lola Vollen, he cofounded Voice of Witness, a series of books using oral history to illuminate human rights crises around the world.  A native of Chicago, Eggers graduated from the University of Illinois with a degree in journalism.  He now lives in the San Francisco Bay Area with his wife and two children.

No Shortcuts to the Top

The Legend of Colton H. Bryant

Miracle in the Andes

Death of Innocence
Back to Top