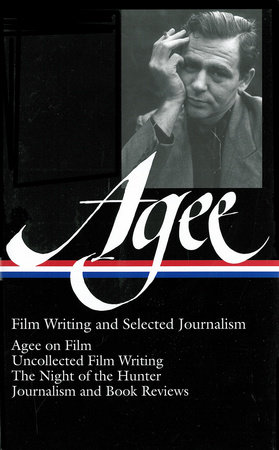 James Agee brought to bear all his moral energy, slashing wit, and boundless curiosity in the criticism and journalism that established him as one of the commanding literary voices of America at mid-century. In 1944 W. H. Auden called Agee’s film reviews for The Nation “the most remarkable regular event in American journalism today.” Those columns, along with much of the movie criticism that Agee wrote for Time through most of the 1940s, were collected posthumously in Agee on Film: Reviews and Comments, undoubtedly the most influential writings on film by an American. This Library of America volume supplements the classic pieces from Agee on Film with previously uncollected writings on Ingrid Bergman, the Marx Brothers, Alfred Hitchcock’s Lifeboat, Vittorio De Sica’s Shoeshine, and a wealth of other cinematic subjects.

Whether reviewing a Judy Garland musical or a wartime documentary, assessing the impact of Italian neorealism or railing against the compromises in a Hollywood adaptation of Hemingway, Agee always wrote of movies as a pervasive, profoundly significant part of modern life, a new art whose classics (Chaplin, Dovzhenko, Vigo) he revered and whose betrayal in the interests of commerce or propaganda he often deplored. If his frequent disappointments could be registered in acid tones, his enthusiasms were expressed with passionate eloquence.

Agee’s own work as a screenwriter is represented by his script for Charles Laughton’s unique and haunting masterpiece of Southern gothic, The Night of the Hunter, adapted from the novel by Davis Grubb. This collection also includes examples of Agee’s masterfully probing reporting for Fortune—on subjects as diverse as the Tennessee Valley Authority, commercial orchids, and cockfighting—and a sampling of his literary reviews, among them appreciations of William Faulkner, Virginia Woolf, S. J. Perelman, and William Carlos Williams.

James Agee (1909-1955) was a novelist, journalist, poet, screenwriter and film critic, the author of such landmark works as Let Us Now Praise Famous Men and Agee on Film. His posthumously published novel A Death in the Family (1957) was awarded… More about James Agee