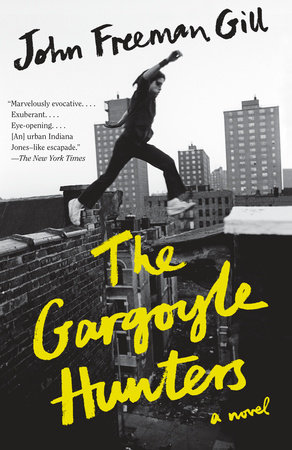 The questions, discussion topics, and reading list that follow are intended to enhance your reading group’s conversation about The Gargoyle Hunters, John Freeman Gill’s poignant and elegiac love letter to a lost New York—the story of one young man navigating the city in all of its grandeur and grit.

1. Discuss the significance of the epigraphs that open The Gargoyle Hunters. How do these quotes set the tone for the novel?

2. In the prologue, the narrator includes a quote from his sister, Quigley, summarizing her thoughts on the changing landscape of New York and explaining why she has decided to leave the city: “I’m tired of being homesick in my own hometown.” How does this expression of grief for the city’s shifts and changes echo throughout the novel? How does Griffin’s sense of nostalgia for New York differ from Quigley’s? From that of their parents’?

3. On page 8, Griffin’s recollection of a party from his childhood concludes with “My father was no longer beside me.” This line appears again on page 323, in the final moments Griffin shares withhis father. Why do you think the author chose to bookend the novel with this stark imagery? How do these two incidents help to shape readers’ understanding of Griffin’s father?

4. The city of New York is arguably as significant a character as any other in The Gargoyle Hunters. How would you describe the New York of this era? How does Gill address the city’s crime while also imbuing the text with a sense of nostalgia for its former grittiness?

5. The relationship between father and son is a significant aspect of The Gargoyle Hunters. How would you describe Griffin’s relationship with his father at the beginning of the novel? How do their various quests to “liberate” architectural wonders bring them closer together? When does Griffin’s trust in his father begin to waver? How does he conquer the anxiety he feels toward his father’s illicit actions?

6. When does Griffin first “see” the beauty in New York’s crumbling façades for himself? Discuss his first attempt to liberate a piece of a building. What motivates him to do this? What was his emotional state during and after this experience? As the novel progresses, are his solo missions driven by necessity or compulsion?

7. How would you characterize Griffin’s mother? Her parenting methods? As the novel progresses, how does Griffin’s relationship with his mother evolve?

8. In chapter 6, Griffin’s mother recounts the incident in which her “charismatic, self-absorbed, keenly observant husband” (page 67) took their infant daughter to an abandoned building site in order to liberate one of his treasures. Discuss this scene. What does this anecdote reveal about Nick as a character? About his relationship with his wife? About his conception of parenting?

9. How would you characterize Griffin’s home life in the brownstone? Describe his interactions with the boarders who live there.

10. Discuss Griffin’s relationship with Dani. How does Gill capture the sense of headiness that accompanies young love? How does the theft of the Laing papers evolve from an innocent act into one with much greater import?

11. The New York of The Gargoyle Hunters is a dark, forbidding place. How does Gill create tension throughout the novel? How does he play upon his readers’ sense of discomfort or uneasiness?

12. The Gargoyle Hunters is a nuanced look at adolescence in all of its glory and tumult. Describe how Gill captures the excitement and the anxiety of these formative years. How does Griffin occupy the liminal space between child and adult? When does he begin to develop a sense of confidence in himself? When is he most unsure of his place in the world?

13. The arrests of Zev and Curtis change Griffin’s understanding of his father’s business. Discuss the scene in which he visits Curtis during the search for his father. What does he realize about the extent of his own problems in visiting Curtis and his family?

14. Griffin’s journey to New Jersey to find his father is rife with tension and uncertainty. Were you surprised by the reveal of his father’s location? How would you describe their final hours together? Discuss Griffin’s fear of lightning and the childhood memory he recounts about going to his father for comfort during a storm. What is the import of that scene? What does it tell us about the nature of their relationship?

15. Gentrification is a dominant topic of conversation in the twenty-first century. How does The Gargoyle Hunters explore the effects of gentrification? How would you characterize Griffin’s feelings toward gentrification at the novel’s conclusion?

16. In the final chapter of the book, Griffin includes New York City locations and businesses that will always belong to him and his wife—every one of which has vanished or changed form. What does the inclusion of these places assert about place and memory? If you are familiar with New York City, did you recognize any of these places, or have specific memories attached to them? If you aren’t, could you relate to the idea of a changing landscape in your own hometown?

By the Light of My Father’s Smile
Alice Walker

Love in the Time of Bertie
Alexander McCall Smith

Where She Has Gone
Nino Ricci

The Whole Story and Other Stories
Ali Smith

Moon and the Mars
Kia Corthron

Glimmer As You Can
Danielle Martin

The Devil in the Flesh
Raymond Radiguet

Lessons in Chemistry
Bonnie Garmus
Back to Top