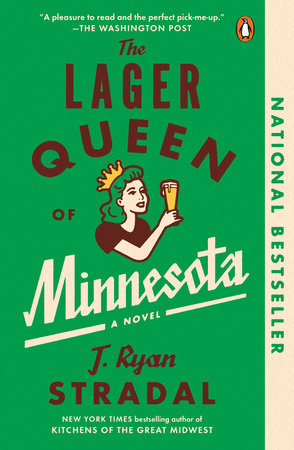 A Conversation with J. Ryan Stradal

How did the idea for The Lager Queen of Minnesota come to you? After the success of Kitchens of the Great Midwest, did you plan to continue to get inspiration from the food/drink world?

Before I was finished writing Kitchens of the Great Midwest, I’d become intrigued by the blossoming evolution of beer culture. No other food- or drink-related business industry I can think of has changed more in this century. While on my last book tour, I also kept noticing more and more independent breweries in the towns where I did events. One thing that struck me about most of these places was that, in spite of serving alcohol, they were true community gathering places, like the beer halls of Europe. More often than not, they were kid-friendly, pet-friendly, and/or venues for local musicians. In small towns, I’d also see young people, both at and behind the bar. At first, new breweries don’t usually sustain more than a handful of living-wage jobs, but it’s nice to see an industry of any size help retain and support young workers in a town that may otherwise lose them.

Also, unlike a lot of other food-related enterprises that emphasize the “local” and “craft” aspects of the foodie movement, beer is patently inclusive and affordable, and always has been. My characters are always cosmonauts of inquiry, and this time around, I was again compelled to create people who could help me learn more about something, and this time it had to be beer.

What kind of research did you do for your novel? Did anything surprising come up during your research?

I interviewed around three dozen brewers, brewery employees, beverage industry professionals, academics, and beer enthusiasts over the course of about three years, and visited countless breweries, sometimes querying the staff, sometimes silently taking it in. What surprised me the most wasn’t just the sheer number of new breweries and beer pubs, but their success rate. Smaller cities and towns seem willing and able to support local breweries, even if the beer being sold isn’t often similar to the lager the local customers grew up drinking. They’re all making something that you can’t exactly find anywhere else, and locals from all walks of life are helping sustain them. I love this.

What is it about the Midwest that continues to inspire your writing?

So much. It’s a complex place that defies easy categorization. My childhood and teenage years alone were so full of questions, contradictions, peculiar difficulties, and startling circumstances, I could write about the people that shaped me for the rest of my life and not cover a tenth of what inspires me about them.

Also, it’s not that some people on the coasts who write about Midwesterners get them wrong, per se, it’s just that they’re often reduced to stereotypes. I know how complex my family and friends in the Midwest are, and I try really hard to give my characters the sorts of problems that reveal a similar depth. This isn’t as easy as it sounds. I love my characters, and it breaks my heart to impose hardships on them.

What made you want to write about the business of beer from the female perspective? Was writing across multiple generations of women difficult?

One of the things I noticed while touring breweries was how often the staff, particularly the owners and brewmasters, looked like me—I met a ton of bearded white guys. This to me seemed like an incredibly boring story to tell. One of the imperatives of fiction, I believe, is to write the story you want to manifest, so I wrote about the kinds of brewers I’d like to have met more often.

Also, this story, like Kitchens of the Great Midwest, was written with one reader in mind—my mom. Although she passed away fifteen years ago and will never hold a book of mine in her hands, whenever I sit down to write, I do my best to evoke her and honor her. This often means female characters. Edith in particular has a heaping portion of my mom in her, and writing about her and for her keeps her alive in my heart.

How important is it to you to represent working-class families in your work?

One of the things I kept hearing on my book tour for Kitchens of the Great Midwest was how much my readers appreciated reading about working-class people. I hadn’t thought about it before, but it does seem like a lot of contemporary fiction is about rich or financially comfortable characters, and if the characters are poor, they’re often abjectly so. I was born into a struggling young working-class family—at one point when I was three, my parents had only $20 to their name—but they rebounded, each earned college degrees, they became homeowners, and were solidly middle-class by the time I was in high school.

I wanted to tell that story, both in terms of writing about people like my family and also about how, infused with hope and a lot of support, they improved their lives. They sure didn’t do it alone, and I’ve long wanted to write about people facing similar circumstances who ended up better than they started—and remained good people.

What do you find most interesting about contemporary “beer culture”?
Despite the dizzying and recondite terminology that attends any “craft” culture, beer has remained inclusive. I wish it were more diverse (it’s slowly becoming so) but one of the barriers to entry is that starting a successful brewery is still mostly a rich person’s game. Very few breweries I visited were honestly bootstrapped operations; it seems typical (and perhaps necessary in many areas) that at least one of a brewery’s principal founders has substantial capital. Even though it’s ultimately a low-margin business, the start-up costs are often prohibitive, and various blue laws add to this cost and complexity.

That said, unlike with, say, wine or whiskey, an average person in Minnesota can easily afford the highest-rated, best-reviewed beer sold in their market. Beer snobs may crow about the ineluctable characteristics of certain virtually inaccessible beers, but great beer is affordable and accessible for virtually every drinker who’s interested. That’s one of the biggest things I love about it.

Do you have any favorite beers or breweries?

I’m a huge fan of Three Weavers, in Inglewood, California—a brewery owned and operated by women. They were tremendously helpful to me in researching this book. I love Spiral Brewery in my hometown of Hastings, Minnesota—they were also incredibly helpful, and three of the five principals there are women, as well. I also love the hard cider from Sweetland Orchard in Webster, Minnesota. The owners, Gretchen and Mike, were also deeply generous and knowledgeable in regard to family-run operations, alcohol distribution, and state alcohol laws.

Among breweries I haven’t yet visited, I’m a fan of the beers from Russian River, Dogfish Head, and Bell’s, but frankly, there’s not much I dislike, besides wheat beers (personal preference, not a judgment call). When visiting a new brewery, I’m likely to try whatever they have that I’ve never seen anywhere else, and if nothing applies, I’ll order a Citra-hopped IPA, amber ale, cream ale, or stout, depending on whether and what I’m eating. Frankly, I’m over the moon at how easy it is to find good beer now, just about anywhere in America. I hope the beer drinkers of future generations sustain this and don’t take it for granted.

1. At the center of the story is a family divided over an unfairly split inheritance. How do you feel about how each sister reacted to their father’s decision? Did this situation evoke memories of lopsided inheritances or contested wills in your own family?

2. Helen instantly loves beer on her first taste and soon comes to the conclusion that she wants to be a brewer. How would you characterize her ambition? Does her relationship with Orval feel honest or calculated?

3. When we first meet Diana, she is stealing tools from garages and selling them on the internet to make money. In spite of this, how does she become a sympathetic character? What actions does she make that reveal her kindness and generosity?

4. Edith likes to think of herself as a simple person—or does she? In what ways is she actually quite complicated? How does she reveal herself to be as calculating or focused as Helen?

6. What do you think of the “education” Frank Schabert gives Diana about brewing? Do you agree with his methods?

7. Each of the sisters experience the loss of a beloved husband. How are they different in how they express their grief? How are they similar?

8. The relationships within the book, as in life, necessarily evolve and adapt as time passes. How do you feel about Diana and Clarissa’s friendship, and the reasons they grew apart?

9. If there was one more chapter after the final scene, what do you imagine might happen?

10. Who do you feel is the “lager queen of Minnesota,” if anyone?