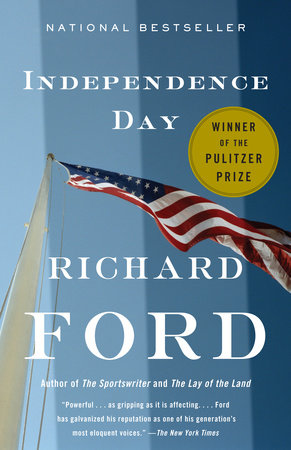 The questions, discussion topics, suggested reading list, and author biography that follow are intended to enhance your group’s reading and discussion of Richard Ford’s Pulitzer Prize-winning Independence Day. We hope they will aid your understanding of a novel that is at once casual and lyric, hilarious and poignant, irreverent and inspiring. Like its ordinary (and extraordinary) hero, Independence Day is not always what it seems— though its themes ring as clear as the carillon that wakes the opening day. A narrative celebration of the "hum of the human spirit," illuminated by tacit affirmation of the faith of mankind, this novel is as "bright and chancy" a spectacle as the Fourth of July festivities it portrays.

Frank Bascombe, who made his first appearance in Ford’s 1986 novel The Sportswriter, continues his narrative five years later. Frank– now forty-four, divorced, "residential specialist," former sportswriter, parent, Democrat, and occasional Presbyterian with a fear of "disappearing"– finds his life at a "turning or at least a curving point" on the Fourth of July weekend, 1988. After showing clients their forty-sixth potential home and passing an intimate, though problematic, evening with his lady friend at her beach house, he travels from Haddam, New Jersey, to Deep River, Connecticut, home of his remarried former wife. Here he collects his troubled teenage son, Paul, for a weekend trip to several sports halls of fame. Their journey– a passage through choices, reflections, and regrets– is transformed in one lightning-bolt moment alongside a peaceful baseball field. Helped by a solicitous stranger, Frank and his son are carried across their own spiritual deep river to a fresh start on the other side. As Everyman, Frank Bascombe is a symbol of redemption and possibility– a source of hope for all.

1. You may have laughed out loud while reading Independence Day. Possibly the novel’s serious purpose came as a surprise. What is the temper of Frank Bascombe’s interior monologue as opposed to that of the novel’s themes? How is Ford’s pervasive use of humor integral to his development of plot and theme?

2. Haddam, New Jersey, is introduced as idyllic, but reality soon counters the idyll. How does Independence Day1s catalog of past and present Americana juxtapose the ideal and the real? Does the novel express the American character?

4. Frank labels Ann a "bedrock literalist" [p. 103]. Sally, he says, lives "a life played out in the foreground" [p. 153]. Does he perceive these women fairly? Are they alike? Unlike? Do they understand him?

5. How would you answer Paul when he says, "Don’t you really think something’s wrong with me" [p. 328]? How does his accidental "detachment" [p. 374] describe his problem? Is Clarissa also affected by the divorce? How does the novel mourn the loss of the nuclear family?

6. When Frank met Karl Bemish along the road, he decided to help him. What American characteristics does this "old nostalgian" [p. 136] typify? What does the rescue and rehabilitation of the hot dog stand signify?

7. The Markhams suffer from regret, indecision, inability to act, isolation, and a "current predicament of homelessness" [p. 55]. Should they be content at 212 Charity with a prison beyond the backyard fence? Should they stay permanently in a motel? Will they find solace in Frank’s "colored rental" [p. 406]? Are they "out-of-the-ordinary white folks" [p. 423] in their racial outlook? How representative of Americans are they?

8. Of what narrative and thematic significance is the murder at the Sea Breeze Motel? Why are Frank and Tanks "unable to strike a spark" [p. 216]? What is the cause, and function, of Frank’s remorse at the end of Chapter 6? Do you think the weekend journey has both literal and symbolic levels?

9. Which dictionary definition of "sanctuary" would you apply to the Deep River Bird Sanctuary: shrine, refuge, or protection? How else does the novel examine these forms of sanctuary?

10. "Do you believe in progress, Bascombe?" [p. 113] asks old man Schwindell. How does Frank come to define "progress?" Do the weekend’s events chronicle Frank’s spiritual growth as a kind of "progress"? What stages does he pass through from Haddam to Cooperstown?

11. What does the Baseball Hall of Fame represent to America and to Independence Day? How is Cooperstown a "replica" [p. 293]? What is Frank’s objection to simulation?

12. Irv appears out of the blue when Paul is struck. Who is Irv? How does he minister to Frank? What problem does he express when he says, "I feel like some bad feeling is sort of eating away at me on the edges" [p. 389]? How do people like Irv fare in today’s world? Does the photo in his "tiny wafer wallet" [p. 391] sanctify family? Does Frank accept Irv’s invitation to return to family status? When Ann and Irv mouth "hope" together [p. 402], is Frank’s spiritual journey advanced?

13. How is Paul’s accident a catalyst for change? Is change "conversion"? How does Paul’s eye injury alter Frank’s vision? Consider "blindness" as metaphor. What vision does the author seek to restore?

14. Frank’s imaginary syllabus topic, "Reconciling Past and Present: From Fragmentation to Unity and Independence" [p.259], might describe the trip’s (and the novel’s) goal and result. Is reconciliation accomplished?

15. "I don’t believe in God" [p. 432], Frank insists. Does this mesh with the Christian tone of his thinking, his journey, and the novel? Karl answers, "You seem one way and are another." In what way does Ford similarly craft both character and novel?

16. Real estate is a central metaphor in Independence Day. Who are the metaphorical tenants and landlord? Is any form of shelter not described? Which characters seek shelter? Is it structure or solace? Does Frank really believe "place means nothing" [p. 152]? Which of the novel’s many "mansions" does Ford recommend? What is suggested by Frank’s comment: "What more can you do for wayward strangers than to shelter them" [p. 424]? Frank’s former mansion is now an Ecumenical Center. In what sense is the novel also ecumenical?

17. Consider definitions of "independence." Is there irony in being "free to make new mistakes" [p. 60]? What does Independence Day really mean for Frank?

18. At novel’s end, Frank says to an unidentifed phone caller, "Let me hear your thinking" [p. 451]. Does it matter who the caller is? What might Frank’s response indicate about his thinking?

19. In 1776, John Adams wrote of Independence Day, "It ought to be solemnized with pomp and parade, with shows, games, sports, guns, bells, bonfires, and illuminations, from one end of this continent to the other…" How does Ford’s novel meet all of Adams’s requirements? With its varied allusions to light, what source of "illumination" does Independence Day offer to modern America?

Richard Ford was born in Jackson, Mississippi, in 1944, the only child of a traveling salesman for a starch company, and was raised in Mississippi and in Arkansas. He went to college at Michigan State University, where he met Kristina Hensley, to whom he has been married since 1968. Ford attended law school very briefly before entering the University of California at Irvine, where he received his M.F.A. in writing in 1970.

After publishing two novels, A Piece of My Heart (1976) and The Ultimate Good Luck (1981), Ford took a job writing for Inside Sports magazine. When the magazine was sold, he decided to write a book about a sportswriter; the resulting novel, published in 1986, received widespread acclaim: it was named one of five best books of 1986 by Time magazine. The Sportswriter was followed by Rock Springs (1987), a highly praised book of short stories, and in 1990 by a novel set in Great Falls, Montana, called Wildlife. His most recent novel, Independence Day, won the Pulitzer Prize and the PEN/Faulkner Award for fiction, the first novel ever to win both awards.

In addition to his steady production of fiction, Ford has also taught writing and literature at the University of Michigan at Ann Arbor, at Princeton University, and at Williams College.

Ford lives in New Orleans, Louisiana, where his wife, Kristina, is the head of the city planning commission. He travels frequently and also spends time on a plantation in the Mississippi Delta and at his cabin in Chinook, Montana.
Learn More About Independence Day
print

The Fortress of Solitude
Jonathan Lethem

The Weight of this World
David Joy