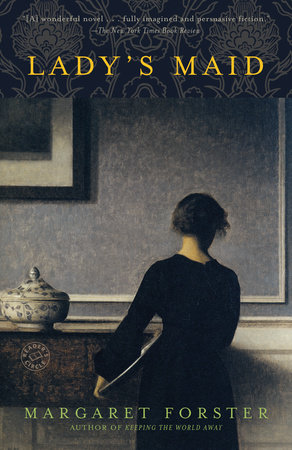 1. Did you find Wilson a sympathetic, likeable character? Why or why not?

2. Early on in their relationship, Elizabeth tells Wilson that she would like the two of them to be friends. Do you think they in fact develop a friendship over the course of their years together, or would you describe their personal relationship in a different way?

3. This novel has much to say about the relationship between the upper and lower classes in Victorian England. Would you say the author is more sympathetic to the gentry or the servants in this story? Can you recall any specific ways in which she shows her sympathies?

4. The author describes here the relationship between Wilson and Mrs. Browning: “Without [Wilson] wishing it to be so, it seemed in the nature of things for her always to seek favor and her mistress to bestow it. Always…she was the supplicant…” Why do you think this is so? Would you call Wilson a subservient woman by nature, or do you think she behaves that way only in order to succeed in her job and her place in society?

5. Why do you think Wilson ended up marrying an illiterate man with little ambition rather than one of her previous suitors who seemed more likely to advance his station in life?

6. The relationship between Wilson and Elizabeth is a very intense one, subject to continual warmings and coolings, hurts and emotional reunions. Why do you think these two women are so important to each other and form such a deep connection?

7. What opinion do you have of Robert Browning as the author has portrayed him? Do you find him a sympathetic and loving husband? A caring father? Does he seem self-centered, or just a typical man of his era?

8. Wilson’s son Oreste spends years living with her sister. In your opinion was this the best solution available, given Wilson’s situation, or do you think she could have had him live with her if she’d really wanted to?

9. Why do you think Elizabeth’s father totally cuts her off when she leaves home, in spite of the fact that she marries immediately to a perfectly respectable Englishman?

10. Margaret Forster got the impulse to write about Wilson after completing a biography of Elizabeth Barrett Browning, saying that when she’d finished it, that she still wasn’t finished with Wilson. She said she was haunted by it, and felt the need to further explore this maid and close companion to the poet. Why do you think Forster was so intrigued by Wilson? Do you find her intriguing? Do you think she is a predictable character or a contradictory, surprising one?

11. Why do you think Elizabeth B. Browning was so passionately interested in the Italian war news and Wilson was so very uninterested?

13. Lady’s Maid is set between the years of 1844 and 1861. Did you feel much sense of the events going on in the larger world outside the novel?

Learn More About Lady’s Maid
print
Back to Top