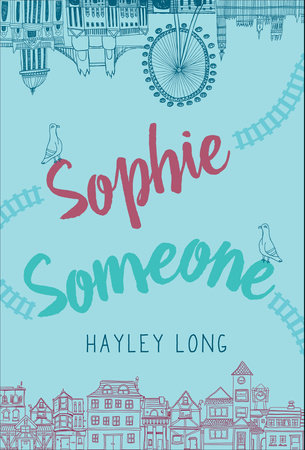 What if you found out your life has been threaded with secrets — ones that rocked you to your core? An affecting page-turner written in a brave, memorable language all its own.

Some words are hard to get out of your mouth. Because they spell out secrets that are too huge to be spoken out loud. But if you bottle them up, you might burst. So here’s my story. Told the only way I dare tell it.

Sophie Nieuwenleven is sort of English and sort of Belgian. She and her family came to live in Belgium when she was only four or five, but she’s fourteen now and has never been sure why they left England in the first place. She loves her international school, adores her friend Comet, and is protective of her little brother, Hercule. But it’s hard to feel carefree when her mom never leaves the apartment — ordering groceries online and blasting music in her room — and her dad has a dead-end job as a car mechanic. Then one day Sophie makes a startling discovery, a discovery that unlocks the mystery of who she really is. This is a novel about identity and confusion and about feeling so utterly freaked out that you can’t put it into words. But it’s also about hope. And trust. And the belief that, somehow, everything will be OK. Sophie Someone is a tale of good intentions, bad choices, and betrayal — and ultimately, a compelling story of forgiveness.

Sophie and her circle of family and friends are sympathetic and appealing in all their flawed humanity. Her peculiar way of speech soon reads as clearly as plain English and perfectly mirrors her internal turmoil as she navigates her parents’ shift from just mambo and don to people with a past she never imagined—which, to some extent, is a transformation every young person will understand. A creative and memorable story about secrets, lies, and moving on.
—Kirkus Reviews (starred review)

Long weaves an inventively written and entrancing story filled with good intentions, poor decisions, meaningful friendships, and complicated but loving family relationships. It takes something of a leap of faith on the reader’s part, as Sophie’s peculiar writing style seems somewhat nonsensical at first glance; however, those who persevere will quickly understand her true meanings. The result is an original narrative that zigs and zags in inspired ways, with a sympathetic heroine leading the way.
—Booklist (starred review)

Long (Being a Girl) creates intrigue as she plays with themes of language and communication…Readers who embrace Sophie’s eccentric narrative will be rewarded with revelations about the cost of deceit and the healing power of honesty.
—Publishers Weekly

Sophie’s a brilliant main character, able to spot her own weaknesses with the same honesty that she does those of others…Creative teens may happily try their own hand at telling autobiographies using a similar linguistic approach.
—Bulletin of the Center for Children’s Books

The plot moves quickly, though, and once they get used to Sophie’s “code speak,” even reluctant readers will find it satisfying. Teens will relate to Sophie’s challenges as she struggles to learn who she really is. For readers who have graduated from Roald Dahl’s Matilda and Susan Patron’s The Higher Power of Lucky, this charming title will be a fast favorite.
—School Library Journal