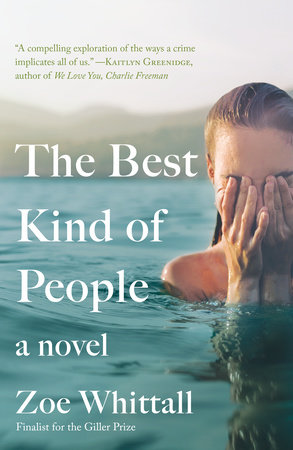 1. The book opens with a gunman walking the halls of the prep school. Why does the author choose to begin with this incident, which occurs several years before the main action of the rest of the plot? How does this framing shape your interpretation of the events to come?

2. As readers, we learn from the back cover’s plot summary that George Woodbury is arrested for sexual misconduct. How is the novel’s suspense created and maintained? Is George’s guilt or innocence the main question we want answered, or are there more complex psychological stakes for us as readers?

3. Who are the victims in the Woodbury case? In what ways is their credibility called into question before the trial even begins?

4. The second of the book’s epigraphs is about rape culture—-the social forces that conspire to make the public side with the person accused of a sexual assault, rather than with the victim. Who sides with the accused in the George Woodbury case? How do they justify their allegiance to him?

5. The Woodburys hold a unique social class position: in one sense they are old money as they have inherited a longstanding family fortune, but George is a teacher and Joan is a nurse. How does this mix of class affiliations affect how the Woodburys are treated by the criminal justice system—-and by their peers—-throughout the arrest and the events that follow?

6. When Andrew wakes up in his hometown, he feels a “heavy presence on his chest.” What is this weight that settles on him, back in Woodbury Lake? Has it lessened in his adulthood, or does he just relate to it differently?

7. How does the case against her father affect Sadie’s personality and values? What does her attachment to the koala bear eraser tell us about the continuities in her character?

8. How long does it take each family member to reconsider George’s innocence? What factors, both personal and social, shape their beliefs about the charges he faces?

9. Joan feels ashamed when a TV station plays footage from back when George stopped the gunman at Avalon Hills. “It was instinct,” George says in that clip. Why does this scene suddenly seem “monstrous and humiliating” to Joan? What does her response to the clip tell us about her changing view of her husband?

10. Joan enters a support group for family members of people accused of sexual violence. Why does she initially have trouble fitting in to the group and why does she continue to attend? Is the group meaningful for her?

11. Novels about crimes often take a forensic approach to the details of what happened (reporting on evidence, slowly revealing the facts); however, in The Best Kind of People, details of the crime itself are peripheral. What is the main focus of the narrative? Why do you think the author chose this focus?

12. Kevin, an opportunistic writer, uses the Woodbury case as the basis for his new novel. In doing so he provides the reader with a main account of the case details. Why might Whittall have chosen to explore the actual crime as a story within a story?

13. The novel is written from the point of view of many characters: Sadie’s, Joan’s, and Andrew Woodbury’s
perspectives predominate, but other views appear, too. Conspicuously absent is George Woodbury’s account. Why might the author have chosen to stay outside George’s world? How might the book be different if it contained George’s point of view?

14. The book’s epilogue details the fallout from the case and reveals Joan’s final decision about her husband. Why do you think she makes the choice she does? What does this story suggest to us about the long–term consequences of sexual assault cases for victims, family members, and the accused?

Learn More About The Best Kind of People
print