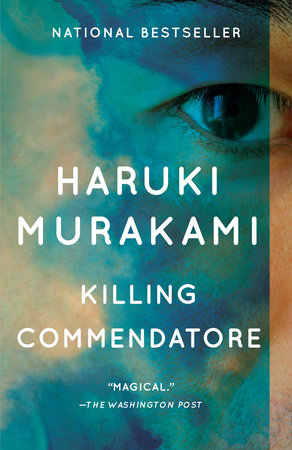 The questions, discussion topics, and other material that follow are intended to enhance your group’s conversation of Killing Commendatore, the epic new novel from the internationally acclaimed and best-selling author of 1Q84 and Colorless Tsukuru Tazaki and His Years of Pilgrimage.

1. As a painter, the narrator might be expected to have an increased sense of awareness and perceptivity. Yet more than once in the book it’s implied that he himself is more the subject of his portraits than the subjects are. Keeping in mind the fantastical element of the Commendatore coming to life, who would you say has the most control in this novel: the subject, the artist, or the audience (the one who owns the work)? Contrast the agency of the Commendatore (an “Idea”) with the Man in the White Subaru Forester and Mariye (whose painting goes unfinished).

2. Discuss the role of art in the novel—not just painting but also music, such as opera, jazz, and Bruce Springsteen. Consider what the Commendatore says of Thelonius Monk: “What is important is not creating something out of nothing. What my friends need to do is discover the right thing from what is already there” (260). What does painting Mariye help each of them discover about something “already there”?

3. The narrator admits that he “prioritized the ego of the artist—myself—over you, the subject” in his painting of Menshiki (214). To his surprise, Menshiki still loves the painting. What does this tell you about Menshiki’s self-awareness and interdependence on others? How do his behaviors support this idea?

4. Menshiki’s choice to live across the water from his daughter alludes to The Great Gatsby—although this relationship is familial rather than romantic love. If you’ve read The Great Gatsby, in what other ways is that novel echoed in Killing Commendatore? In what ways are the two books similar and different?

5. Komi’s death had a profound impact on the narrator. How has losing her shaped him as a person? What is Komi’s role in the novel? What are some of the connections between Komi and the other women in the narrator’s life—Yuzu, Mariye, his girlfriend, and Muro? What does each of them possess that attracts him to them, including any artistic appeal? What is suggested by the way he responds to losing (or almost losing) them?

6. Discuss Masahiko’s revelation that people’s faces—and perhaps personalities—are not symmetrical. How does this inform the way that portraits are made in the book and the role of Long Face?

7. What is Tomohiko Amada’s role in the novel? Why is the narrator so determined to learn about Amada’s secret past? What does he discover?

8. What other kinds of asymmetries appear in the novel? Consider the juxtaposition of real and fantastical elements in addition to (mis)matches in people, time, and place.

9. Consider the role of obsession in the book. Which characters are more readily drawn into obsessive states of mind? What do they obsess about? How do they act on these feelings? For example, compare the narrator’s obsession with the pit in the woods (and painting it) with Menshiki’s obsession with Mariye.

10. Why does the narrator need to stab the Commendatore? Is their relationship just an expression of the notion that art and life reflect each other, or is it something more complicated? What kind of agency does he gain from doing so?

11. Consider the narrator’s journey along the Path of Metaphor. What does he experience along the way? Why does he embark on this quest and how does it change him?

12. The scene describing Mariye’s hiding in Menhiki’s house hands over some of the storytelling agency to her—the only time the narrator, and his mind, isn’t fully in control of the story. What does this slip into Mariye’s perspective indicate about her relationship with the narrator? Consider how closely he relates her to his younger sister and the need to protect her even from Menshiki himself.

13. Is the novel a love story? How might it meet the traditional definition of “love story,” and how does it complicate the notion of love?

14. Why does the narrator get back together with his wife? Do you believe that he could really be Muro’s father?Why or why not?

15. How does the narrator come to realize the boundaries of his own knowledge vis-à-vis Mariye’s portrait and his wife’s child? In his interpretation, is not knowing a fault or a benefit?

16. Describe the nature of reality in this novel. Where do the boundaries fall between dream and waking states, conscious and unconscious actions, and truth versus fantasy? Did the time you spent in the world of this book have an impact on your worldview once you finished?

17. Have you read any other books by Murakami? How were they similar to this novel? How were they different? Are there common themes that tie them together?

Learn More About Killing Commendatore
print
Back to Top