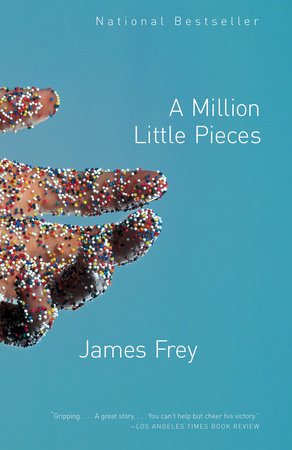 "The most lacerating tale of drug addiction since William S. Burroughs’ Junky." —The Boston Globe

The introduction, discussion questions, suggestions for further reading, and author biography that follow are designed to enhance your group’s discussion of A Million Little Pieces, James Frey’s furious and inspired memoir of addiction and recovery.

James Frey wakes up with a broken nose, missing teeth, a hole in his cheek, and eyes so swollen he can hardly open them. His clothes are "covered with a colorful mixture of spit, snot, urine, vomit and blood" [p. 1]. He’s on a plane, but he does not know where he’s going or where he’s come from. And now his life is about to get really difficult.

A Million Little Pieces is James Frey’s scorching account of his descent into the hell of addiction and the brutal journey to recovery. When he arrives at a famous clinic in Minnesota, he is nearly dead from a decade of drug and alcohol abuse so spectacular even doctors who have spent their entire careers treating addicts are amazed. He took everything he could find, and as much as possible: Cocaine, crack cocaine, crystal meth, PCP, glue, and alcohol in quantities so great he blacked out every day for years. His body is shot, and his mind is in an almost constant rage of self-hatred and destructiveness. He is wanted in three states for crimes ranging from DUI and resisting arrest to assaulting an officer, attempted incitement of a riot, and felony mayhem. He has, as they say, hit bottom. A few more drinks, the doctors tell him, will kill him.

His ordeal inside the clinic is hardly less harrowing. Balancing on the razor’s edge between hope and despair, Frey describes the writhing delusions of withdrawal, the constant need of addictions screaming to be fed, and the blinding Fury that overtakes him and makes him want to run. That he completely rejects the clinic’s Twelve Steps program makes his recovery seem even less likely. But he meets a fellow patient, Leonard, who will not give up on him, his brother gives him a copy of the Tao Te Ching, which speaks to him more profoundly than anything he reads in the AA literature, and he falls in love with Lilly, a beautiful and doomed crack addict. In them he finds reasons to try to heal himself. And he insists, in a gesture either heroic or just plain stubborn, that whatever the sources of his addictions might be, he will place the responsibility for his life and its disasters, the pain he’s caused himself and others, squarely on his own shoulders. He will stay sober not by attending AA meetings in church basements, or praying to a god he can’t believe in, but by deciding not to act on his addictions. A recipe for failure, his counselors tell him, but a risk he decides he has to take.

In writing that jumps off the page with all the rawness and immediacy of life, A Million Little Pieces is an unforgettable act of self-witnessing and a terrifying account of what the human spirit can destroy, endure, and overcome.

1. A Million Little Pieces presents some unusual formal innovations: Instead of using quotation marks, each piece of dialogue is set off on its own line with only occasional authorial indications of who is speaking; paragraphs are not indented; sentences sometimes run together without punctuation; and many passages read more like poetry than prose. How do these innovations affect the pace of the writing? How do they contribute to the book’s rawness and immediacy? How is James Frey’s unconventional style appropriate for this story?

2. A Million Little Pieces is a nonfiction memoir, but does it also read like a novel? How does Frey create suspense and sustain narrative tension throughout? What major questions are raised and left unresolved until the end of the book? Is this way of writing about addiction more powerful than an objective study might be?

3. Why does the Tao Te Ching speak to James so powerfully? Why does he connect with it whereas the Bible and Twelve Steps literature leave him cold? How is this little book of ancient Chinese wisdom relevant to the issues an addict must face?

4. James is frequently torn between wanting to look into his own eyes to see himself completely and being afraid of what he might find: "I want to look beneath the surface of the pale green and see what’s inside of me, what’s within me, what I’m hiding. I start to look up but I turn away. I try to force myself but I can’t" [p. 32]. Why can’t James look himself in the eye? Why is it important that he do so? What finally enables him to see himself?

5. When his brother Bob tells James he has to get better, James replies, "I don’t know what happened or how I ever ended up like this, but I did, and I’ve got some huge fucking problems and I don’t know if they’re fixable. I don’t know if I’m fixable" [p. 131]. Does the book ever fully reveal the causes of James’s addictions? How and why do you think he ended up "like this"?

6. Why are James and Lilly so drawn to each other? In what way is their openness with each other significant for their recovery?

7. Joanne calls James the most stubborn person she has ever met. At what moments in the book does that stubbornness reveal itself most strongly? How does being stubborn help James? How does it hurt or hinder him?

8. The counselors at the clinic insist that the Twelve Steps program is the only way addicts can stay sober. What are James’s reasons for rejecting it? Are they reasons that might be applicable to others or are they only relevant to James’s own personality and circumstances? Is he right in thinking that a lifetime of "sitting in Church basements listening to People whine and bitch and complain" is nothing more than "the replacement of one addiction with another" [p. 223]?

9. What are the sources of James’s rage and self-hatred? How do these feelings affect his addictions? How does James use physical pain as an outlet for his fury?

10. How is Frey able to make the life of an addict so viscerally and vividly real? Which passages in the book most powerfully evoke what it’s like to be an addict? Why is it important, for the overall impact of the book, that Frey accurately convey these feelings?

11. When Miles asks James for something that might help him, James thinks it’s funny that a Federal Judge is asking him for advice, to which Miles replies: "We are all the same in here. Judge or Criminal, Bourbon Drinker or Crackhead" [p. 271]. How does being a recovering addict in the clinic negate social and moral differences? In what emotional and practical ways are the friendships James develops, especially with Miles and Leonard, crucial to his recovery?

12. James refuses to see himself as a victim; or to blame his parents, his genes, his environment, or even the severe physical and emotional pain he suffered as a child from untreated ear infections for his addictions and destructive behavior. He blames only himself for what has happened in his life. What cultural currents does this position swim against? How does taking full responsibility for his actions help James? How might finding someone else to blame have held him back?

13. Bret Easton Ellis, in describing A Million Little Pieces, commented, "Beneath the brutality of James Frey’s painful process, there are simple gestures of kindness that will reduce even the most jaded to tears." What are some of those moments of kindness and compassion and genuine human connection that make the book so moving? Why do these moments have such emotional power?

14. In what ways does A Million Little Pieces illuminate the problem of alcohol and drug addiction in the United States today? What does Frey’s intensely personal voice add to the national debate about this issue?

James Frey is originally from Cleveland. He is married and lives in New York.

The Unwinding of the Miracle
Julie Yip-Williams

The Facts of Life
Willie Nelson

Under Our Roof
Harry Cunnane and Madeleine Dean

And I Don’t Want to Live This Life
Deborah Spungen

To Selena, with Love
Chris Perez

Midnight in Washington
Adam Schiff
Back to Top