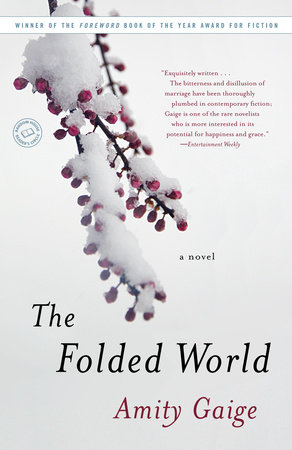 1. Which of the characters in The Folded World do you most relate to? How and why?

3. Charlie Shade lost his job, nearly lost his family, and almost himself trying to be all things to Opal – to help her. Yet when Opal sees him as she’s flying over the earth at the end of the book she says "He looked nice enough from up here, but down there he was somehow horrifying." What does she mean by this? What about him is "horrifying"?

5. At Charlie’s birth, his grandmother had a premonition about his death. Her other premonitions had all come to pass. Why didn’t the one about Charlie? Or did it?

6. Many of the characters in The Folded World are mentally ill, but others are eccentric, or lost. What do you think The Folded World says about mental illness? What is the fine line that separates the sane from the insane?

7. When Charlie decides to train in social work, he does so because he wants to find the "seam" between his life and others, the place where lives "touch" each other. Is this impulse to find this place a good and noble impulse? What exactly leads him astray from his original intention to help people?

8. Alice is a bookworm. She reads so much she hesitates to make real contacts. At one point, she fears that she believes real people are "less real than people in books." What are the pitfalls of being a bookworm? Is it true that sometimes characters in books seem "more real" than real people? How or why?

9. Why doesn’t Alice go to college, the first time when she graduates high school, and the second time when she has another chance after signing up for night classes?

10. At one point, Charlie has the thought that Alice is "spiritually larger" than he somehow. Do you agree? And why are the spirits of each character limited? Which character in the book is spiritually the largest? The smallest?

11. Hal and Opal are both diagnosed with mental illness, and spend time in psychiatric hospitals-the same one, in fact. Both their lives are damaged by the illness, and yet Hal, at the end of the book, seems to have made some type of recovery. Opal, of course, does not. Why do you think their lives end so differently? Why do some mentally ill people flourish despite their illness and some do not?

12. Discuss the italicized sections in the book. Are they literally spoken by Charlie to Alice? Or are they some other form of storytelling?

13. In Part Two, when Charlie is reflecting on his satisfying life as a father and now a mobile clinician, he wonders if, after a life of successes, he can ever truly understand what it means to suffer. Do you agree? Do you think a person needs to suffer himself to understand another person’s suffering? Why or why not?

14. Discuss the concept of "the folded world." What is it, and why is it the title of this book? When Hal becomes attracted to Alice in Part Two, he fears that his folded world might disappear, "For in its unfolding, it was no longer a world." Do you agree that this is a predicament in loving someone else?

Shrines of Gaiety
Kate Atkinson
Back to Top