A Handbook to Luck Reader’s Guide 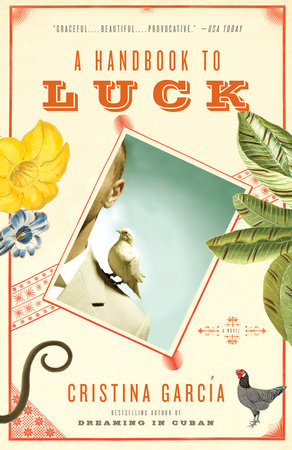 A Handbook to Luck Reader’s Guide

The introduction, discussion questions, and suggestions for further reading that follow are designed to enliven your group’s discussion of Cristina García’s bittersweet, multilayered new novel, A Handbook to Luck. Spanning three countries and two decades, the book tells the story of three lives whose serendipitous intertwining may testify to the sheer randomness of the universe or to some underlying pattern that might be called probability or fate or maybe luck, the thing gamblers pray to. Alongside its accounts of love and parting, exile and homecoming, crushing self-sacrifice and sudden, unexpected joy, the novel contains a floating symposium on the nature of luck—its relation to skill and virtue, whether it can be controlled or at least helped along; whether it is stronger than human self-destructiveness and stupidity, and whether we make it or it makes us.

In the late 1960s, Enrique Florit is a dutiful boy living in Southern California with his father, a flamboyant magician who, when he isn’t chasing down a career break or a pair of shapely legs, is pining for their native Cuba and the young wife who died bizarrely during their act. Marta Claros is a ragged girl peddling used clothing in the streets of San Salvador, having dropped out of school to help her mother and the brother she adores. In Tehran, Leila Rezvani is getting ready to begin her studies at an exclusive Swiss boarding school, in accordance to her mother’s plans for her entry into the upper tiers of Iranian society. Those plans also include having her nose fixed by an equally exclusive plastic surgeon.

In the years to come, Enrique will discover an aptitude for math that could have earned him a place at any college he wanted. Instead, he will use his gift to pay off his father’s gambling debts. He will be offered a chance at love but prove too fearful to seize it, contenting himself with a tattoo in Persian script and a decade of wistful fantasies. As San Salvador slides down the chute of state terror and civil war, Marta literally shoots her way out of a bad marriage, then joins the tide of refugees heading for the U.S., where she goes from working on a sweatshop floor to marrying her boss. She, too, will be granted an unexpected chance at happiness—and grab hold of it with all her might. Leila will gain a brief, intoxicating taste of freedom through Enrique and then soberly return to Iran—which has traded the corrupt dictatorship of the Shah for the austere one of the ayatollahs—and a loveless union with a man from her class.

Dizzyingly eventful, electric with feeling, and bursting with the vitality of its characters, A Handbook to Luck is a magnificent novel that will be read—and talked about—for a long time to come. This guide will help you get started.

1. How does Garcia distinguish her novel’s settings and locate the reader in them? What details characterize Enrique’s Las Vegas, Marta’s San Salvador, and Leila’s Tehran? In what ways are the characters matched to their settings? Las Vegas, for example, is the logical destination for someone like Fernando, but how does growing up there shape his son? How does life on the streets of San Salvador prepare Marta for her future? In what ways does Leila remain figuratively trapped in the garden where we first see her?

2. Along with the details that set the novel’s respective worlds apart, there are some that occur in all of them: moths, for instance. Note the ways that moths appear in the three stories. Is this simply coincidence, or might Garcia be sending a signal to the reader, and what might that signal be? What other images and motifs figure in all three narratives, and to what effect?

3. Compare the ways the three protagonists spend their thirteenth birthdays. What is the effect of these parallel scenes? Where else in the novel does Garcia show her characters unknowingly doing the same thing—or experiencing the same milestone—at the same time? How does such synchronicity function structurally within the novel, and how does it reinforce the theme of luck?

4. Almost everyone in A Handbook to Luck is an immigrant of one kind or another: Enrique and his father from Cuba, Marta from El Salvador, and Leila, briefly, from Iran. Discuss the theme of immigration in the novel. What motivates García’s characters to leave their native countries? In what ways do they remain attached to them? What regrets do they have about leaving? Which of them adapts successfully to life in the U.S. and which of them fails, and for what reasons? On the basis of their experience, what qualities might be essential for an immigrant?

5. Even as a child, Enrique is conscious of his responsibility to the adults in his life, both to his childlike father and his dead mother, whom he is fearful of forgetting. How do these loyalties shape the rest of his life? Which of the other characters has a similar loyalty, and what are its results? How does the old-world value of loyalty equip them for survival in the more fluid, atomized society of the U.S.?

6. What is the significance of Fernando Florit’s profession? Discuss the connotations of magic as art form, as performance, as fraud, and as a genuine commerce in mystery. At what points in the book is Fernando merely a talented entertainer, and at what points do his tricks seem truly inexplicable? What significance do you see in the manner of his death, following a “death-defying” feat—catching a bullet in his teeth—that he has performed dozens of times before but that for once is actually deadly? In what ways does Fernando’s death echo that of his wife many years before? Do you have any speculations about the identity of the strange intruder who appears at his funeral?

7. Although his father grooms him to become his assistant, Enrique eschews magic for mathematics, which he later applies at the card table. How is gambling related to magic? Enrique views his success at poker as a product of skill. “Gambling is a branch of mathematics,” he tells Leila [p. 114]. But he’s also haunted by “how the slightest mistake could kill a person. A wrong turn here, a misspoken word there, and boom—your luck ran out. Fortune wasn’t something you could hold tightly in your hand like a coin” [p. 71]. Which view of luck is borne out by subsequent events in his life? By the lives of the other characters? What do you make of the fact that Leila refuses to elope with Enrique because “the odds of them lasting weren’t good” [p. 165]?

8. As a young girl, Marta Claros longs to read for the sheer pleasure of stories. As a young woman, she yearns for a baby. To what extent do these desires inform the choices she makes later in life? In what ways do they seem connected to things she doesn’t choose—that is, to things that just happen to her? Are the novel’s other characters driven by similar desires? To what extent do they “make their fortunes,” go out and get what they want? To what extent are they beneficiaries of luck or, alternatively, its victims?

9. Discuss Marta’s relationship with her brother Evaristo. What might be the significance of his decision to live in a tree? Is his increasing madness simply an illness or perhaps a logical consequence of witnessing the brutality of life in his country? Might it also be a strategy for surviving it? What might be the point of Evaristo’s internal monologues? How might they complement or complete the other narratives? What is the possible significance of his repeated references to birds and the color blue?

10. In what ways does Leila’s relationship with her brother parallel Marta’s with Evaristo? Although in future years she never seems to think about the incident in Hosein’s bedroom, might it cast a shadow over her life? How does her relationship with her mother and father mirror themes in Enrique’s and Marta’s narratives? What role does her class play in her life’s subsequent pattern? In what ways does Leila’s fate recall the stories Marta watches on the soap opera Pobre Gente, whose characters aren’t poor but “rich people whom you grew to feel sorry for because they were always so unhappy” [p. 197]?

11. Of all the characters in this novel, Marta may travel the farthest from her origins, but by its end Leila seems the most transformed in terms of character, having gone from a lively, free-spirited young woman to a cowed and prematurely aged prisoner of an abusive husband and a soul-crushing regime. What do you think accounts for her transformation?

12. In what ways is A Handbook to Luck a novel about history, as any novel about immigrants must be? To what extent are its characters’ lives historically determined? Note that history seems most insistent in the book’s foreign scenes-in Cuba, El Salvador, and Iran. Is one implication of this that America is a place exempt from history? How does history intrude into the novel’s American sections as well?

13. As she prepares to have her son sworn in as a citizen of the United States, Marta imagines the two of them shouting, “We belong here!” [p. 240]. What does it mean to belong in this novel—to a place, to a family, to oneself? Is belonging always something desirable, since for some characters it means self-denial and imprisonment? How does Garcia suggest that belonging can be reconciled with freedom?

14. What is the possible significance of the novel’s penultimate scene, the near-drowning of Marta’s son. What earlier scenes does it recall? And why does Marta, who has always had trouble with swimming lessons, plunge into the water and command José Antonio, “Watch me”?

Cristina García was born in Havana and grew up in New York City. She is the author of three previous novels and editor of two anthologies. Her novel Dreaming in Cuban was nominated for a National Book Award. She has been a Guggenheim Fellow, a Hodder Fellow at Princeton University, and the recipient of a Whiting Writers’ Award. She lives in California’s Napa Valley with her daughter and husband.

Lightning on the Sun
Robert Bingham

The End of Manners
Francesca Marciano

The Loves of Judith
Meir Shalev

The Umbrella Country
Bino A. Realuyo

The Shadow of the Crescent Moon
Fatima Bhutto

In the Pond
Ha Jin

Never
Ken Follett
Back to Top