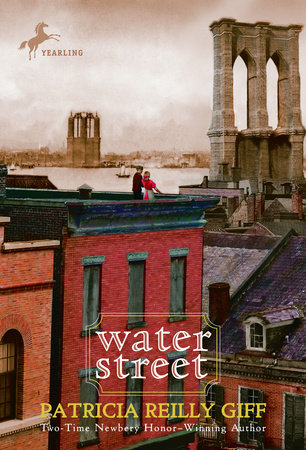 In Nory Ryan’s Song, a terrible blight attacks the potato crops in Ireland where the Ryan family has lived for generations. Now Nory’s family is split apart by the great hunger that has overtaken their native land, and it is with bold determination that Nory finds a way to save her family, and to join the thousands of Irish men, women, and children who are making their way to America.

Maggie’s Door offers even greater challenges to Nory. She is left with the responsibility of caring for Patch, her younger brother, and Granda on an arduous journey to America. Nory and her friend, Sean, unknowingly board the same ship to New York– Nory as a passenger in the steerage with Patch and Granda, Sean as a cook’s helper in the galley– and they do not meet up until late in the journey.

Set in 1875 in Brooklyn, Nory and Sean Mallon have married and set up housekeeping in a small apartment in Water Street. Thirteen-year-old Bird, the youngest of the three Mallon children, is in school, but wants more than anything to be brave enough to follow in her mother’s footsteps and become a healer. Her brother, Hughie, has disappointed the family by joining a street gang. When Thomas Neary moves in upstairs, Bird sees a different kind of hardship and learns a lot about family, friendship, and the true meaning of courage.

Patricia Reilly Giff is the author of many beloved books for children, including the Kids of the Polk Street School books, the Friends and Amigos books, and the Polka Dot Private Eye books. Her novels for older readers include A House of Tailors, Nory Ryan’s Song, and the Newbery Honor Books Lily’s Crossing and Pictures of Hollis Woods. Her most recent book is Eleven, a rich story about identity, family bonds, and a friendship between a girl who can’t stop reading and a boy who can’t begin. She lives in Trumbull, Connecticut.

For more information on the author, visit www.patriciareillygiff.com

Ask students to research the treatment of the Irish in 19thcentury America. They can begin by logging on to a Web site about Irish immigrants in America at that time: www.kinsella.org/history/histira.htm. Have them consider and discuss the following questions: Why did Americans resent the Irish? How did the Irish respond to Americans who treated them poorly? How did the Irish position in America change by the turn of the century?

Courage–Ask the class to define courage. How does it take courage for Maggie to leave her family and go to America in Nory Ryan’s Song? What does Nory learn from Anna Donnelly about courage? There are times in Maggie’s Door that Nory almost loses her courage. How does the image of Anna’s face give Nory the courage to continue her journey? At what point in the novel does Nory display the greatest strength and courage? Discuss how Nory and Sean give each other courage.

In Water Street, Nory and Sean are married with three children of their own. Which of Nory and Sean’s children display the most courage? What does Bird learn from her mother about courage? Discuss how Thomas offers Bird a different kind of courage.

Fear–Ask the class to discuss how the potato famine created an epidemic of fear throughout Ireland. How does Nory deal with fear in Maggie’s Door? In Water Street, Nory and Sean have settled in Brooklyn. What type of fear do they face in their new life? Contrast how Bird, Hughie, and Thomas deal with fear. Discuss how the fears of immigrants today might be similar to the fears experienced by the Irish immigrants in the 1800s.

Hope–Engage the class in a discussion about the relationship between hope, fear, and survival. Explain why life seems hopeless to Nory and Patch in Nory Ryan’s Song. How does Mrs. Mallon give up hope in Maggie’s Door? How are Anna’s hopes expressed through Nory? Discuss how Bird is a symbol of hope for her family in Water Street. How does Thomas find hope through his writing?

Belonging–There are many types of belonging expressed in the three novels–belonging to a family, to friends, to a native country, and to an adopted country. Ask students to discuss passages in each novel that best represent these types of belonging. Describe the sense of belonging that Thomas feels in Water Street when he is with the Mallon family.

Sacrifice–The Irish made great sacrifices during the potato famine. Engage the class in a discussion about their sacrifices. In Nory Ryan’s Song, Anna is willing to give her coin to Nory. What does Anna mean when she says to Nory, “I will give you the coin, but you will pay for it another way”? (p. 8) Why is Nory willing to sacrifice her future by staying with Anna? What sacrifices does Anna make by insisting that Nory go to America?
What sacrifices does Nory make in Water Street? How do Bird and Thomas make sacrifices for one another?

Family–In Nory Ryan’s Song, Maggie says to Nory, “You are the heart of the family with your songs.” (p. 26) Then she describes Celia as “loyal and true.” (p. 26) Discuss with the class whether Maggie is correct in her assessment of her sisters. At what point in Maggie’s Door is it evident that Nory and Sean will become a family? How does Nory remain the heart of her family in Water Street? Thomas feels abandoned because he doesn’t have a mother, and his father spends so much time in local bars. How does the Mallon family give Thomas the courage to ask his father for the truth regarding his mother? Discuss how Thomas gains a sense of family through his writing.

Language Arts–Nory can be considered bold, dauntless, and brave, the three characteristics that best describe some of the female characters in Irish mythology. Send students to the library to locate an Irish myth. Then have them write a short paper that compares Nory to the main character of the myth.

In Water Street, Sean Mallon gives Bird a copy of Aesop’s Fables. She says that the stories are about animals, but are really about people. Ask students to use books in the library or sites on the Internet to locate an Aesop’s Fable that best describes the relationship between Bird and Thomas. Share the fable in class.

Science/Health–In Nory Ryan’s Song, Anna Donnelly teaches Nory about her cures, and in Water Street, Nory relays the information to Bird. She uses “ivy for burns, comfrey for fever, foxglove for heart pain, laurel leaves for ringworm, houseleek for the eyes, the web of a spider for bleeding.” (p. 145) Have students find other plants used for medicinal purposes. Then have them create an illustrated booklet that describes the plants and their uses that Nory might give to Bird. Include an appropriate title and a dedication page to Anna.

In Water Street, Bird is called to help a family that has scarlet fever. Find out the causes, symptoms, and treatment of scarlet fever. Why was it such a devastating disease in the 1800s? Make a poster that might appear in the windows along Water Street that warns people about scarlet fever.

Social Studies–In 1882 Ellis Island became the processing center for all immigrants seeking entrance into the United States. Send students on a virtual field trip to the Ellis Island Museum (www.ellisisland.com). Ask them to find out why Ellis Island became known as the “Isle of Tears.” Instruct students to write a short paper entitled “Ellis Island: An American Historic Treasure.”

In Water Street, Sean Mallon, Bird’s father, is helping to build the Brooklyn Bridge. Research the history of the bridge, the actual construction, and how the bridge changed the lives of people in Brooklyn. Write an article that might have appeared in the Standard Union or the Brooklyn Daily Eagle on the day the construction began.

Art–In Nory’s Ryan’s Song, Maggie draws a picture that communicates her new life and her hopes and dreams for her family. Nory finds great comfort and joy in the picture. Have students create a picture that Nory might draw for Anna that tells about her new life in America and at the same time expresses her love for Anna.

Tell students that the leaves on the four-leaf clover represent hope, faith, love, and luck. Ask each student to make a large four-leaf clover and draw a scene from Nory Ryan’s Song, Maggie’s Door, and Water Street that best symbolizes each leaf. How is the picture different for the three novels?

Music–Engage the class in a discussion about the importance of music in Nory’s life. In Nory Ryan’s Song, she often sings to Patch to give him courage. Have students find examples of Irish folk songs, lullabies, or ballads that could be considered songs of courage. Then ask them to select a song that Nory might sing to Anna on the day that she leaves for America. In Water Street, Thomas Neary is like a son to Nory Mallon. What song might she give to Thomas on the day that he finds out the truth about his mother?

Drama–Annie Moore, a 15-year-old Irish girl, came to America several years after Nory Ryan does in Maggie’s Door, and was the first immigrant to pass through Ellis Island. Ask student to use books in the library or sites on the Internet to find out more about Annie Moore (www.irishaci.org/anniemoore.html). Then have them stage a dialogue between Nory and Annie.

In Water Street, Thomas Neary is valedictorian of the class of 1876 and receives a scholarship to the School of the Arts. Write and deliver the speech that Thomas might give at graduation.

In Nory Ryan’s Song, Giff provides a glossary of Irish words with pronunciations at the beginning of the novel. Ask students to search for other unfamiliar words that specifically refer to the Irish and the historical setting of the book. Such words may include glen (p. 3), currachs (p. 27), and praties (p. 64).

The Great Irish Famine
www.nde.state.ne.us/SS/irish_famine.html
This site provides a curriculum guide for teaching about the potato blight.

Irish Immigrants in America
www.kinsella.org/history/histira.htm
This site offers the point of view of Americans to the influx of Irish immigrants in the 19th century.

Brooklyn Expedition
www.brooklynexpedition.org
This site discusses the history and interesting facts about the Brooklyn Bridge.

A Tiny Piece of Sky

The Beef Princess of Practical County

Ghosts I Have Been
Back to Top