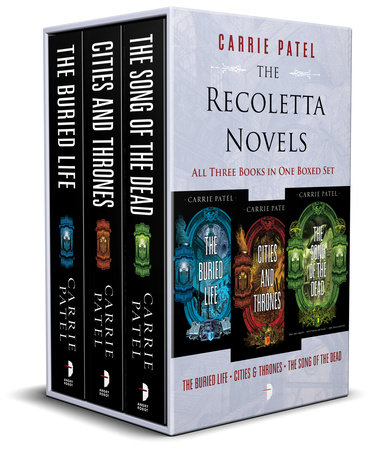 About The Recoletta Novels (Limited Edition)

Murder, revolution and secrets of a lost past threaten a vast underground city, in the complete collection of the Recoletta novels.

Collects The Buried Life, Cities and Thrones, and The Song of the Dead in a single volume.

The gaslight and shadows of the underground city of Recoletta hide secrets and lies. When Inspector Liesl Malone investigates the murder of a renowned historian, she finds herself stonewalled by Recoletta’s top-secret historical research facility. When a second high-profile murder threatens the very fabric of city society, Malone and her rookie partner must tread carefully, lest they fall victim to not only the criminals they seek, but the government which purports to protect them. Knowledge is power, and power must be preserved at all costs…

The dark, forbidden knowledge of how the city came to be founded has been released into the world for all to read, and now someone must pay. Inspector Liesl Malone is on her toes, trying to keep the peace, and Arnault’s spy ring is more active than ever. Has the city’s increased access to knowledge put the citizens in even more danger? Allegiances change, long-held beliefs are adjusted, and things are about to get messy.

The Library Accord has finally been signed by Recoletta and its neighbours, but the fight for power continues. A desperate attempt to save the spymaster Arnault from execution leads to Malone’s arrest and Jane’s escape. They must pursue each other across the sea to discover a culture that has held together over the centuries. There they will finally learn the truths about the Catastrophe that drove their civilization underground. 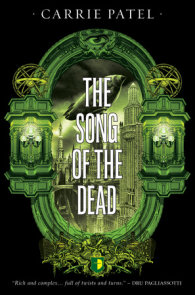 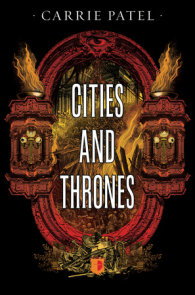 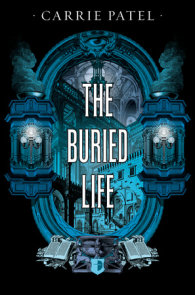 See all books by Carrie Patel

“Carrie Patel’s post-Catastrophic world has become progressively more rich and complex over the course of her trilogy… [This] engaging political fantasy is full of twists and turns, and The Song of the Dead especially stands out for its imaginative, memorably described characters and settings.”
— Dru Pagliassotti, author of the Clockwork Heart trilogy

“The Buried Life is a dark, imaginative steampunk gem – tailor-made for mystery fans and history nerds alike, with plenty of cops-and-robbers to keep you on your toes. This is a very fine contribution to the genre.”
– Cherie Priest, author of Boneshaker and Maplecroft

“In the riveting Recoletta series, Carrie Patel is a cultural excavator incisively carving out the recesses of human nature, digging up fossils that reveal both the physical geography of a collapsed United States as well as the existential cartography of humanity. The trilogy is a moving paean wrapped in the rhythms of a steampunk dystopian alternate history that rings with pain, hope, and resistance in a song that will awaken even the dead.”
– Peter Tieryas, author of United States of Japan and Bald New World

“With Regency-era sensibilities and Agatha Christie’s flair for the subtle conundrum, Patel’s debut novel introduces readers to a subterranean city of the future, centuries after what is dubbed ‘The Catastrophe’, and beautifully manages the delicate balance between entertainment and social commentary. The subtly fantastical story is resplendent with surprisingly deep villains, political corruption, and a gripping whodunit feel.”
– Starred Review, Publishers Weekly

“Fans of steampunk alternate histories will enjoy this book, and I suspect that readers of the lighter end of the dystopian genre will too. It’s quick, filled with enjoyable characters, and contains enough socio-political reflectiveness to give you something to chew on. It’s a great debut effort, and, even better, the first in a series.”
– Barnes and Noble

“Patel does it again. This is another great story that takes us from the buried city of Recoletta, to the farming communes, onto a flotilla of ships across the ocean and the Continent where Arnault’s big secret is revealed. I found the resolution of the plot arc very satisfying and Patel did a great job of tying up all the individual plot threads into one satisfying conclusion. It is hard to say much more without risking giving too much away. Suffice to say you will need to find out for yourself.”
– The Qwillery