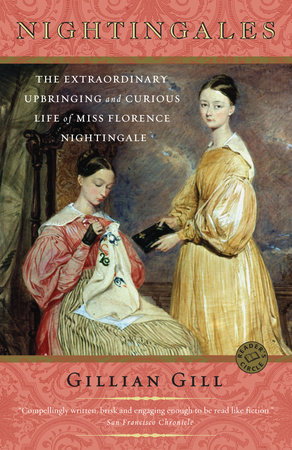 1. Florence Nightingale grew up in a privileged and progressive milieu at the time the British Empire was reaching the zenith of its power and when Christian evangelicalism was changing the whole character of society. What resemblances do you see between British society in Nightingale’s day and American society now?

2. In the course of Florence’s youth, as a result of her father’s wealth and her mother’s social skills, the Nightingale family rose to become one of the legendary “ten thousand” families who ruled England and its far-flung empire. In her long fight to improve the health and quality of life for her fellow citizens, how much do you think Nightingale was impeded and how much was she helped by her family’s social prominence?

3. Florence Nightingale was brought up in a deeply religious family and felt very close to God, even as a small child. She wrote in her private notes that on three different occasions she heard the voice of God calling her to His service. Discuss the importance of Nightingale’s sense of divine mission and the character of her spirituality.

4. Florence Nightingale had a deep but difficult relationship with her only sibling, Parthenope Nightingale Verney. What did the sisters have in common? Why were they so often at odds?

5. Florence Nightingale never really forgave her parents, especially her mother, Fanny Nightingale, for preventing her from undertaking full-time work in hospitals when she was in her twenties. Do you blame the Nightingale parents?

6. Florence Nightingale’s relationships with other women were rarely smooth. Both in letters and in her unpublished work Suggestions for Thought,she frequently said how much she despised women of her own class. Talk about her relationships with her cousins Hilary Bonham Carter and Marianne Nicholson, her aunt Mai Shore Smith, and her friends Mary Clarke Mohl and Selina Bracebridge.

7. What were the key qualities that allowed Florence to succeed when she went out to Scutari in Turkey during the Crimean War?

8. The work of the women nurses during the Crimean War was a turning point in the history of the nursing profession. What was the work of women nurses like before Nightingale’s era, and why was it so difficult to launch nursing as a profession for women of all classes?

9. Florence Nightingale was revered and even adored by many who worked with her in the army hospitals, yet she also aroused bitter hostility. Even Nightingale’s admirers have agreed that her relationships with other nurses while at Scutari and in the Crimean peninsula were often bitterly contentious. The bitter tirades against Nightingale by other Crimean War nurses, notably Mother Frances Bridgeman, Mary Stanley, Martha Clough, and Elizabeth Davis, have always provided the ammunition for those who attack Nightingale as a power-hungry, self-publicizing harpy. What was it about Florence Nightingale that made her so controversial?

10. Florence Nightingale’s work during the Crimean War made her a legend in her lifetime. How did she react to her fame? How did she use it?

11. In 1857, when she was thirty-eight, Florence Nightingale’s health collapsed. For decades she was a bedridden invalid, admitting only chosen people to see her, one on one, and she never again had anything approaching a normal social life. Some have diagnosed Nightingale as suffering from an organic disease, most probably chronic brucellosis. Others have diagnosed her as a hysteric and hypochondriac who used physical symptoms to get her way. Recently, a suggestion has been made that she suffered from bipolar disease. What is your diagnosis of Nightingale’s illness, and what do you think she gained and lost from her fifty-three years of invalidism?

12. Do you think Florence Nightingale was a heroine? Do you think her life is still meaningful for us today? Do you like her, or just admire her?

Unto the Sons
Gay Talese

Kafka Was the Rage
Anatole Broyard