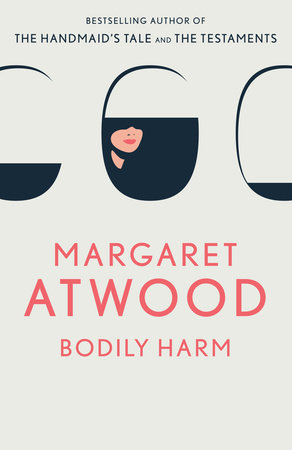 A powerfully and brilliantly crafted novel, Bodily Harm is the story of Rennie Wilford, a young journalist whose life has begun to shatter around the edges. Rennie flies to the Caribbean to recuperate, and on the tiny island of St. Antoine she is confronted by a world where her rules for survival no longer apply. By turns comic, satiric, relentless, and terrifying, Margaret Atwood’s Bodily Harm is ultimately an exploration of the lust for power, both sexual and political, and the need for compassion that goes beyond what we ordinarily mean by love.

1. Rennie has a series of dreams in which her grandmother complains that her hands are missing. Rennie, a writer, interprets this as dream-evidence that her grandmother is dead. What does a loss of one’s hands represent? What does it mean for a writer in particular?

2. Atwood writes, "The number of things Rennie thinks ought to happen to her in foreign countries is limited, but the number of things she fears may happen is much larger." For Rennie, which type of experience proves to be more transformative?

3. "Other people make statements, I just write them down," claims Rennie. Consider the difference between observing and reporting actions as opposed to engaging in them. By observing, does one become a de facto participant?

4. In St. Antoine, Rennie is an "other" fivefold: she is single, a woman, a reporter, a white, and a Canadian. Yet each of her distinct identities frequently clash with one another. As a white Canadian, she allied with a strong majority; as a single woman, she represents a vulnerable minority. At times, however, her status as both a Canadian and a woman earns her the epithets "sweet" and naive". How do the many layers of her outsiderdom intersect? How do they reinforce or invalidate each other?

5. After her relationship with Jake, Rennie finds herself infatuated with two men–Daniel and Paul–each of whom offers her an incomplete sort of relationship. What does each have to offer her? How do they complement each other?

6. The specter of the man who broke into her apartment and left a length of rope behind follows Rennie on her travels. Who is this man? What does he represent?"

7. Compare Jocasta and Lora. What insights does each offer into the nature of women’s’ friendships? The alliances that women form? The kinds of choices women make throughout their lives?

8. After Minnow’s assassination, Rennie realizes that he asked her to write about St. Antoine "so there would be less chance of this happening to him." What control do words–via the media and the press, have over the course of unfolding events?

9. Consider Jocasta’s and Rennie’s assessments of men’s and women’s relationships and the new crises and anxieties that sexual equality poses. Do you agree with their perception of the situation? How, if at all, has sexual politics changed in the sixteen years since this novel was written?

10. While imprisoned, Rennie discovers that after listening to distant screams long enough, her ear tricks her brain into thinking she’s hearing a party. What other means does her brain and body have of enabling her to survive her imprisonment? How does the human body cope with assaults imposed from within (cancer, disease, loneliness) as opposed to those from outside from outside (torture, prison)? Does she have more control over one than the other?

11. On the plane ride home, Rennie notes a significant change. She realizes, however, that what has changed are not the ice cubes, the people, and the world around her, but the way she notices them. How have her experiences changed her? What events in your life cause you to view everyday sights and events differently?

Margaret Atwood was born in 1939 in Ottawa and grew up in northern Ontario, Quebec, and Toronto. She received her undergraduate degree from Victoria College at the University of Toronto and her master’s degree from Radcliffe College. The daughter of a forest entomologist, Atwood spent a large part of her childhood in the Canadian wilderness. At the age of six she began to write “poems, morality plays, comic books, and an unfinished novel about an ant.” At sixteen she found that writing was “suddenly the only thing I wanted to do.” Throughout her career, Margaret Atwood has received numerous awards and several honorary degrees including the Canadian Governor General’s Award, Le Chevalier dans l’Ordre des Arts et des Lettres in France, and the National Arts Club Medal of Honor for Literature. She is the author of more than thirty volumes of poetry, nonfiction, and fiction, including children’s books, and short stories. Her most recent works include The Handmaid’s Tale (1986), Cat’s Eye (1989), and Alias Grace (1996), the story collection Good Bones and Simple Murders (1994), and a volume of poetry, Morning in the Burned House (1995). Ms. Atwood’s work has been published in more than twenty-five countries. She has traveled extensively and has lived in Boston, Vancouver, Montreal, London, Provence, Berlin, and Edinburgh. Margaret Atwood now lives in Toronto with novelist Graeme Gibson and their daughter. Bodily Harm is her fifth novel.
Learn More About Bodily Harm
print

How to Set a Fire and Why
Jesse Ball