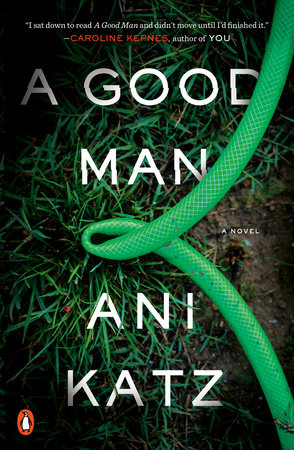 An Introduction to A Good Man

“Look, I sighed. I work very hard for us. I make sacrifices and put in a lot of long hours to make sure we have what we need. And I’m not saying that to make you feel guilty—it’s just what I do, because I want us to be happy. But when I do come home, I expect to be treated a certain way. It shouldn’t be that hard for you.” (page 130)

Thomas Martin was a devoted family man who had all the trappings of an enviable life: a beautiful wife and daughter, a well-appointed home on Long Island’s North Shore, a job at a prestigious Manhattan advertising firm. He was also a devoted son and brother, shielding the women in his orbit from the everyday brutalities of the world.

But what happens when Thomas’s fragile ego is rocked? After committing a horrific deed—that he can never undo—Thomas grapples with his sense of self. Sometimes he casts himself as a victim and, at other times, a monster. All he ever did was try to be a good man, but maybe if he tells his version of the story, he might uncover how and why things unraveled so horribly.

1. The first line of the novel is, “The billy club arrived with the first shipment of Christmas presents that year, one package among several stacked on the front porch.” Why do you think the author chose to begin the novel this way? What can you learn about Thomas and his life from early descriptions of his house and his routines?

2. Throughout the novel, there are indications that Thomas may not be the man he purports to be. Did you at any point suspect Thomas might be capable of the acts he commits? What clues can you identify that give us insight into how the story will end?

3. We only get Thomas’s side of the story, but we learn a lot about Miriam through his eyes, and through her dialogue. Why do you think Miriam fell in love with Thomas, and why has she chosen to remain with him?

4. Thomas’s sisters are highly unusual, almost childlike in their arrested state of development. Why do you think they are the way they are? How does their development relate to Thomas’s persona?

5. Thomas is an opera buff, and the author threads many operatic references through the text. What effect does this have on the narrative? How did it influence your conception of Thomas’s character?

6. Does the story of A Good Man remind you of any real-life stories you’ve heard? In what way? What are some of the common elements between these similar stories?

7. Is Thomas a good man? Why or why not? What would the definition of “a good man” be, both in your estimation, and in the world of the novel?

8. What does the author’s treatment of Thomas’s character reveal about traditional notions of masculinity? Did the book make you think about the different roles that men and women play in heteronormative domestic spheres? Do Thomas and Miriam seem to have differing ideas about their own gender roles?

Red at the Bone
Jacqueline Woodson
Back to Top