Love in the Time of Cholera (Illustrated Edition) Reader’s Guide 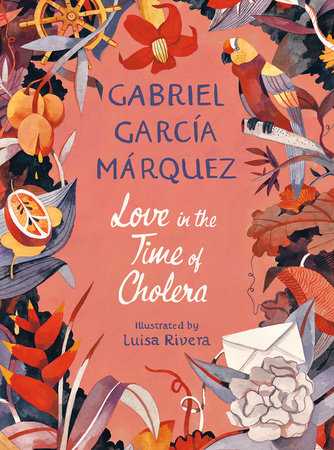 Love in the Time of Cholera (Illustrated Edition) Reader’s Guide

“A rich, commodious novel whose narrative power is matched only by its generosity of vision.” –The New York Times

The introduction, discussion questions, suggested reading list, and author biography that follow are intended to enhance your group’s reading of Love in the Time of Cholera, Gabriel García Márquez masterful novel of unrequited love.

In the late 1800s, in a Caribbean port city, a young telegraph operator named Florentino Ariza falls deliriously in love with Fermina Daza, a beautiful student. She is so sheltered that they carry on their romance secretly, through letters and telegrams. When Fermina Daza’s father finds out about her suitor, he sends her on a trip intended to make her forget the affair. Lorenza Daza has much higher ambitions for his daughter than the humble Florentino. Her grief at being torn away from her lover is profound, but when she returns she breaks off the relationship, calling everything that has happened between them an illusion.Instead, she marries the elegant, cultured, and successful Dr. Juvenal Urbino. As his wife, she will think of herself as “the happiest woman in the world.” Though devastated by her rejection, Florentino Ariza is not one to be deterred. He has declared his eternal love for Fermina, and determines to gain the fame and fortune he needs to win her back. When Fermina’s husband at last dies, 51 years, 9 months, and 4 days later, Florentino Ariza approaches Fermina again at her husband’s funeral. There have been hundreds of other affairs, but none of these women have captured his heart as Fermina did. “He is ugly and sad,” says one of his lovers, “but he is all love.”In this magnificent story of a romance, García Márquez beautifully and unflinchingly explores the nature of love in all its guises, small and large, passionate and serene. Love can emerge like a disease in these characters, but it can also outlast bleak decades of war and cholera, and the effects of time itself.

1. Why does García Márquez use similar terms to describe the effects of love and cholera?

2. Plagues figure prominently in many of García Márquez’s novels. What literal and metaphoric functions does the cholera plague serve in this novel? What light does it shed on Latin American society of the nineteenth century? How does it change its characters’ attitudes toward life? How are the symptoms of love equated in the novel with the symptoms of cholera?

3. What does the conflict between Dr. Juvenal Urbino and Florentino Ariza reveal about the customs of Europe and the ways of Caribbean life? How is Fermina Daza torn between the two?

4. Dr. Urbino reads only what is considered fine literature, while Fermina Daza immerses herself in contemporary romances or soap operas. What does this reveal about the author’s attitude toward the distinction between “high” and “low” literature. Does his story line and style remind you more of a soap opera or a classical drama?

5. After rejecting Florentino’s declaration of love following her husband’s funeral, why is Fermina eventually won over by him?

6. Why does a change in Florentino’s writing style make Fermina more receptive to him?

7. What does Florentino mean when he tells Fermina, before they make love for the first time, “I’ve remained a virgin for you”?

8. Why does Florentino tell each of his lovers that she is the only one he has had?

9. What does Florentino’s uncle mean when he says, “without river navigation there is no love”?

10. Do Fermina and Dr. Urbino succeed at “inventing true love”?

11. Set against the backdrop of recurring civil wars and cholera epidemics, the novel explores death and decay, as well as love. How does Dr. Urbino’s refusal to grow old gracefully affect the other two characters? What does it say about fulfillment and beauty in their society? Does the fear of aging or death change Florentino Ariza’s feelings toward Fermina Daza?

12. Compare the suicide of Jeremiah de Saint-Amour at the beginning of the book with that of Florentino’s former lover, América Vicuña at the end. How do their motives differ? Why does the author frame the book with these two events?

13. Why is Leona Cassiani “the true woman in [Florentino’s] life although neither of them ever knew it and they never made love”?

14. When Tránsito Ariza tells Florentino he looks as if he were going to a funeral when he is going to visit Fermina, why does he respond by saying, “It’s almost the same thing”? (Used by permission of Penguin Books.)

Gabriel García Márquez was born in Aracataca, Colombia, in 1927. He attended the University of Bogotá and went on to become a reporter for the Colombian newspaper El Espectador. He later served as a foreign correspondent in Rome, Paris, Barcelona, Caracas, and New York. Winner of the Nobel Prize for Literature in 1982, he is the author of several novels and collections, including No One Writes to the Colonel and Other Stories, The Autumn of the Patriarch, Innocent Erendira and Other Stories, Chronicle of a Death Foretold, The General in His Labyrinth, Strange Pilgrims, Love and Other Demons, and most recently, Memories of My Melancholy Whores, as well as the autobiography Living to Tell the Tale.
Learn More About Love in the Time of Cholera (Illustrated Edition)
print

The Handmaid’s Tale and The Testaments Box Set
Margaret Atwood

All the Names They Used for God
Anjali Sachdeva

The Marquise of O and Other Stories
Heinrich Von Kleist

The Lady of the Camellias
Alexandre Dumas fils

Possession
A. S. Byatt
Back to Top